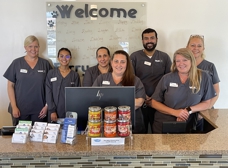 ,I can only speak to my experience with VCA Imperial Point but let this serve as a cautionary tale of what can go wrong when you are most vulnerable. I notified them 2 days after my beloved Bella passed away last weekend to request my monthly auto-bill of over $60 for the "Senior Dog Bundle", which included something to the effect of 5 routine annual visits, not including tests or bloodwork. I also asked to them stop the monthly auto bill and mailing out of a flea/tick dosage.

With 5 months left on the year long plan, that is over $300 for services that will no longer be needed since Bella is dead and I have no other living dogs, which I reminded them of.

As a grieving doggy daddy i was shocked that after explaining the situation to the pleasant woman who answered the phone, I was put on hold so she could go talk to her Manager.

When she returned to the phone, I was informed I was responsible for the remaining balance and I could apply those months to another pet if I had one.

I relayed this story to multiple people - dog owners locally, out of state, non dog owners, etc. There is not one person who was not offended, shocked, angered, and disgusted by the response VCA gave me.

So I am going to be sharing this story any and every where I can, and repeatedly.

The funny thing is that it is not even good business - VCA Imperial Point was willing to let a dog owner who has brought 2 dogs to that clinic over the years and would have brought any dog I may get down the road for years to come walk away angry and disgusted in order get $300 for services for the next 5 months for a dead dog.

I welcome VCA to reconsider and contact me, Jeff Roberts.

Horrible horrible vets office. They killed a kitten who needed their help. Racked up the bill and killed her. Would not listen to the person who brought the baby in. Her life meant nothing to them as she was a homeless little kitten.

Dr. Buzzetti has been the most caring, available, and up to date Veterinarian I have ever been to. What other Vet can you call at 1am when your beloved pet is having an emergency or who will come in on their day off give the best possible care to your pet? Every time Bella needs surgery Dr. B makes sure to ask me about using t a laser during and after to minimize the pain. I have been going to his clinic for years. I know it transitioned to a a VCA animal hospital and corporate stepped in and changed policies and procedures throughout the clinic but every time I have seen Dr. B since, Bella has received the same amazing care. I am sad that he will be leaving but I am so so excited to hear that he is opening a new state of the art facility, Animal Medical Center of Jupiter, in Palm Beach soon!! I will definitely be commuting!

If you board your beloved pets at Imperial Point Animal Hospital BEWARE!!

This is an unfortunate story of employees being INSENSITIVE, CARELESS and NEGLIGENT !

During vacation, January 18, 2013, I entrusted my 2 year old orange and white tabby cat, Aubie, to their care.

I called on Sunday morning, Jan 27th to let them know I was coming at noon to pick him up......they told me they didn't have a pet by his name and asked me if I were sure I dropped him off at the Commercial Blvd location.  Moments later standing in the lobby of the animal hospital, I'm told by a very insensitive employee that someone must have picked him up mid-week and he was no longer there.

According to their records, he had been fed Wednesday night but was not in his cage for his feeding early Thursday morning.  This should have drawn a bright RED flag.  But it didn't. I was told it was Imperial Point policy to pick up after 2pm.  So he's there late Wed night but not early Thursday morning and not a single veterinarian or employee had concern for his whereabouts, care, health or well-being.

It appears that a careless employee left his cage open Wednesday night. It's now Sunday and they haven't even realized he's missing!

I stood in the lobby while  they checked their records and hoped my cat would show-up.  During that time one of the veterinarians, a woman, not to call names, got off duty.  She walked right by me, her pet in tow, and didn't even acknowledge me or the horrible situation.  I thought that was very insensitive and cold for an animal lover.

After a couple of painful, stressful hours, I sat down near the pet supplies opposite the lobby. I made a few phone calls letting family know that Aubie was missing.  Thankfully, while hearing my voice he began crying out from behind the storage cabinets. Due to their negligence, My poor kitty had been under those cabinets for 4 days with no food or water and only one door away from traffic on Commercial Blvd.

Insensitive, Careless and Negligent....... Beware of the lack of care at Imperial Point Animal Hospital.

This is an amazing facility. It is open on Sundays which is a huge convenience. I have been here multiple times with my animals and have always left with a good experience and reasonable bill. They never suprise you and the technology they offer is very advanced. My cat had a laser surgery and it was price comparable to other vets in my area that don't even have a laser. They also offer diagnostics that are very comprehensive and found a medical issue that my previous vet missed because they don't offer the same testing. Thank you for giving my pets the best care possible!

I have taken both of my cats there on Sundays (when most vetrinarian's offices are closed). The staff and doctors have been so helpful and caring. I was very pleased with the excellent service we received. I would highly recommend this animal hospital. They also offer lots of technology -- you can monitor your animal's care and meds on line.

If you are looking for an animal hospital for your pets in NE Fort Lauderdale..Imperial Point Animal Hospital and Dr. Robert Buzzetti is your place..I have been bringing my pets to IPAH for years and I can not say enough about the care that my pets recieve from Dr. Buzzetti and his staff..the hospital is state of the art in animal diagnostics and the facility itself is always impecably clean and the staff is very friendly and professional...their boarding facilities are unlike any other that you have taken your pets to..the one on one care that they recieve is worth it weight in gold..if you have ever had to leave your pets behind while you are on vacation or away on business..rest assured they are being well taken care of and you will notice a difference when you pick them up..they are happy and well groomed and that alone for a pet owner really does help take the guilt away when you do have to board them..as far as Dr. Buzzetti is concerned, he is caring and knowledgable and treats your pets as if they were his own and the office is open 7 days a week and for any pet owner that has had to take their pets on the weekend to a emergency pet clinic and often not had a very good experience or work untradional hours at your job..this is a huge plus..knowing your clinic is open 7 days a week and always has someone on call to answer your questions 24 hours a day..so please..if you are new to the area or looking to change vet's..you should schedule an appointment to meet him and his staff and you won't be disappointed..I assure you!!

FOR ALL YOU DOG (AND CAT) LOVERS WHO CONSIDER YOUR PET A FAMILY MEMBER, IMPERIAL POINT IS THE BEST PLACE TO BRING THEM. I BROUGHT ZIGGY, MY FRENCH BULLDOG THERE TO BE NEUTERED AND IT WAS A BREEZE (MAYBE HE DIDN'T THINK SO!).

THE STAFF IS KNOWLEDGEABLE, WARM AND MAKES YOU FEEL AT EASE. AND THE PLACE IS SPOTLESS.

I HOPE ANYONE WHO NEEDS TLC FOR THIER LOVED ONES TAKES ADVANTAGE OF THIS WONDERFUL VETERINARY PRACTICE.

I am new in town and I took my cat Boo-Boo in for his annual exam. What a impressive facility and the staff was so kind to us both. I have referred many friends to there and they are equally satisfied.

My dog Milo had a fever of 104 and he was not eating or drinking. From the miniute I walked through the door the receptionist mad me feel as though I was the most important person as was Milo. Dr. Buzzetti made me feel comfortable knowing that Milo is all I have he assured me he would do all he could to get to Milo's discomfort. They called me every 2 hours with an update with Milo's condition. Milo got better and came home the next day. I would recommend Imperial Point Animal Hospital to anyone who loves their pet(s).