The King Of Kia's

Services/Products
ABOUT​ JACK MILLER KIA​ IN​ NORTH KANSAS CITY,​ MO Jack Miller KIA​ has been proudly providing quality service for all your automotive needs since 1961. From sales, to service, to parts, taking care of you has been Jack Miller KIA's number one goal for over 50 years.​ Jack Miller KIA has become one of the elite dealerships attaining the Five Star Award For Excellence in Customer Sales and Service Satisfaction and Dealer Rater's 2016 Dealer of the Year in the state of Missouri. There are plenty of awards a dealership can win, plenty of plaques we can put on our walls, but we at Jack Miller KIA believe that no dealership award is more important than one that is bestowed upon us by our customers. That's what makes Jack Miller KIA's Five Star Award Of Excellence such an honor, and the KIA corporation dealerships who receive it, so elite. Through the sales and service evaluations, our customers decide which dealerships earn the award, and which dealerships fall short. After all, the customer is the best judge of the quality of the sales and service experience that they receive. What does the Five Star Award Of Excellence mean for us? When a dealership earns the Five Star Award it means the entire dealership staff has demonstrated an extraordinary commitment to its customers. It means they will find sales representatives who treat them with respect and consideration. It means you'll find highly qualified service technicians with the most recent training and the most advanced equipment and tools. You will also find employees throughout our dealership practicing KIA's "Customer One" philosophy - Exceeding Customer's Expectations Every Day. If you are in the market for a New or quality Pre-Owned vehicle, we have a strong and committed sales staff with many years of experience satisfying our customers' needs. If you are new to the area, and are simply looking for a quality automotive service department we would love to take care of you & your car!
Brands
All Major brands of used auto's, CPO Kia's, Kia
Payment method
discover, master card, visa, mastercard, check, debit, all major credit cards, amex
Location
2900 Burlington St, North Kansas City, MO, 64116 5 minutes from downtown
Neighborhood
Northland
Amenities
It is our award winning parts department that is the talk of the Midwest. Dennis Faltermeier, the parts manager has put together the A Team and they are amazing. From Oklahoma to Iowa and Nebraska to Illinois. His A team supplies Kia & Isuzu parts to Dealerships, Body Shops, Automotive Service Centers, Hertz Rental Cars, Service Stations just to name a few. No one is too large nor too small, they all get same high quality customer service and the right part on time every time! We have a outstanding detail shop. If you would like your car to look new again, look no further. The guys in the detail shop do an exceptional job on a car, just have to book in advance. They have a good following of customers that like keeping their auto looking new till they are ready to trade. That is another reason our used cars are a cut above the competitions.
Other Link 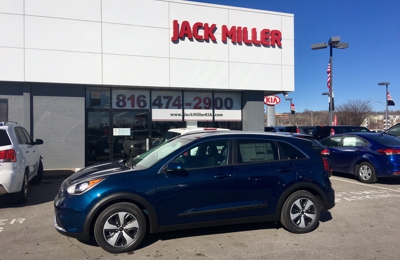 Just had a service visit and used the $19.95 oil Change Special that I seen on Facebook, just used my phone to show the coupon that was it. I've been using the service department for two years now and I must say, they do a great job! Good people and a great product!

I was elated at the level of Customer Service my family has received at Jack Miller Kia! From the Internet Sales Department to Finance! Also, their follow-up calls have been Great! They help keep us on track with the maintenance on our new car. We are so pleased!!! This is our second purchase at Jack Miller Kia, and we will be loyal customers for life! Check them out, you will be surprised!

I just bought a 2016 Kia Sportage SX AWD Turbo from Jack Miller Kia. The dealership was amazing and the Sportage is just crazy fun to drive. I have owned Toyotas for the last 15 years and I am amazed by the quality and performance of Kia's product compared to Toyota.

My experience at Jack Miller KIA was very pleasant

I bought a 2008 Kia Sorento for my daughter's 16th birthday. I needed something reliable for her 1st car. After driving it a few days, the passenger door open light kept coming on and beeping. I took it to another Kia dealership and was told that Jack Miller Kia had lied about the car not being in a previous wreck. The whole passenger door is hollow and must have sustained serious impact. The "managers" daughter owned the car previously and took great care of it. Hahaha! Do not trust this dealership.

Also, the other Kia dealership replaced a part that had been recalled. I would have expected Jack Miller Kia to have replaced the recalled part prior to selling the car to me. DO NOT BUY FROM THESE PEOPLE WHO RIP OFF TRUSTING CUSTOMERS.

I bought my Kia Forte in April 2011. My first impression was not a good one. I applied online and never received a called, not one. However, I decided to go down there instead because the price off the car was lower than all other Kia Dealerships around. When I got there, I told a gentleman that I had filled out an online application and never heard anything back. He was very apologetic and offered his help. He walked me to the car and told me all about it, he also showed me another car that I might like. I was amazed because he turned out to be the finance manager, Elford. I found that out when he was being paged for a customer and instead of just skipping on me to go make some money he found a salesman to help me out and told me that if he didn't take care of me, to let him know. I was able to buy my car and I still love it. I was back there recently for service and Elford is still there... and he remembered helping me out with my car. By the way I didn't have the best credit and Elford was able to get me financed. I did notice that a lot of the staff has changed since I was last in and they also remodeled the whole inside. It looks nice...especially the service waiting area. I was very impressed with the service team. Barry, Rick, and Tara were very nice. The service department seemed very busy but they never seemed like a question I had was an inconvenience. I will definitely buy my next car from them and get it serviced there too! Awesome experience even 2 years later!!! P.S.- If you want your car detailed plan ahead appointments fill up quickly, but it makes since because they do a great job, better than any other place I have ever taken my car.