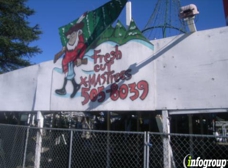 A local establishment that's been a neighborhood fixture for many years. Though they may not have the widest variety, they do have seasonal plants that are awesome. When they have hydrangea's, they are the largest I have ever seen. Love to support local small businesses.

My wife just received a huge bouquet of flowers for her birthday. Unfortunately, although overall most of the flowers were lovely, the main flowers at the front of the bouquet were withered and dead. Mistakes happen, but this is totally unacceptable. To add to this the florist didn't accept that the there was anything wrong and wanted us to bring the bouquet into the shop. This was a delivery order that now they wanted us to personally return! Only by being insistent on the phone and calling a second time did they send someone over.
About 15 minutes after the call, the original delivery guy arrived with a new vase display as a replacement. He was very apologetic and understanding.
If the owner had started the discussion with the word ""sorry"" and had listened to my wife, I'd never have been bothered enough to write this review.

So yesterday I went to my local flower shop here in N. Hollywood to buy my girlfriend flowers to be delivered on Valentines Day, just as I did last year, and the year before that. The SAME shop, Toluca Lake Flowers. I've been a patron of this place several times before as well for different occasions. They're a bit pricey, but their local, so I support. Now usually I've spent anywhere from $50-$100 there before, BUT because of the recession, like so many of us, I went in there with a budget of $30.

I was greeted by a nice lady who began to show be the different bouquets, of course starting with the most expensive, $300 for two-dozen, $125 for a dozen, and so on. I immediately told her about my measly $30 budget and she completely understood and dropped the pitch, and began to show me my options (which were almost none).

Finally she showed me a modest bouquet which was actually kinda perfect, however it was $50. I asked could they deliver it, and she said that there was a $10 delivery fee (which by the way I honestly don't remember paying there before). I told her thank you and that I would go somewhere else. Obviously this place was not in my budget.

She then asked where would they be delivered and I told it would be less than a mile round trip, like I said, this place was a local business I wanted to support. With this new information she then negotiated $45 which would include delivery. ""Wow!"" I thought. She really wanted my business. I caved and decided my baby was worth the extra $15, and proceeded to fill out the little card, and address while she ran my card.

I then noticed, who I assumed was her boss, inquire about the transaction that took place. He was hovering over her while she ran my card. I then heard him say something like ""$45? You're not charging him tax??"" In which she replied, ""Something, something, I gave him a deal."" At which point she handed me back my card and wished me a nice weekend. I was able to cross that off my list of things to do that day.

Cut to 15 minutes later when I get home and realize I have a voicemail. I check it and to my surprise it's that guy from the flower shop letting me know his employee had messed up and shouldn't have given me free delivery, as well as she didn't charge me tax, and that I needed to call him back to figure the situation out. I know right? WOW! The nerve of this douche!

So I call him right back and he goes on to tell that if I want the flowers to be delivered I have to go back and give $10 plus the tax I owe him. I begin to tell him that what he's is asking his really unfair especially since the transaction already took place and that I could have taken my business elsewhere, especially when his sales lady upsold me an extra $15. He then said, and I quote, ""You know what sir? You're not the TYPE of business I really want to have anyway."" Can you believe this A$$HOLE??
“And what TYPE might that be?” I asked.
“You know let me just do you and I a favor and cancel your order.”.Apparently this guy has a certain type that he only wants to do business with! In this economy no less!!

Anyway here's me venting, it just goes to show you that Valentines Day is just a bunch of BS, another shill holiday to get you to spend money. And apparently if you don't have enough of it then you're inferior to this capitalistic society.

My family and I went to pick up a Christmas tree, we had no idea that we would get a great deal and an amazing tree that the kids and wife love. Also if you need flowers, pointsettias and wreaths- you can get them there too!

flowers are a bit overpriced but are the nicest you can find in this area.

My mother sent me a flower arrangement to my office for my birthday. When they arrived, I noticed a couple droopy stems and my overall first impression was not exactly the pinnacle of freshness. Less than 48 hours later, all of the zinnia petals were limp and brown and the edges of the star gazer lilies appeared brown and stale.
I called the florist and they seemed annoyed but invited me to come and exchange. I did go over after work and they suggested I had placed them in some inferno or put them in front of a heat vent. In fact, I work in an office I find always a bit too cool. After suggesting that I was responsible for their sorry state, they whisked them away without another word and replaced them with a smaller, standard bouquet with significantly fewer stems than the one my mother bought. I felt disappointed they did not offer an in-kind exchange or allow me to choose a replacement.


Ok if you walk in & buy something already made up as they seem to have a decent selection & respond well to, ""I'll take that one & pay cash"".
However, DO NOT place a custom catalog order with them by phone or from the web page they are linked to. My only experience with that resulted in having to sit through a memorial service while looking at some abortion they had delivered in my name that looked like it was arranged by a day laborer. For $350.00 they could have just sent a big armful of flowers & done better. Definitely not ready for prime time!