General Info
Let Maaco Collision Repair & Auto Painting, turn the car you drive back into the car you love. As America’s #1 bodyshop, Maaco Collision Repair & Auto Painting are the experts in accident damage, dents, dings and faded paint repairing more than 20 million vehicles nationwide. Our expertly-trained technicians will make handling your insurance claims and accident repair easy by providing quality repairs you can trust with a nationwide warranty. We work with all automotive insurance companies to make the process easy, affordable and reliable from start to finish. We meet a strict repair standard at a value and quality other collision repair shops can’t provide. Call Maaco today to schedule your free estimate.
Hours
Regular Hours
Services/Products
Brands
Maaco
Payment method
all major credit cards
Amenities
Collision Services - We will assess the damaged area; recommending either repair or replacement of damaged parts and components, depending on what is the most cost effective for you. We will also repair areas where it is more cost effective to retain the original equipment; damage such as dents, dings, scratches and plastic and fiber glass repair. Insurance Claims - Depending on the amount of damage your car has and the cost of your deductible, you may save by paying out-of-pocket for repairs. If you're making a claim through your insurance company, you'll be happy to know that Maaco works with every major insurance carrier. We'll coordinate with the insurance companies involved, schedule an appointment for your car to be inspected, and even find you a rental car while we make your repairs. We use original manufacturer parts, factory specs, and precision assembly to expertly rebuild your car so it looks and drives like it did before the accident. Fleet & Industrial Services - Our clients benefit from a national footprint, corporate oversight, simple production model with faster turnaround, customized programs for special project needs, and a national warranty. Fleets of all sizes trust Maaco's reputation for craftsmanship, speed and economy. Maaco stands behind its work 100%, there are no management fees, and with centers coast-to-coast, there's always a Maaco facility close by.
Other Link 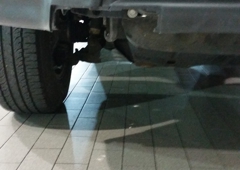 Went in to have a front bumper painted white to match my car and have it put on. Lakesha, the manager wrote the estimate and told me about a week they would call me. So I left the brand new bumper w/the production manager Jay. I asked him if the fit was ok, he pulled it out of box and said it was fine. After about a week and 1/2 I called them to follow up. Lakesha told me the bumper was bent and could I return it back where I bought it. I told her no, she then said they would heat it to make it fit. She said it would be fine. After about a week more, they never called me, so I called them&was able to bring my car to have bumper put on while I waited. After it was done, my bumper&the rest of my car were 2different color whites. After pointing this out to them, I was told, like it was no big deal "yeah, the colors are not going to match, if you want them to blend like 1 color, then there will be an additional charge for a different painting process. I was not told this in the very beginning. They got the job, then said, " oh you just told us to paint bumper, put it on and we did." WOW, a paint shop didn't think a paying customer would want their car to be all 1 color. Very disappointed in their communication skills in explaining this in the VERY BEGINING. I would have never wasted time or $$ w/them.

oh, almost forgot to mention that the bumper was not even aligned after they put it on my car. There's a gap on 1 side.

Horrifying. After 5 weeks of delays the vehicle was presented with the wrong ordered and installed parts. The frame was never inspected and the vehicle was unsafe to drive as we learned driving out of there. Parts were ordered that weren't broken or even on the vehicle.
The wrong model fender and bumper valance was installed.
Photos are after the repair all wrong parts used.

These People are GREAT!!!!!! Mr. D. and his team did a great job on my vehicle. I caouldn"t believe it. I picked up a brand new car. I have a 2000 Honda accord and the paint was peeling, I had dents in my car and scratches all over it. I could hardly recognize it. The manager was nice and very helpful when it came to helping me pick a paint service for my car. Very professional!! And it didn"t cost as much as i thought it would. If you need your vehicle painted this would definitly be the place!

I have been a customer at both the Charleston, and North Charleston stores. My family has been using them over the years without a problem, and always a great job done. We were in an accident recently, and they were able to save my deductable, and fix my car back to new. Deffenitly recommend them again!!

They have repaired and painted three cars for me, and did a good job for the money we paid. Friends told us to try maaco, and we were never sorry.

Fred and the guys were great. Had my car towed in, contacted my insurance company, and did a great job on repairs. This is my family's third car done by Maaco. Very happy.

My husband insisted to use Maaco since it was a national chain. I wish I hadn't listened to him! They did not fix everything that was supposed to be fixed. The paint job was not what I expected since we got the Ultimate (best you can get). The customer service here stinks & I would not go back here or recommend that you go here either.

Unfortunitly, we can cot contact this customer, nor verify her complaint, but would cirtainly be glad to correct any problems that were our responsibility should she contact us directly. We have been in business since 1982, and maintain a 93% customer satisfaction rating.

This listing has been claimed by a business representative.
Helpful(0)ShareFlag
mahogany29

I paid 2,000+ for my paint job due to a color change, and having the door seals, under the hood etc. painted as well. Needless to say when I went to pick up my car the inside was completely dirty, there were major flaws in the paint and the gloss wasn't as high quality as I paid for... I was told to bring it back in a few weeks to let the paint cure...

After taking it back about 3 weeks later to have it redone (which I had to get another 2 day rental) I was told it was ready on a Thurs. but decided to get it on Fri. esp since the rental was already paid for and to also give them more time for finishing touches... When I went to get the car the outside was dirty which Rob said it was from the wind (we had no rain the day before), I asked that they rewash it and I would return 4 hours later to get it... once again it was dirty, which pissed me off and made me decide to look over the entire car while looking over other cars on the lot with the lesser price paint jobs (which looked way better than mine)... I noticed that my door seals were messed up, they used double sided tape to put them back on which was the incorrect way, still the same flaws in the paint but now including buff swirls... My male friend who returned to me asked for the owner and requested they redo it as well as cover a rental while it was done...

Well the owner Fred said no they would not do a rental but will repaint it in one day... being skeptical I went to the other store (not knowing that Fred was the owner of that one too) to have them take a look at it and the guy wrote down all the flaws and asked me to swing by to see the owner the following week, I called ahead to see if he was there and he was somewhat rude in his tone and stated that they would have it done in one day... Once again I took my chance...

This time I picked up my car, the seals once again coming off which they glued them this time... I was so pissed about that that I really did not look the car over (Fred did agree to replace them, which they did) but once I went to get gas I looked over the car and noticed what looked like duck-tape but when I got a closer look it's the paint peeled over from the inside to the outside (which u can see b/c it's gray on red paint)... I'm so fed up with this company and wish that I would have went with a better company or checked how many times they have been to court prior...

I'm under warranty so my next step is to go to another Macco not owned by Fred to have them redo it and if they can't I guess I will be going to Fred again and if he does not want to do it, I guess I will have to use my attorney to go to small claims court... I never thought I would be shafted like this.

Go for the cheaper paint job that is there best work, go to the West Ashley for more expensive work you MAY get a better product.

****Long but wanted to let you know since I'm one to go on reviews and since there were none I figured the Co. didn't have major issues WRONG***

I'm sad that this customer had a bad experience at our shop, but glad to say that we corrected her problems. As hard as you try, sometimes things go wrong, but we try our hardiest to make our customers happy

This listing has been claimed by a business representative.
Helpful(0)ShareFlag
Auto Glass Only