Call us today - One call. One connection.

General Info
Our operators bring years of experience to Handyman Connection. Many have extensive backgrounds in construction, home repair, remodeling and other handyman services. Their goal is for Handyman Connection to provide its customers with excellent workmanship and superior customer service. When it comes to your home improvement projects our craftsmen have the expertise to get the job done and done right. Each one of our craftsmen has over ten years of experience and have all gone through a thorough background check. Handyman Connection of Charleston's team of professionals is passionate about taking your home improvement dreams and making them a reality.
BBB Rating
A+
BBB Rating and Accreditation information may be delayed up to a week.
BBB Accredited businesses follow the BBB Code of Business Practices and pay a fee for accreditation review and monitoring. Accreditation is not a BBB endorsement or evaluation of the business’ product quality or competency in performing services.

Associations
Member of the Better Business Bureau A+ Rating
Other Link 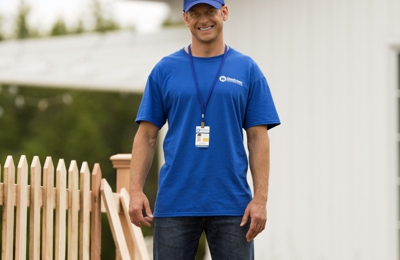 Based on my first experience with Handyman connection installing my attic stairs, I would've rated them 5 stars. Because the handyman did a great job, I contacted them again when I had an issue with my water heater leaking. I contacted Handyman Connection via their website and told them my water heater was leaking & that I wanted an estimate to get it repaired. I was contacted in a timely manner and set up an appointment. The handyman came to inspect the water heater the same day. I showed him the water spot in my ceiling that cued me to the leak. He went into the attic & advised me that my water heater wasn't leaking. I asked him what else could it be b/c I was under the impression the water heater was the only water source in the attic. He advised it was possibly my AC leaking (both my water heater & AC ducts were in my attic) and he recommended I contact an AC technician, which I did. The AC technician was able to come later that day (with a $40 service call fee). He advised me it was highly unlikely my AC was leaking because it was winter & I wasn't using the AC. I advised him I had already had my water heater checked by a (supposedly) reliable handyman and was told my water heater wasn't leaking. The AC technician went into the attic, checked my AC unit & confirmed it wasn't leaking. I showed him the water spot in my bathroom ceiling and he went back in the attic for less than 2 minutes and came back downstairs only to tell me my water heater WAS leaking & he had taken pictures for me to see. I still had to pay him the $40 service call fee because that is what I agreed to even though there was nothing wrong with my AC. I contacted Handyman Connection via email & let them know the handyman had given incorrect information about the water heater not leaking. I asked that a different handyman be sent out to repair the water heater and respectfully asked that the $40 I paid the AC guy (unnecessarily) be taken off the cost of repair. The owner & I emailed back & forth and he eventually called to tell me that I needed to contact a plumbing company to repair my water heater because his company doesn't do that type of work. However, the website clearly lists water heater repair/replacement as a service they offer. He then proceeds to tell me that "As far as the $40 is concerned, I don't think that's a bad price to pay because you at least know what's wrong now." I was livid because I told them in my iniitial request for service what was wrong. If they didn't do that kind of work, they should've never wasted my time in sending out a technician to give me an estimate to repair it. Needless to say, I am one repeat customer that will NEVER use this company again. I can live with a handyman making a mistake, but the owner took no ownership whatsoever, which I can't accept. I am now left to pay for the repair (which I should definitely pay for), but I also am out the $40 due to a misdiagnosis by Handyman Connection.

We had crown molding installed throughout the house and the workmanship was excellent as was the craftsman himself and the customer service, and all with a fair price! We would definitely use again!

Called them out to help with a number of projects around the house. Very happy with the response time and service.

I had them do some sheet rock repair and painting. Fair price and quality work. Showed up on time. Will use again.

I had such a long list of numerous types of projects and repairs, I thought it would take forever to call a plumber, then an electrician, carpenter, painter, etc. This company was able to handle every item on my list and saved me a lot of time and money. They were at my home when promised, the handymen were knowledgeable and friendly, and the customer service was excellent. I will not l;hesitate to call the Handyman Connection any time in the future for all my home repairs and projects.

I made an appointment a week and a half in advance and confirmed it the day before; on day of service I was contacted 2 hours after the time a technician was suppose to be here to tell me that they were unable to keep the scheduled appointment. The individual who contacted me presented no solution; this company is 100% unreliable. I would suggest never using this company and contacting another handyman service.

Handyman Connection is your single solution for that list of home improvements that seem to grow longer every day. We're here to help you with our dependable and skilled craftsmen, great customer service, and first class workmanship. Whether you need something installed, built, repaired or maintained, just look to Handyman Connection. One call or click and we'll assign a craftsman to come to your home for your specific need.