General Info
The health and safety of our patients, visitors, employees, and our communities remain a top priority at NewYork-Presbyterian. In response to the evolving COVID-19 outbreak and in line with our revised General Visitation Guidelines, we are keeping select entrances open at each Hospital throughout the enterprise. All other entrances will be closed and inaccessible to patients, visitors, and staff. The following entrances will remain open for patients, visitors, and employees: Adult Emergency Department Broadway, Herbert Irving, Milstein Main and Eye Institute Entrances
Hours
Regular Hours
Payment method
amex, discover, all major credit cards
Location
New York-Presbyterian/Columbia
Neighborhoods
Upper Manhattan, Washington Heights
Category
Hospitals 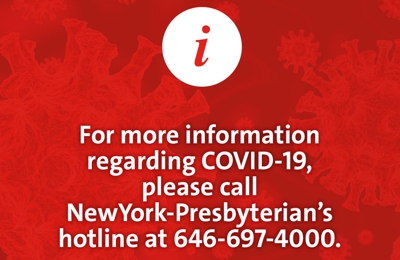 This is the most despicable excuse for a healthcare facility that I have ever seen! Their "reputation" is nothing but a self-blown smokescreen. There is nothing exceptional about this place except for its lack of professionalism or any sense of the patient portion of patient-centered care. Not only are they uncaring, they are also unsanitary, unethical, and have blatant disregard for healthcare standards.

The ICU was one of the worst parts of the ordeal. As my mother laid there on full life support, the apathetic oncologist Dr. Amengual entered the room and asked me if I had heard the results of the biopsy sent to the NIH. I told her I had read the report and that it didn't say what she was stating. She cut the conversation short and said that she had gone to the ethics board and they had granted them permission to give her chemotherapy against my wishes. At that point I demanded to speak to patient relations. After speaking with them I was told that in fact the ethics board had made the decision without hearing both sides of the argument and that if I didn't want her started on it asap I had to speak to the director of the ethics board that day. I spoke to a Dr. Prager who heads the board and is one of the most pompous, disgraceful, unethical excuses for a doctor I have ever seen. I told him my concerns about the diagnosis, how the treatment they were proposing was not even correct if their diagnosis was accurate, and about the horrible care she had already received. To sum it up, his response was "We don't uphold the decision of a surrogate when it is based on an irrational belief, and your belief that the doctors are wrong is irrational." Absolutely upsurd!!!! I refused all treatments related the lymphoma diagnosis and let her continue on the IV antibiotics she was now receiving given septic shock. I was told by Dr. Prager that my mother needed to be placed in hospice and that they would not send her to rehab as there was basically no hope for her, just bedbound and dying. I refused and stated that that was ridiculous. Contrary to what I was told by the Doctor Gods of Columbia, my mom is now happily living in an assisted living facility walking independently, taking care of her own toileting, bathing, dressing, etc, and is only receiving the most minimal assistance - medication management. Never, NEVER trust Columbia Presbyterian!

Worse hospital I ever went to. The emergency room is a disgrace. I just found my blood work from 2010 and was never told I was diabetic and to get treatment. Went to the hospital in April 2014 and was refused proper care. In May 2014 saw a physician for diabetes and never contacted me when my sugar was 531. I could have died. Worse hospital and ER.

It hurts me till this day and now I would like to air out what I feel, from about my early, early twenties or younger I was seen by a doctor in this hospital Columbia Presbyterian Endo dept. I was told to take Dexamethozone which I gain so much weight and all my doctor said was to go on a diet, being I was young I had no idea I was having side effects from this med , the doctor should have known this. He freakin tried to kill me untill I took my case away from him and brought to Dr. Kelly who said he was suppose to give me water pills along with this med. I hate that doctor til this day, I still have water in my system. He was a prejudice M---F. His secretary said to my mom we dont take medicade when they knew my mom worked for this hospital. Thanks Columbia for having a quak for a doctor he should be dead by now he was old then, cause I am in my 50's this always bothered me, to have this water retention since then Thank you for ruining my life. To have someone working for you who was not educated enough to know what dexamethozone side effects where he shouold had never been working there.Thanks for this pain I carried all these years. Every day I will write if I can how I feel till I am tired, I wake up in the moring my feet are like Fred Flinstone feet before it was just the legs . I would try to lose weight to just get it back again in water what is the Fin sense. This ruined my self confidence in myself. I hate that doctor and his nasty secretary.

The phone number listed is for the Emergenccy Room. Should display the General Information phone number 212-305-2500 which directs the user to the appropriate area.