Because when it's time to move, True Friends are always there for you"

General Info
Your Premier Movers offering 1st Class Service! For years, our movers have supported this area with extraordinary moving services. We offer local, long distance, commercial, auto transporters and corporate moves for our clients. Call us today at (855)-668-3615 and speak with one of our certified moving consultants. Our trained team members will quote you the best local moving rate possible.Our moving company is family-owned and operated and our clients sense that family-friendly care with every move. We treat your items as our own. Time and money are crucial parts to any move, and our local movers will devise a move plan that maximizes your time and money. We are industry leaders, and it shows in our skill and service. We appreciate our customers with a dedication to total customer satisfaction in every move. True Friends Moving provides personal attention and care to each client by every team member that sets us apart as a service company. Each highly skilled mover is considerate of every customer, and values their possessions. Our movers are passionate about accomplishing your move with excellence. We can handle your corporate, commercial or residential move. Moving is what we do. Leave your moving to us and experience the best there is in hassle-free moving!
Business History
True Friends Moving Company was founded by Chris Knowles after finding himself at a crossroads between wanting to start his own business or continue climbing the corporate ladder at a Fortune 500 company which he had done for many years. After much soul searching he realized that building his own company and brand was more of a passion of his then someone else's and the rest is history. With his hard work and a commitment to quality but affordable relocation services; True Friends was born. Starting out with just a couple movers and a moving truck; we have built a foundation that begins with providing customer service that is second to none. Since then True Friends is still as dedicated to upholding the standards that make us THE MOVERS, which you can trust for all your apartment, office or residential moving needs. True Friends Moving has been dedicated ever since to becoming one of the top moving companies of the South East as we have now grown from middle TN thru to Florida
BBB Rating
A+
BBB Rating and Accreditation information may be delayed up to a week.
BBB Accredited businesses follow the BBB Code of Business Practices and pay a fee for accreditation review and monitoring. Accreditation is not a BBB endorsement or evaluation of the business’ product quality or competency in performing services. 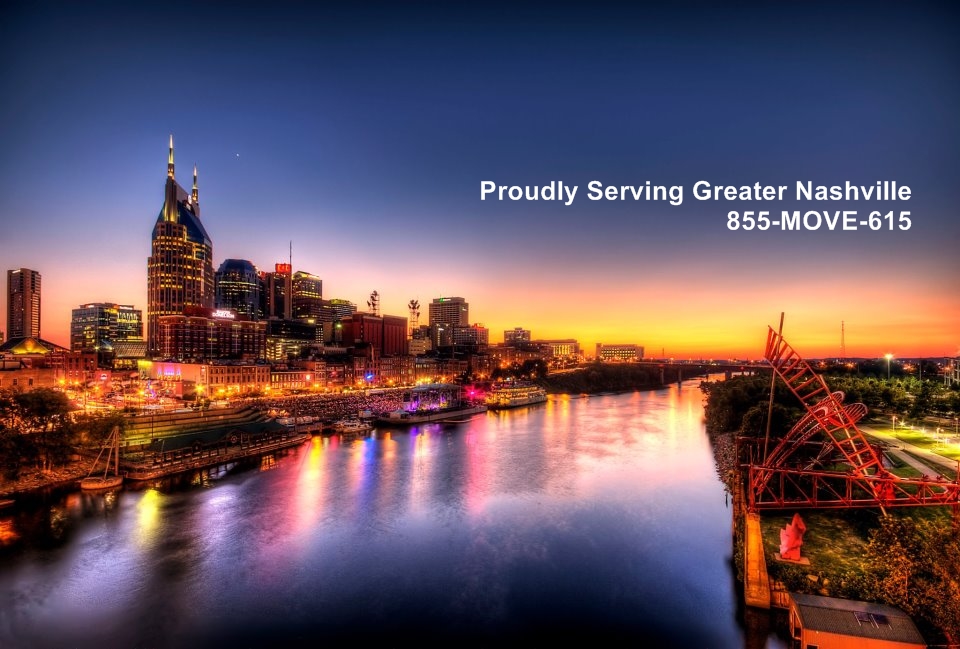 Services/Products
855-MOVE-615 Full Service Residential and Commercial Local and Long Distance Moving serving All of Greater Nashville and beyond. Moving to a new home or office can be an exciting new chapter in life but can also be stressful, emotional and VERY time consuming. Whether you are buying your first place, downsizing, or just making another stop along your journey, True Friends will get you there STRESS-FREE. We provide fast, friendly and affordable service to take the stress out of moving day. Integrity and commitment to customer service is vital to our Reputation in the community. Our Nashville Tn rates include 2 or 3 men crews and we provide our own moving trucks with all proper moving equipment. Get Low Nashville Moving Rates with the best in town! Book today and see why were the Best Movers in Tennessee. We have a strong reputation behind us, The leader in short notice moving services! Get High Quality Service & 100% Customer Satisfaction guarantee!
Payment method
discover, mastercard, visa, cash, all major credit cards, insurance, check, debit
Location
3606 Old Hickory Blvd Nashville TN 37138 Proudly serving All of Greater Nashville including Hendersonville moving, Hermitage moving, Gallatin moving, Antioch moving, Brentwood moving, Mt Juliet Moving, Donelson moving, Madison moving, Old Hickory movi
Amenities
Free Padding and Shrink-wrapping, Free No-Obligation Estimates, Free Floor Protection, Free Dis-assembly and Reassembly of Furniture with All Moves, Free Disconnection and Re-connection of Appliances (Gas Excluded) Free Removal of Unwanted but usable Household ItemsNo Stair Charges with All MovesFriendly, Experienced Staff, Flat hourly rates so there's No Surprises On Time Pickup and DeliveryFully Licensed and Insured
Accreditation 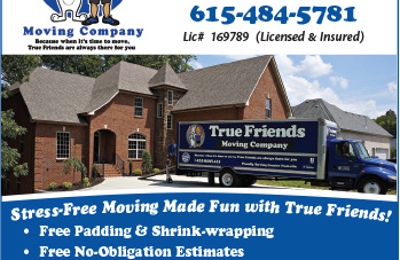 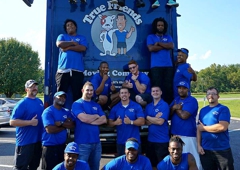 True Friends Moving Company recently helped me with some moving work, and they were great! They were very hard working, and very careful with everything. They showed up on time, and overall, they were extremely professional. Most importantly, they listened well. They were careful to do what I asked them to do, and wonderful about asking where various pieces of furniture were supposed to go. They were efficient and fast, and I was very pleased with their services! This is a great moving company, and I highly recommend them!

I had an atypical and difficult moving job. I needed to move a very heavy upright piano about 50 feet from one room in my home to another. So, I called True Friends Moving Company. I dealt with Chris over the phone, and it was Jerry and Mike who came out to do the moving. All three were fantastic! This was a difficult job, and there were tight corners, and they tried several different ways to move it. Frankly, if they had said at that point that it simply was not possible to do what I wanted to do, I would have believed them, because I was there and I saw the difficulty first hand. But they kept at it and they finally found a way to accomplish the move. I can not say enough good things about the way they stuck with it. They went above and beyond for me. They are great guys and I would highly recommend them to everyone!

This was a local move for me and I hired True Friends Moving Company. I have moved a lot and used several moving companies and always ended up with something broken. For this move, there was nothing broken. The two movers that arrived called ahead to let me know they were on their way. They were very strong and took great care with my furniture and the furniture is very heavy! Nothing was damaged at all. The two movers worked well together and got the job done in the best way! I appreciate them and I would certainly use them again.

Mike and the whole crew over at True Friends Moving Company did an excellent job moving me! They were friendly, professional, and hard-working! They were careful with everything, and overall, I would have to just say they were fantastic! I would highly recommend them to everyone!

Quick, but very careful! The movers at True Friends Moving Company are really hard-working! I thought it would take them a lot longer to get me moved out and then moved in, but it didn't! They were quick, but they were also very careful and professional. I mean, there was not the first scratch on anything. They were friendly people, and overall, the whole company was very easy to do business with! They did a good job for me and I highly recommend them! I think they went above and beyond for me!

Very Nice! Extremely Accommodating & Helpful My experience with True Friends Moving Company was very good. There were two young men who brought the furniture in for me and they really did a good job! I asked them if they would put my bed up for me and they happily did just that! They never complained one time about doing that for me. I am a senior citizen and they were extremely helpful to me. Everything turned out just fine for me and I highly recommend their services, especially those two young men who were so nice to me!

Very accommodating and they went above and beyond for us! I was extremely impressed with True Friends Moving Company. They were very hard-working people, and they were very careful with our belongings. But beyond that, they were just plain nice. Circumstances occurred which caused us to have to change our moving date seven times. They were totally accommodating and patient with us, and they arranged it so that we did not lose our security deposit with them. That was so kind of them, and you could not have asked for an easier company to work with. We were completely happy with them, and we highly recommend them! They are great people who really went above and beyond for us!

Never Stopped Until The Job Was Done. True Friends Moving Company was absolutely awesome! We had a lot of stuff to move and those guys knocked it out in six hours! They did a great job and hustled from the time they arrived and never stopped until they were finished. Now I have used moving companies before but True Friends Moving Company outworked, out serviced, and just outdid them with their great work ethic! Absolutely recommendable!

Thanks so much for being persistent in selling me on your company. Make sure you keep those two guys on your staff as they were great and I can't say enough nice things,Thanks again

Fast, friendly, efficient, skilled, knowledgeable, fair. We were pleased with their service and thankful they could accomplish moving everything we needed moved, including several difficult pieces from upstairs. Would use again, no question.

I was very pleased with my movers today. Montrell and Adrian did a good job! They arrived on time and were very quick. Nice too!

Both my movers were very personable and I enjoyed working with them. I thought they did a great job with my move

Guys were great. Very professional. I would like the same 2 guys to move my furniture back in the house when remodel is complete.

Excellent, above and beyond... very polite and accommodating. And professional. Should be more like them.. 10 stars ⭐️ Thankyou

Nathan and Adrian knocked out our move as if it were a military operation. Super fast and very professional. Moving ducks, they helped us make our move an actual pleasurable experience. Thanks guys and thanks to True friends moving.

I just want to thank you and the company for excellent service this past Saturday for my move from Goodlettsville to Gallatin. Everything was so well done, from arrival to completion, and I felt Carl and Shaquille went the extra mile in service! They were both professional, yet so easy to work with, friendly and courteous. I have and will continue to recommend True Friends Moving in the future

I made a great choice by hiring this company and thankful for the awesome team that you guys sent out. Moving from the 3rd floor is never fun but Matt and Justin made light work of it and kept a positive attitude the entire time. Big thanks

Thier trucks park across the street from where i live.ill not ever use them to help me move.whenever i do get to.a good friend of mine was doing me a big favor last summer.we had to stop at the post office.thier drivers blkd the exit.kept motioning us to back up.making us go out the exit.we coulda got in a collision comin out the entrance.as soon.s we did that.out they came.that was so rude.ill never use them to move