"Specializing in reuniting lovers and solving all problems."

General Info
My name is Anna, and I can help you get in touch with your Inner Self. Join me for this special experience and let a reading tell your future! Over the years I have been able to sharpen and tune in with my psychic power. I feel very lucky and fortunate to be able to help people find their way through life. Life is hard sometimes and I have dedicated myself to being there and offering guidance and assistance. I am able to tap into my clients situation and speak to their spirit guides directly, therefore my psychic abilities have no limitations, meaning, there is no problem I cannot help you overcome, and there is no realm that I cannot enter. Over the past 45 years I have specialized in helping lovers reunite, and helping others find love using my proven love spells. You can reach out to me 24 hours a day!! I so look forward to talking with you and helping you improve your life. Halloween Holiday Special: 75% off all psychic services. Call for details. Expires 11/5/2019 Halloween Psychic Special: Receive a free psychic reading with the purchase of any psychic service. Call for details. Expires 11/5/2019
Services/Products
Psychic Readings Tarot Card Readings Life History Readings Spiritual Cleansing Root Cleansing Love Spells Reuniting Lovers Spells Mending Marriages Commitment Spell Stopping Cheaters Money Spells Sex Spells Additional Removal Bad Spirit Removal Pet Readings
Payment method
amex, discover, master card, visa
Location
Nationwide
Amenities
Now accepting PayPal!
Other Link 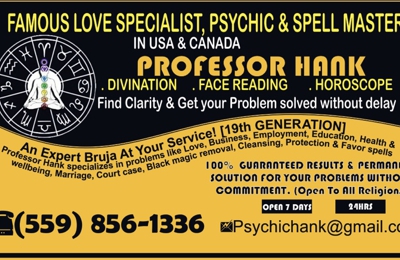 A great teacher and healer with great insight. My session with Anna was very helpful, informing and just wonderful, A very calming and healing experience. Thank you Anna! Will see you again when I return to Chicago.❤️
#Expert#Good Facility#Very Professional

Anna is a very special lady. I felt an instant connection with her the minute we met when I was in Orlando. This experience was extremely helpful for me. I have had a lot weighting me down for a very long time. I never met or knew who my biological father was. My mom passed away in 2016 taking all the unanswered questions with her. I had a tarot reading and was told to find a Medium that I connected with and that my mom would have answers for me. She did in deed answer my life long questions and now I can move forward in my life, removing blockage and begin healing. Anna is so amazing that I signed up to take some classes from her as well. I am excited to begin my journey with Anna by my side.😍#Expert#Good Facility#Very Professional

Hello to every one reading this testimony. I engaged to my fiancé for 2 years, one day he told me was moving out and he literally ended the relationship of 6 good years i was left absolutely heartbroken and hopeless because he left me for someone else.
So as usual I told my best friend about it and she started telling me about a psychic who’s name is Michael, because the way he left me was so mysterious and I didn’t believe in things like that but I decided to give it a try.
So I started chatting with him and explain to him all that happened he did some readings and told me the lady my fiancé left me for actually cast a spell on him.
He told me he was going to help me and after 3 days of using what he sent to me and some chants that I would see changes and eventually I have my man back. I believed him and that was the best decision I ever made.
This man has the power to cast spells, bring back your lovers, After seeing the wonders he performed, I told him I was too broke to take care of the kids and my husband, He gave me a soap for money and mercies, Just seven days after getting the soap, I got promoted at work and people started helping me with money I never asked for, I never expected such blessing in a short period I’ll forever be grateful to you Great Michael.

my mind was blown by the fast result i got from Dr Maway .( https://www.drmawaylovespell.com )
i was skeptical and wonder if i would get to see my boyfriend back after he left me and started posting a particular lady on his profile. As though the universe could hear my cries. everything
Dr maway did for me start to manifest. My boyfriend is back, and my brother is no longer troubled by the gang chasing after him.
this things came easy to me because Dr maway did a great job from his temple.

She is an angel! I have known her since 2015 when we lived in the same neighborhood in Miami. I can say this with full confidence#Expert#Good Facility#Very Professional

Thank you for your powerful love spell

If you’re looking for a great card reading