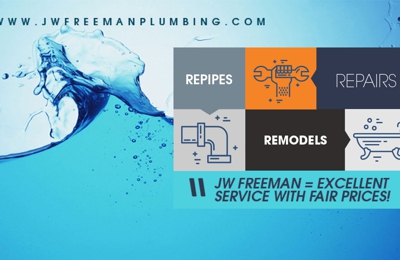 I called JW Freeman out to snake out my pipes and they did a great job, were really nice and a blessing. Thankyou

The J.W. Freeman Plumbing crew was very friendly and did the job perfectly! I had contacted a few plumbers before choosing them and am very happy with my decision. The plumbers that came out to fix my leaking faucet in the bathroom were responsive, easy people to talk to and cleaned up after themselves, which I value a lot. I highly recommend this plumbing company to anyone looking to get their faucet or another plumbing fixture fixed.

Called them first thing in the morning after finding a leak on my side of the water meter the night before. The receptionist understood what was wrong, and said she would have someone out in an hour, and she did. I was floored and thrilled. She sent a competent, very nice, young man that was very good at his job. He explained what he found, showed me the broken pipe and repaired it in a timely manner. I also thought the cost was very reasonable...will definitely use again!

My toilet was rocking for a long time my husband tried fixing it but the seals kept breaking so finally when the toilet started leaking water from the bottom I knew it was time to call a plumber. I called several and read reviews every other plumber I called was not very helpful over the phone and all acted too busy and not available right away. After calling 4 other places I called JW Freeman, even though he was in the middle of another service called he assured me that he would come help me as soon as he was done. Shortly after he called me back and was on his way right over. I really appreciated how fast he was! He is a very tall man who worked in my tiny bathroom. ;) He was very nice and did an excellent job! My toilet is totally secure now, it's been several months and it is solid and secure! It was a messy job and he had to do some hard work so I thought it was going to be expensive but it wasn't at all, his price was very reasonable and fair. I will always call him from now on with any plumbing problems. My shower needs some repair soon so I'm glad I know who I can trust to do the job. Don't bother with anyone else, JW Freeman is the way to go!