Because We Care...We're Always There! 100% Satisfaction Guaranteed!!!

Because We Care...We're Always There! 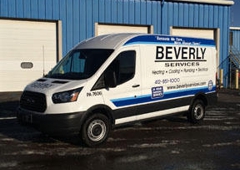 Use them for over 30 years and now they have turned into a bait and switch company. Do not trust anything they say over the phone!! We made the mistake and were overcharged by 67%! Save yourself the pain and go elsewhere.

I put in a claim late Friday evening with my home warranty service because there was gas leak at one of my rentals, and they assigned my claim to Beverly Services. The gas company came out, shut off the gas supply, and red tagged the issue because one of their employees made a monumental mistake and cut the supply line to short when replacing the meter (without my consent and my tenant's knowledge) earlier that day.

Since it was about 30 degrees, I called Beverly Services shortly after I filed the home warranty claim late Friday evening/early Saturday morning to arrange service for the next day so that my tenants wouldn't have to spend more than one day taking an ice cold shower and night in a freezing house. I called Beverly Services emergency number, and the representative arranged for someone to call my tenants around 7 a.m. on Saturday and set up a service visit - or so I thought. Apparently, a technician called my tenant around 8 a.m. and said he wouldn't be able to get a backhoe out there this weekend to take care of the problem. My tenant, who works in oil and gas, explained no backhoe would be needed as the distance from the curb box to the meter was merely 15-20 feet, so they should be able to manually dig at each end and run the replacement pipe through with little issue. The technician said he doubted that, but refused to come out to the house and do an assessment for himself.

After my tenant relayed that information to me, I immediately called Beverly Services and explained that the technician not only failed to show up for the service visit, he refused. The representative then told me she would have the service manager call me. Well, the service manager called my tenant, and said he would give my tenant an estimate over the phone. Obviously, my tenant told him the technician never assessed the issue, so he didn't see how the manager could provide him with an accurate estimate, and then my tenant requested that the manager send someone or come out himself to do an assessment. Like his technician, the manager refused to come out and restated he would give him the estimate over the phone and my tenant could decide if he was willing to pay that much money before they came out and rendered service. My tenant obviously declined.

Thankfully, I found another DOT certified plumber who is local to the area and understands the meaning of customer service, and he came out that afternoon; dug up the line at the curb box and meter and replaced it (just like my tenant thought); called up one of the Gas company supervisors to come inspect it; and had the gas turned back on by 8 p.m. - all within a five hour timeframe and without charging me out the @$$ like Beverly Services probably would have for an "emergency" job. In a way, Beverly refusing to render service is the best thing that could have happened because I found my go-to guy when it comes to plumbing-related issues! However, I will never recommend Beverly Services to anyone, and I plan on providing the same feedback to my home warranty provider.

Had water heater installed. Work was done quickly and done well. Technicians were courteous and knowledgeable. Be prepared to pay top dollar.

I'm on the fence about this company. My first experience (for a plumbing issue) was positive, but my second (for a heating-related problem) was a nightmare. The man was rude, uninformative, lazy, condescending, and incompetent. He left things in a worse state than they were before he arrived.

Beverly Services came to check out a plumbing problem that was resulting in water leakage in our garage. The technician, who was very nice, gave us a quote that seemed quite high to fix the problem, so we decided to explore our options, since the leak was minor. However, while he was there, he had removed a cement seal on a sewage pipe in order to diagnose the problem. (This was done with a hammer and chisel, destroying the seal, so it could not be replaced). We realized later in the day that this resulted in a considerable amount of raw sewage backing up all over our garage floor every time we used the kitchen or bathroom.

When we called late in the afternoon (as soon as we discovered the problem) to say it needed to be fixed, Beverly Services told us they wouldn't send someone out until the next day. I reiterated the urgency of the problem, and after a great deal of insistence on my part, they agreed to send someone out that night to try to temporarily fix the problem. Then the individual I was speaking to from the service department informed me that we would be charged for the visit.

Beverly Services repeatedly refused to take responsibility for their actions, claiming that they did not create the problem, even though the problem was minor before they came and very major after they broke the seal. They said the seal could not be fixed and we would have to get all the work done as they had quoted it, at about $2,000. I insisted they replace the seal without a charge. We went back and forth for several minutes on this point, with the service person insisting that we would have to pay for a visit, even though we had already paid them $60, and all they had done was break a seal and cause a major sewage backup in our garage. After a great deal of arguing, the company finally agreed to send someone that evening at no charge, "as a courtesy." (Not because they broke it in the first place.)

We called back a few moments later to see when he would be coming (because we needed to make a plan for the evening, since we could not use our bathroom or kitchen). We were told someone would call us back, but no one ever did. The technician arrived about 2 hours after the end of the phone call, which is perfectly reasonable, but in the meantime, we were left wondering, since no one from the company called us back.

Again, the technician was very nice. And he placed a temporary fix on the pipe (we haven't tested it yet).

After the technician left, we got message from the company claiming that they had "been trying to get in touch with" us, but they "kept getting voicemail." A quick inspection of the phone showed that we had no missed calls and no messages.

The technician seemed professional, but this company's policies for how it treats its customers are anything but. Attempting to charge a customer for a problem that the company has caused is clearly unacceptable, and a long and unpleasant phone conversation should not be necessary to stop that from happening.

This is the only company that I will let into my home. Yes, I am that picky! Their people are the best! They even wear booties so they don't track dirt on my floors. I have used them for many things including some motion sensor floodlights in my yard and a new waterheater. I called around and their pricing is also very reasonable.

When my drain is clogged I call Beverly. When my heating and a/c unit needs work ,I call Beverly. Electrical issues, Beverly. I can't say enough good about them. all their people are especially nice. I have used them for quite some time and have always been satisfied.

I've been using Beverly Services for over 12 years! I can't say enough about their people. They are awesome!! Every technician that ever came to my home was great! They quote a price before repairing your equipment and they are very reasonable! A+++!!!!

I will only call Beverly Services from this point on! I called Beverly Services when my furnace quit working on a Friday night and not only was the technician (Brandon) courteous and knowledgeable but he was at my house within 1 hour of when I called. The technician explained the problem, showed me that the heat exchanger was cracked in several places and he had a new furnace ready to install the next morning which was a Saturday. I called several other HVAC companies and none of them could come near to the price I paid for a new furnace installed. Everyone at Beverly including the dispatch team, Brandon and the installation crew couldn't have been nicer. Thank you Beverly Services!!

I've used Beverly for years, never had a problem. Their repairmen are always very courteous and their prices are very reasonable. I got a new furnace from them recently the installers left my home cleaner than it was before they arrived! Also, I did check around before I bought, and their price was the lowest of four quotes! A+++

Our family has been using Beverly Services for many years. They installed a new furnace and air conditioner for both myself and my parents. The installers were very informative and professional. When our old unit shut down and we had no heat Beverly's service department responded immediately. We are very happy and satisfied with Beverly and would recommend their services to anyone.

I did check with the Attorney General and Beverly has an immpecable reputation. Be wary of other companies trying to destroy good company's reputations.

I cannot stress enough how terrible this company is. If you are even considering these guys please check the Attorney Generals office first and you will realize the massive amount of complaints against them. They plat extreme hardball if you even try to question there pricing or work. Their rates are much higher than other plumbers and their workmanship is very low quality! TOTAL SCAM ARTISTS!! STAY AWAY FROM THIS COMPANY AT ALL COSTS

As President of Beverly Services I find a review such as this one without merit. At Beverly we have been in business since 1942, we have an A+ rating with the Better Business Bureau, we have 100%Satisfaction Guarantee, and we do not have any legal suits nor we have any mass claims filed against us with the Attorney General. If you do ever have any problems with our services please call me directly and I will be happy resolve them.

This listing has been claimed by a business representative.
Helpful(0)ShareFlag
michael03

I have been a customer of Beverly Services for many years. They have the best technicians around. Beverly has replaced my old inefficient furnace and a/c with a HybridHeat system. What a savings! With the price of natural gas being so high I can now choose to heat with either electric or gas. They also replaced my hot water tank, and a toilet on my first floor. Very professional and affordable!