Central Jersey's Premier Residential & Commercial Drain Cleaners. If You Have A Clog, Call Us First!

General Info
Done Right Drain Cleaning gives you an affordable way to fix any clog. Being centrally located in New Jersey, we offer excellent and timely service, so call us for fast, professional, affordable drain cleaning. Our professional technicians are experts at diagnosing and resolving any drain clog or stoppage. Same Day Emergency Repairs are never a problem for Done Right Drain Cleaning and once we arrive, our professional technicians have the experience and tools to get your drains flowing again in a hurry. We've been cleaning drains for over 15 years. From kitchen sinks to mainline sewer stoppages, we've seen it all. Using some of the newest technology from underground cameras to trenchless sewer repair, we keep up to date. We operate 7 days and week around the clock, so give us a call, and we will be there to help!
Hours
Regular Hours
Services/Products
* Clog Removal & Drain Cleaning* Sewer Stoppages / Sewer Cleaning* Water Jetting / Hydro-Jetting* Camera inspections* Trenchless sewer line repair* Clogged toilet repair* Rooter service* Outside Drains / Storm Drains* Lavatory Sink Stoppage* Laundry Lines Stoppage* Sump Pump and Sewer Injectors* Commercial Drain Cleaning Maintenance Plans* Flat Rate Pricing: We charge by the job, not by the hour* 24/7 Emergency Drain Service Available
Payment method
mastercard, amex, check, debit, discover, visa
Other Link 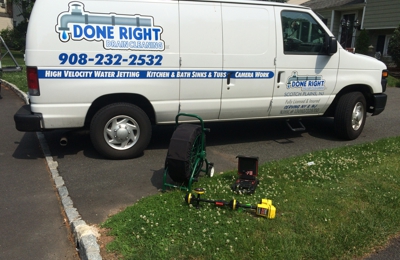 Scott arrived at the time promised and got right to work on my clogged kitchen sink. He found that the 70-year old pipes were almost closed with gunk, so he replaced the bad part. He then made the bathroom sink clear again. He did a professional job; he knew what he was doing. The prices were reasonable because now the sinks drain again!

Scott was there to save the day! Arrived on time and in 15 minutes had the tub and sink drains cleared. Reasonable prices as well. Next time I have a drain problem, I know who to call.

Scott was our hero on March 16, 2016. The sewer backed up late on March 14, and an AJ Perri plumber was unable to clear the clog. AJ Perri came out March 15 with a camera and reported that we had a collapsed pipe under the street and the cost would be $15,000! After a stressful day of calling contractors, the city, and insurance companies, I decided to get a second opinion. After a referral from a professional contractor I called Done Right Drain Cleaning in Scotch Plains on March 16. He was here within an hour and using much better equipment than AJ Perri used, he quickly cleared the clog and using the camera, proved there wasn't a collapsed pipe. Two days later, and our sewer drain is still clear.
Scott was a friendly, helpful professional and I will call him for our next plumbing project.

Highly recommend Done Right. Prompt service and very knowledgeable. Would definitely use them again should the need arise.

Prompt friendly service. Best prices around. Scott explains as he goes and gives tips on maintenance

All the reviews are right on point. Scott arrived on time did a great job at a reasonable price. He cleaned and took his time to explain what was the cause and how to prevent it. Thank you

We had water backing up from the drain in our downstairs shower over the weekend. We attempted to snake the drain, but we determined it was most likely a sewer line clog and didn't have the equipment to do it ourselves. I called Scott at 8:25 in the morning, and he was over in 45 minutes. He was able to clear the blockage very quickly and we're no longer having any issues with backups. I highly recommend Done Right Drain Cleaning. Thanks again, Scott!

Over the weekend, we had an emergency situation with water backing into the house from the toilets and the sinks due sewer line problems. With twins and a screaming wife, I called up a couple of plumbing & sewer companies in the area and was told that my appointment would be in the work queue because it was over the weekend. I went online to YP.com and found “Done Right Drain Cleaning”. I spoke to Scott over the phone and explained the situation and needed some help right away. Based on the situation, Scott put me at ease by assuring me that he would be able to help the same day. After a short diagnosis of the pipes and the sewer line of my home, he had special equipment to clean out the root of the clog at very competitive price. Most of all, I wanted to thank Scott for his honesty and not trying to upsell me. I would highly recommend Scott for plumbing & sewer issues…

I recently had a sewer line stoppage. Couldn't use any water in the home at all. I called a two plumbing companies to come out and fix my problem. One never returned my call and the other showed up and cabled my line with no success. He proceeded to tell me that my only course of action was to excavate my line. A job that would roughly cost $10,500. With a three month old baby and the only income coming from me it was a job I clearly could not afford. I decided to get a second opinion. I found and called Done Right Drain Cleaning. Within a hour Scott was at my door. I explained the situation and what had transpired with the company before. He inspected my sewer line with a camera and spoke to me about doing a Jet. I agreed and I'm glad I did. He was able to completely cleared my line of the roots clogging it saving me from spending 10,500 dollars! My wife and I could not have been more happy. Which is why I am more than happy to write this review and advise anyone reading this to call Done Right for your drain cleaning needs. And Scott, if you are reading this, thanks again for your hard work and honesty!!!

Last Summer my wife accidentally let her wedding ring go down the drain. Literally. We called Scott and he came! It was a Sunday morning and the two other companies we called said that they could get there but not until Monday or Tuesday. Scott came and 10 minutes later my wife had her ring back. Unbelievable! Last night, my son noticed water coming out of one of the basement pipes. We called Scott, he was busy working but promised us that he would come the same day. And sure enough he did come. The main line was clogged (FYI, don't fush 'flushable wipes"). Scott explained what likely had happened and what he needed to do. He gave us a fair price and a 6 month guarantee. He cleaned the line and took care of the leak. So far no problems. I can recommend Done Right Drain Cleaning without hesitation.

Scott was great! He saved me on more then one occasion. The first time my main drain backed up on a Saturday night and Scott was right there to help at a reasonable rate when no other company would come out. My wife and I just bought a new home and we found out that our sink was backed up, turns out it was our main line from the last owners throwing grease in the sink. Scott came out and showed us everything that was wrong in basic terms so that we would understand everything and charged us a reasonable rate. Will recommend him 1000x! Hopefully we won't need him again, but if we do, our trust is with him. Thanks Scott!!!!