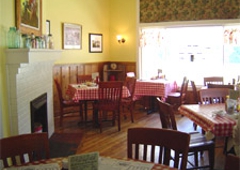 Authentic Southern Dining in a relaxed red checked tablecloth atmosphere, has made this a Nashville Favorite for over 50 years. Located on Highway 100 at the Northern terminus of the Natchez Trace Parkway, the Loveless is opened for breakfast, lunch, and dinner 7 days a week and will serve an it's award winning breakfast anytime. Nationally acclaimed and featured in numerous articles and segments from CBS, People Magazine, Southern Living to In Style and Vogue, the Loveless is a not to be missed when visiting Music City. Credit Cards and reservations accepted. 615-646-9700.

My first time to Loveless for breakfast this weekend was fabulous! The food was delicious and the service staff were all very friendly!

My grandparents were visiting, and I wanted to give them a true taste of Nashville. Loveless cafe was the perfect place for this! Despite large crowds, we were seated quickly and had attentive servers. Make sure you don't eat too many of the delicious biscuits before your food comes!

We enjoy heading to Loveless for breakfast or a homestyle dinner. The food is great and the service is too. Don't forget to ask for extra biscuits!

This is a wonderful place to eat, especially for breakfast. Food and service is great. I suggest you go during the week, lines are very long on the weekend.

Love the Loveless Cafe. Always have great food and great pies. Usually a long wait to get in though.

This is a Nashville Gem. However during peak times it take about 1.5 h to be seated and with children that is difficult to manage. The smoke master is a fantastic guy that is willing to share his insight and makes the best menu items.

Expensive, but well worth it for an occasional treat. Food is fantastic, and the service is wonderful. Employees are very kind and friendly.

Good for breakfast. Love the biscuits and the peach preserves. Interesting place to people and tourist watch.

Always good and great place to eat breakfast lunch or dinner. Great shops to explore while you wait. BBQ is good too if you want to get some to go or eat outside. Love the steak and bisquits and the bacon is cooked perfectly. Not a bad thing on the menu. Definetly pick up some jams to take with you for later.Must stop if you are visiting Nashville.

A visit to this place turns into a great experience ! Allow yourself time to walk around and check out the shops.

Good food but sometimes the service isn't great But everything else makes up for that. Bring an empty stomach.

Good old fashioned southern fare like fried chicken, macaroni and cheese and of course BISCUITS! They have delicious cobbler and sweet tea too!

I heard that this was an amazing place to go to, but I honestly beg to differ. The biscuits are the best thing there? Umm...not so much! My friend had a large gray hair in her food and it was so overpriced for what we ordered. Will not be going back!

The best barbeque place in town! I really enjoyed our lunch time here with my workmates here. I'll surely be back.

My first time there was a week ago. I am passing through Nashville again this week and plan on going to Loveless Cafe again. They had the best biscuits and gravy I have ever eaten. Everyone was so friendly and I just love the little stores. The food is great. I would tell all my friends to stop by Loveless Cafe anytime.

Get the country fried steak - you won't regret it !

I have been to the Loveless Cafe three times now and I will go back everytime I visit Nashville. I have absolutely nothing bad to say about this place! The waitresses are wonderful and the food is phenomenol. Prices are cheap and you never have to wait long for the food. You are immediately served with fresh biscuits and homemade jam. After eating, you can shop at the little stores behind the restaurant. They sell their famous homemade jams, hams, spices, sauces, etc. Well worth the trip!

I haven't actually been there, but from reading the different reviews, it has to be quite an experience, depending on which review you believe. The various descriptions could be similar to having diaria and constipation at the same time.
The best assortment of reviews I've read in quite some time. I may take the plunge one of these days, just out of curiosity.

If a Nashvillian says to you, ""You need to go there! It's been around forever!"", STAY AWAY! The only exception to this rule is Arnold's Country Kitchen, a lunch place which is amazingly good. The Loveless Cafe, however, coasts on an undeserved reputation. The first time I tried this place was in the 90's with a friend from out-of-town. We went there for lunch. We tried the biscuits and jams. The biscuits were dry and oily at the same time, if that's possible. They tasted like they were from a steam-table buffet or a maybe day old. The spreads were tasteless and way too sweet. I had the Fried Chicken. You can get better fried chicken at a gas station. Any gas station. The second and last time I went here it was in the early 2000's because my girlfriend insisted we go for her birthday. I tried to warn her. She persisted and finally I said, ""OK, we'll go. Because I want you to have the Loveless Cafe Experience!"" I phoned in advance and secured a reservation for 2 people. We showed up 3 minutes late for our reservation because it had been so long since my last visit I had forgotten exactly where this place was. Anyway, 3 minutes late. At least 4 parties who did not have reservations were seated before we were. Finally we were shown to a big round table that could seat 6. This table stood right in front of the restrooms - I mean people were brushing up against us to go to the bathroom. We ordered after waiting way too long for a waitress to notice we were alive. I then watched as at least 6 tables that had ordered after us were served their ""food"". Finally our meals came. My girlfriend was so angry at the quality of the food I thought she was going to get into a fist-fight with someone. That's when I said to her, ""Happy Birthday! You've just had the Loveless Cafe Experience!""

There was a time when I could recommend Loveless Cafe without reservation. That time has passed.

My last visit was absolutely wretched. They should have been embarrassed to serve the tasteless slop they gave us. Bad fried chicken, bad catfish, bad porkchops...heck, I was embarrassed to have suggested the place. The only decent part of the meal were the biscuits, but they weren't anything special. They were just edible.

Avoid this tourist trap. When they start putting resources back into food instead of developing the land around the Cafe, I might give them another try. Until then, avoid like the plague. There are several better options around Nashville that cost less, are more authentic, and TASTE BETTER.

Examples include Arnold's Country Kitchen (Bar none THE BEST), Monnell's, and Miller's Grocery out in Murfreesboro.