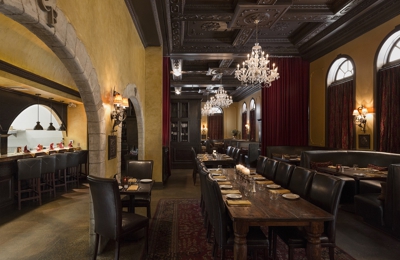 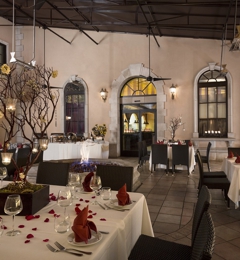 Simply Amazing from the food to the atmosphere. I thoroughly enjoyed my dining experience here and I look forward to my next visit.

Good Italian and ambience is welcoming.

Cafe Firenze is like stepping into a different world. You would never expect this type of restaurant is at the end of a strip mall in Moorpark. You walk in and are transported to old world Italy with romantic lighting and a lively bar scene. I always order the Key Lime Pie Martini - the best I've had anywhere. The pumpkin ravioli is good - not too rich. I have had other pastas here and the sauces are okay. I'm not too fond of the bread they bring to the table. The old world style of the restaurant makes me think of traditonal rustic sourdough bread, not the focaccia style they serve. I would highly recommend Cafe Firenze to those looking for live music, great drinks, and an upscale/upbeat bar scene.

Took my wife here on Saturday, 30 Jan 2010 for dinner at 7.30. Seated at a 2 top in wine bar room. 5 minutes after being seated we were asked by the runner if we wanted bottled water, I declined and we were served regular tap water. We looked through the nice and extensive menu, finished, laid them down and now we sat. I kept looking around going, ""what no bread?"" After about 10 minutes our server arrived to ask if we would like a cocktail, we each ordered, plus I ordered some calamari as an appetizer....still no bread. Hey, I am hungary what's the deal? The calamari was delivered soon after, in a quick and efficent manner, but now, finally they bring a bread basket a full 15-20 minutes after we sat down. Not good. Then the server arrives with my wife's martini and informs me that my cocktail, a Rusty Nail made with Drambuie and Scotch could not be made because the bar had NO Drambuie! In 30 years I have never heard of a bar not having such a basic liquor.

No we are enjoying some excellent calamari, a very large portion, we are not 5 minutes into receiving it when the runner shows up with the 2 servings of lobster bisque soup! I sent it back, saying we were not even close to being ready for the soup. The line has some very serious problems with timing. We finished our lobster bisque, which was a substantial portion and very very good, neither of us finished it due to the rich nature and amount served. As we are eating the soup and we have the empty bowl of calamari, 2 small plates and my wifes empty cocktail glass, just sitting there taking up space. The busbuy has come by the table at least 6 times to take care of a nearby table of 6, but has not bothered to remove anything! At this time I flagged our server and asked point blank why the nearby table was getting such great service and we were being treated like the evil step-children. she seemed taken back, and removed all the finished and used dishes. Our entre was soon served and the wifes risotto was very good as was my chicken marsala. The food was good, the restaurant is very nice inside, but the entire evening was essentially ruined for my wife's birthday by service which was inattentive and unfocused. It was a real disapointment. In closing, let me say the restaurant was full upon our arrival, but half way through dinner, there were a number of empty tables as diners finished and left, so it did not seem that they were being over run in a dinner rush.

The food was good, but I would have to take into consideration the service before I would eat there again. The prices are reasonable, but high enough that an experience of good service is expected.

We were eager to try this highly publicized establishment run by a Top Chef. The selection was very good and we happily over-ordered to sample as many things as possible. This included three seafood apps, a caprese salad, 3 side pastas, a risotto special, and a filet to include a meat. Sadly, though, out of all the dishes, we were only pleased with two of the apps and the gnocchi (real good!). Semi-disappointed that we didn't go away with more memories of any unique flavors -- the risotto special had a greasy deep-fried soft-shelled crab on top (huh?), and the desserts as indicated above, leave you with a very unsatisfied finish. All told, it is slightly above average at a reasonable cost, but I would not recommend this as a place for someone to specifically go out of their way to eat at.

We have been to the restaurant several times. The food was great. The service was okay. The desserts are awful. We are usually eating at this restaurant on ""date night"", so we like to do the entire dinner experience, from appetizer to dinner to dessert and coffee. You cannot do that here, all of the desserts we tried were awful. We actually returned them.

For the first time today me, my husband and our son visited Cafe Firenze for lunch. Yes, I am a Fabio fan from Top Chef, thus, the reason for visiting the restaurant. On Top Chef, I loved Fabio's sincerity and personality.

After reading some of the reviews, I was a little apprehensive regarding some of the comments made about the staff. I found the staff to be extremely friendly and apologetic for making us wait for our table which wasn't more than 10 minutes. Our server Joanna was excellent and on top of anything we needed or wanted. She was also extremely gracious in answering all our questions.

We started our meal with Fried Calamari/Zucchini and Lobster Bisque....both very good! I ordered the ButterNut Squash Ravioli - I LOVED IT!!! The sauce was heavenly (I just wished there were more than just four on my plate! My son ordered the Fetticini Alfredo which tasted more cheesy than creamy, which I did taste and enjoyed it very much. My husband ordered the Panini Roast Beef Sandwich which he really enjoyed. He kept saying something ""about how the sandwich spread really made it tasty and memorable."" Although his first choice would have been a seafood pasta dish, we found that the lunch menu is limited and doesn't offer all entrees. So, we'll have to go back for dinner!!! As a treat, we tried the trio of creme brulee which was a very nice way of finishing our meal.

I'm so glad that we were not disappointed with our trip to Cafe Frienze today which took almost an hour drive. We found the food to be above average and look forward to going back soon.

This past weekend, I flew out from Chicago to see my aunt (who lives in Moorpark). Since we're both fans of Top Chef, we thought we would give Cafe Firenze a try. We had reservations for two at 7:00p on Sunday night (Feb. 16). When we arrived, our table was not ready and we waited 15 minutes before we were seated. When we were seated, we were seated directly beneath a large screen television tuned to the Food Network that cast an odd flashing glow throughout the evening. It felt as if they had placed formal tables in a bar--quite disappointing. After we were seated, it took another 15 minutes before our wait person arrived to even talk to us. We ordered the crab cakes, chicken piccata and gnocchi. A few minutes later, our wait person came back and informed us they were out of crab cakes, so we ordered the roasted yellow bell pepper soup instead. The soup came out and was quite good. The entrees also came out and were tasty (the gnocchi was light and fluffy like marshmallows), although the gnocchi serving size is quite sparse, the smallest I have ever had at any Italian restaurant throughout the country. After dinner we were offered dessert and decided to try the special chocolate red wine cake. The cake was horrible. It was dry and you could not taste red wine or chocolate. I do not know what was wrong, but it was worth sending back. The only positive was that it was served with a Grand Marnier-soaked, chocolate-covered strawberry. Upon telling the wait person our disappointment with the cake, she brought us out another strawberry--an appreciated touch.

I will probably not be going back and if Fabio wins Top Chef, I would recommend he takes the money and makes some serious improvement to the entire restaurant atmosphere. Good food can only get you so far; if I am paying that high of prices to eat in the Conejo Valley, the ambiance needs to be A LOT better.

I absolutely love this place. Great vibe, excellent martinis and very hip decor. Fabio from Top Chef is very charming and personable which adds alot of warmth to the environment. Love the Risotto and Calamari. Friday nights are excellent because of the dj and sometimes there's live music. You must go here if you're intown I""m sure you'll love it as much as me and my husband.

Now called ""Cafe Firenze: Restaurant & Lounge"", it is perhaps the best Italian food I have eaten from Santa Barbara to Ventura.

It starts with the salads & their home-made house dressing. Fresh, bursts of flavor, a great beginning. Then you get into the entree's - more surprises, from fish to pasta, with magical sauces. The tiramisu is also excellent. The staff adds to the experience, friendly and professional. Prices are very reasonable and considering the quality of the food, a steal. You will be pleasantly surprised to have an eating experience of this level in, of all places, Moorpark.

probably one of the nicer places in a cowtown like moorpark (also in westlake village) the pastries are very commendable, the deli cuts the mortadella as thin as you want it, and the pizza is pretty darn good. A great place to have a casual lunch, or pick up some desserts that will impress your guests.