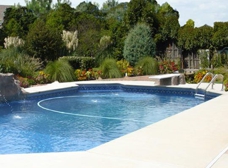 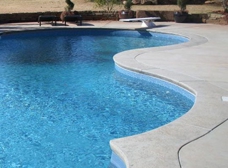 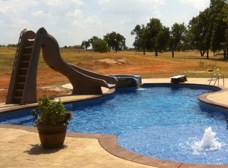 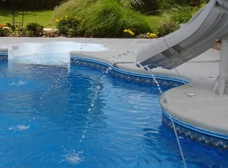 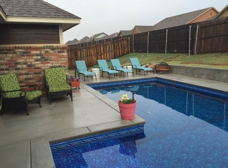 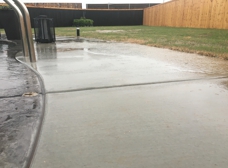 From planning to construction, Melissa and Steve were AMAZING!! I gave Melissa a list of things we wanted and she made it happen within our budget. There were plenty of times for her to up-sell us and she didn’t! We even had all the extra concrete work done with them too. They told us 5 weeks to complete and they met that deadline WITH a week off for the holiday and rain putting them behind. We are so happy with our pool and our friends and family love it too!

S&S completed our in-ground, vinyl liner pool in March 2017. We couldn't be more pleased! They are very friendly and knowledgable when it comes to service after the sale.

We did a lot of research and had many companies come out to give quotes. Melissa and Steve helped us design our custom pool and we couldn't be happier with it!

We've been very pleased with S & S Pools and would highly recommend them. We have a beautiful pool!!

After researching liner; fiberglass; and concrete pools- my husband and I decided to go with liner here in Oklahoma. (Incase the recent earthquakes decided to do some damage.)

We researched and received several bids from different pool companies here in the metro and decided on S & S Pools.

We met with Melissa and discussed and designed the pool the way I wanted it. We have a pretty big slope in our small backyard and new we would need a retaining wall. -Anyone with a sloped backyard should figure this out.- Anyway, we asked Steve for a bid for that as well so that we could have all the concrete poured at the same time. I will say he was very reasonable! (And it looks freakin' great!)

They started our pool on March 28 and we swam the first time on April 23! Steve came out Friday April 22, 2016 and finished some little things and then later that same evening I got a call from Melissa setting up a time to come the next day and show us how to take care of our pool. We are very happy!

BEWARE!Our main concern was the slope in our backyard.contract Jan 21.Complete Mar 10 and today we have a mud hole in our backyard!The water from the yard is flowing over the concrete and into the pool!They also tore our water sprinklers up & our lawn guy met with Steve and told him where to avoid.Last week we find out the gas heater is supposed to be at least 36 inches away from the AC unit and it is 8 inches & husband told him that during construction!Steves answer is for us to pay to have the AC unit moved! They installed the pump where the guttering comes down & water just pours straight down onto the pump!Last week we found 2 places where the liner was coming out & cut in the liner where they attached the ring for safety net to go.Of course they only wanted to patch it an not replace it!The liner is creased and folding in the shallow end near the stairs and is very noticeable. Steve does all the plumbing but is not a licensed plumber,the concrete is already chipping and cracking.

My wife and I had S&S Pools install a 16 x 36 foot Cretian vinyl lined pool for us last year. They originally told us it would take 3-5 weeks for completion, it took 10 weeks and 3 days. The communication was horrible, they left the pool and the surrounding concrete dirty and then it took an act of congress to get them to clean it. We wanted a rock waterfall that would double as a jump platform. Steve, the owner, didn't ask us what we wanted or where we wanted it installed. Instead he ran the plumbing and then had the concrete poured where he thought it looked best. Completely not what we wanted but it was too late. They tore up our sprinkler system and I found a sprinkler head that they should have literally an hour before they were going to concrete over it. It would have flooded out our home and foundation. The pool liner had several creases and was uneven, Steve told us it was because it was cold and that it would fix itself when it warms up's. It's Aug 1st today and we have had a few 100 degree days and guess what, it didn't fix itself. We have several hard spots in the pool because they left trash and rocks under the liner, we have creases and several winkle spots and they broke our deck jets because we asked to have them readjusted and then baulked about repairing them after they broke them. They were installed unsymmetrically to begin with. Still not happy with them but too late, concrete is done. We never received written plan's, they didn't ask us what we wanted during the process. We have a pool that we enjoy but for almost $40k spent, horrible experience and several, several other much better pool companies.

After shopping around, my husband and I decided to use S&S Pools. The second I walked in to the store, I knew we were going to use them. The workers made me feel like a person and not like they were just wanting to sell me something. Picking out the "perfect" pool was so easy. I never felt pressured into buying something that I didn't need/want. That trust is so important to me because now, I know I can walk into the store and just ask "is there something new on the market that we need for the pool?" (I know I am not being taken advantage of). I would highly recommend them and have! I HAVE A BEAUTIFUL POOL!

I had a pool installed, by S & S Pools, last year. I absolutely love it! I decided to use S & S after some neighbors had recommended them. S & S did a great job on the installation and offered great service after the install. They produced exactly what they promised and have offered continued support with all my pool needs. I would not hesitate to recommend them to everyone!!! Thanks S & S!!!

S & S installed our pool in 2009. Any problems we have had were taken care of by Steve or his crew in a timely manner. We take our water in to the store for analysis and they have always steered us in the right direction without charging us for unnecessary chemicals . The inground pool has proven more cost effective than the above ground we previously had; and GREAT FUN for our family. We recommended you check out S & S.

I would highly recommend them. They put a pool in for us 6 years ago and they service it for us every year. They did a great job on the pool and we have never had any problems with them or with our pool. We continue to use them to get all of our pool chemicals and other needs. Their customer service skills are exceptional. There is no question, if I ever had the need to put in another pool, I would not go anywhere else.