General Info
*Senior/At-Risk Hours are 8am-9am Mon-Sat and 9am-10am Sun. As a temporary measure during the current health crisis, we ask you to wear a mask if you are medically able while shopping in the store. Please also limit the number of people in your party. We reserve the right to limit the total number of shoppers in the store at any given time.* Blain's Farm and Fleet in Moline, IL is a department store that serves the agricultural and automotive communities of northwestern Illinois. Blain's carries cat and dog food, livestock feed and supplies, men's and women's clothes, housewares, hunting/fishing/camping gear, sporting goods and more. This location opened in March 1996.
Hours
Regular Hours
Brands
Valley, Valley Trailer Hitches
Payment method
master card, visa, cash, check
Other Link

Parking: Self, On Site, Free 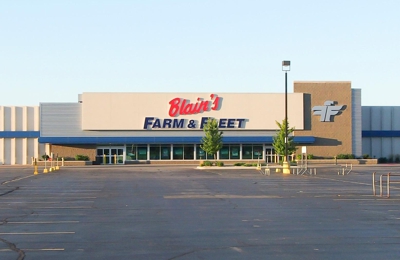 If you are looking for good customer service don't go here. Lot's of people work there but not once have they ever asked if I needed help.

great products and good prices, but lousey customer service.. cashiers are not very freindly and woiuld rather talk to each other. nobody around to answer ??.. desk acts like your a bother.

I took my car here to get 4 new tires. After I went here the next day all were flat. Took them 4 times to get it straight. After the third time they told me it was because my rims were too corroded. They did not notice this the first 3 times, however over the phone their manager could diagnose the problem. So the fourth time I went in I had to watch the tech actually grind the corrosion, because according to him it appeared that the first 3 times it did not look like it was done. Now the tires hold air fine, it just took them 4 times to get it right, taking 4 hours when it should have been 1.