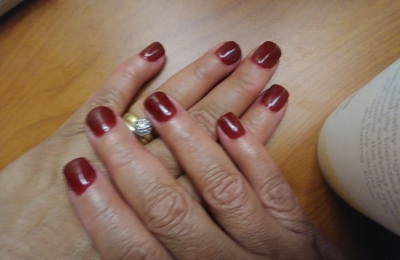 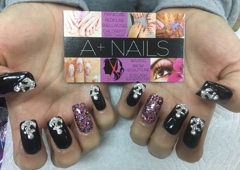 I called about 11 am to inquire if they used dipping powder for nails. I spoke with Vanessa and made appt. for 1 pm. She did an excellent job!!! Apparently dipping powder is not very popular in California but this southern gal loves it. I will recommend her to everyone that inquires about my nails.

Best salon for hair & Nails . Here I can see the art of designs in shellac , dipping powder , French Manicure and also the best hairstyles lust like I walk in a typical salon in Hollywood . Highly recommended !

View all (8)
Helpful(0)ShareFlag
Viet B.

Home of Nails Designs ! You will surprise the Nails Techs Team in A Plus Nails & Hair with their creative and talented designs in Shellac , Pink & White , SNS Dipping Powder .... Highly recommended !

I usually never give bad reviews, but my experience today was less than sub par. The lady who did my nails did a great job. But the service is horrible. A coworker had given me a gift card she received from one of the owners because she doesn't usually like to get her nails done. So I went in, got a set of gel, and handed it to the lady who wrote out the gift card so she could sign it. I asked if she remembered me from working with her at physical therapy. She then said that the gift card was only for the lady she gave it to, even though I had already had my nails done. She told me to give her the gift card back. She was also rude to a lady who wanted to get her nails done because it was her birthday but she refused her saying she would have to wait a "long time" even though there was only 2 other customers besides me there. After that, all other walk-ins were allowed service....

I had a really positive experience my first time here. A little busy, but it was def worth to wait. It is clean, professional, and quick. I made an appointment the same day on a Thursday only about two hours before. The one who did my gel manicure was sweet and very detail oriented. She spent a lot of time putting each coat on each nail- I love that kind of patience and effort. My nails look lovely for my holiday!

Amazing service at affordable price! I got pink and white here and trust me, it's incredible! It's the best I have ever got for a long time! Definitely go back!