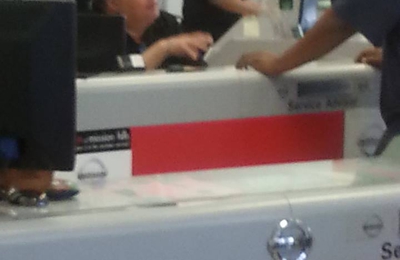 Took my car in for a broken airconditioner and trouble with transmission. Raphael was my service rep, very nice and helpful. He explained the repairs needed, gave me an accurate and reasonable estimate and the car was done on time the day it was promised. Would definitely recommend this place.

Since most people probably don't read long reviews all the way through I'll save some of you some time. This is a BAD review. DO NOT go to this dealer.

Now for those who want to know why:

If there was a lower rating than "Poor - Fair", they would get it. I got an email about a pre-approved loan through this dealer. Seeing as I need a vehicle, I inquired about it. I assumed the pre-approval was based on credit only and seeing as I don't make very much money and work only part time I figured I should ask about that. So on the phone I spoke with Manuel Lava about the loan. I asked him if it mattered how much income I could show and he said that it wouldn't be a problem and not to worry about it. So I took a trip down to the dealership and sat there for almost 2 hours only for them to come back and tell me that they can't approve my loan because I don't make enough money. So in other words they lied directly to me on a very specific question.

A few weeks later I started making more income. So I figured that since they already have my credit on file still, that if I just email them my new paystub that should be that right? So I talk to Manuel again on the phone and emailed him my newest paystub. He said he'd look into it and get back to me the next day. I told him I was busy all day the next and to just leave me a quick message and I'll call him when I'm available. He apparently wasn't listening because he called me twice while I was at work, left 2 identical voicemails, and sent me a text message saying the same thing. I didn't get home until 2am. He calls ma again at 8am the next morning and leaves yet another voicemail and then has another representative call me only 2 hours later. I answered that call since it woke me up and I didn't recognize the number. But when I answered they just hung up. Annoyed, I called the number back and yup it was them. So i kindly (not really) explained to them that I told Manuel that I would call him back when I got a chance and to stop calling me.

Later that day I called Manuel back. He proved to me right off the bat that he wasn't listening to a word I said. He asked "How are you?" I said "I've been better." And he said "Good. Good. So about that loan...." We continued to have a conversation where I told him why I was upset with them and why I didn't entirely believe him when he said they could get me a vehicle no problem. It ended with him being quite rude and telling me, the customer, that I was being, and I quote, "different." Which was followed by him hanging up on me.

All in all, as much as I need a car right now, I will NEVER get one through Nissan of Mission Hills. I don't care if I get the best deal anyone has ever gotten on a car (which I won't) through them. I'd rather go through someone else than deal with their complete disregard for the customer. At least other car dealers try to pretend that they care about you and want to help you.

So long story short I've had bad experiences with this dealer. Not just one but each and every encounter I've had with them, whether it be over the phone or in person, has been negative. I may be biased because I hate most dealers anyway, but I would recommend any other dealer a thousand times over Nissan of Mission Hills.

DO NOT GO THERE.