General Info
For over 100 years, Soderlin Plumbing, Heating & Air Conditioning has provided Minneapolis and St. Paul residents with affordable, efficient and high quality services. Call us now for a no surprise, flat rate price on any of our services. With an A+ rating from the Better Business Bureau, we're eager to prove to you what has set us apart from our competitors over the last 100 years. From water heaters and HVAC units, to toilets and clogged drains, our long-term, highly-trained, master-level technicians arrive on time, equipped with the highest quality parts and equipment. Whether you need service, repair or a new installation, we strive to exceed customer expectations on every call. Our family-owned and operated business serves the entire Twin Cities metro area, as well as the surrounding suburbs, with services that include: Full-service plumbing Specializing in hot water and steam boiler systems Water heaters Air conditioning replacement and repair Full-service heating Flat-rate pricing Same-day and next-day service Metro-wide emergency service Experienced technicians BBB A+ accredited rating We accept all major credit cards. Emergency service available! Call Soderlin Plumbing, Heating & Air Conditioning now for an estimate, and experience the Soderlin difference for yourself! Or visit our website for more information.
BBB Rating
A+
BBB Rating and Accreditation information may be delayed up to a week.
BBB Accredited businesses follow the BBB Code of Business Practices and pay a fee for accreditation review and monitoring. Accreditation is not a BBB endorsement or evaluation of the business’ product quality or competency in performing services. 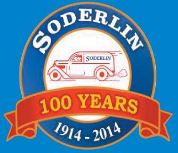 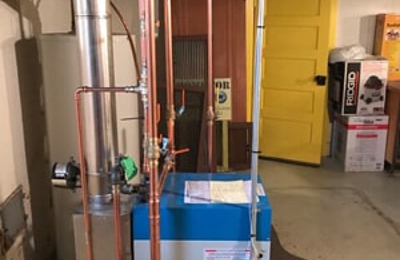 I've had such a great experience with Soderlin. They not only fixed the problem another company made, but have continued to help me when I have additional questions. The employees have been so helpful, from the friendly receptionist, to the supportive staff that has gone above and beyond to make sure everything continues to work properly.

I called Soderlin for air conditioning on the hottest day of the year. They were booked out like everyone else but offered to put me on a list incase they had an opening and even recommended getting on other companies lists in case they couldn't get there. Well they called with an opening with in a couple of hours and said they could squeeze me in. I met the techniciann Jeff at my house with in 30 min. Jeff found a leak in my system, repaired it and had me cool by dinner. He told me the price ahead of time and that didn't change even when he had to wait longer for someone to bring a part out to him. I was very impressed with Soderlin start to finish and will continue to call them for service.

I will never hire Soderlin again. They are way too expensive. They replaced a simple water valve, which took 1 hour 40 minutes. The charge was $448 ($389 plus $59 trip charge). I called another plumber afterwards, and he quoted $150-180, which sounds fair.

Soderlin has given us great service and great works for years. We've found them always to be responsive. We can always count on them to get to us quickly.

And they've always been helpful, often going beyond the project to give us a little break on the price, as well helpful tips to help us prevent future problems and keep our service calls down.

We wouldn't think of calling anyone else.

We asked them to move a small radiator while some tile was being installed, and to hook it up again later. Their workman charged $368 for 20 mins work and told us it would cost almost $500 dollars to put the radiator back again later. I paid him to move the radiator because the workman was here and it had to be done. While draining our water system, he turned the wrong valves and routed hot water to all the radiators in the house during the hottest day of the summer. Our air conditioner was fighting with the heating system for hours before we figured out why, we were unable to turn off the heat, and we were finally forced to turn off the furnace entirely (which heats our water boiler as well, so we had no hot water.) The next day I called them back to fix the problem and the workman said the circuit in our boiler was ""bad"". (I never asked him to check our boiler, he did it on his own.) When I said the circuit had been working fine so far, he said it was a ""coincidence"" it went bad that day and that it ""might or might not work"" if it weren't fixed. At that point our boiler was dismantled, we had no hot water, and in the end I ended up paying another $500 to install a new circuit. I did not call them back for the privilege of paying hundreds more to hook up the radiator again. I called someone else who was happy to do it for $150. Based on price and quality of service, I won't be using this company again.

Soderlin was dishonest with me regarding the scope of a repair to my central A/C and charged me more than 3 times the industry standard, which was over $500 per hour for labor. When I realized that I had been seriously taken advantage of, I contacted Soderlin to complain. The owner essentially told me that I should have done more comparison pricing if I was concerned about whether or not their pricing was appropriate. So, my advice - BUYER BEWARE. These folks do not have any integrity and can not be trusted.

I've had Soderlin do nearly all of my plumbing work in 2 different houses as well as a duplex. They are very reliable, they get the work done right the first time, and they usually finish when they say they will.

They've fixed leaks, moved gas lines, put in fixtures, capped radiator lines, and performed a complete replumb of my duplex and all their work has been top notch. They aren't the cheapest out there, but they don't nickel and dime you with hourly charges, they use a fixed price for various services.

If your time is valuable and you want to ensure it gets done quickly and correctly, call them.

We called for service on our water heater because it was acting up, service person said there was nothing wrong with the heater, but, we needed a filter on our main water line into the house for $679. Two and 1/2 weeks later, our ""fine"" water heater was completely dead. Now, when we absolutely needed a new heater, it was going to cost $1325. Had they told us that the first time, we could have researched other places and got a competeitive bid. But, when you need a water heater, there is no fooling around and wasting time! I have since looked on line for electric water heaters - Sears sells one for $250 - just a little difference. I would never Soderlin Plumbing & Heating again! I asked for more information on the heater and 3 weeks later I still don't have it.