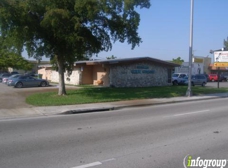 Dr. Cuevas actually really CARES about animals. He also is reasonable and kind. Over the past few years I have had many encounters with this office. The staff is very friendly and accommodating. When my 16 year old cat became diabetic and we started him on Insulin injections he taught my husband to give the cat injections. I am a nurse but had a broken arm at the time and could not do it. When my husband then accidentally rolled over the same cat's back side with his car, fracturing his hip and tail on a Saturday we had to take him to another Emergency Vet. The other vet charged us almost $2000 for two days of care and we took him home against medical advice. They wanted to keep him there for another ""couple of days"". We took him to Dr. Cuevas who gave us pain medication and advice and we took him home at a cost of $25. He lived another 18 months until he began having seizures and we had to euthanize him. They had gotten to now Puff and were wonderful allowing us to stay with him and not charging anything until I picked up his remains. Puff's brother Snickers also had to be euthanized in the same time period and they were equally caring and accommodating, staying open after hours for us. We now have a 16 year old dog who just had surgery last month. She was high risk due to her age but is doing very well. Dr. Cuevas never pushes you to do something and discusses all options. He also directed us to fill our antibiotic prescriptions at Publix for free.