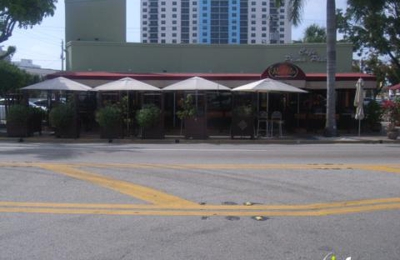 Wonderful food, great service, completely cold management, the manager Giuseppe Marino asked my wife and I and my brand new inlaws to leave the resteraunt for a 9pm seating. I have never been asked to leave a resteraunt for a seating of customers that 1. Have not arrived, 2. For me not being intoxicated, 3. For a member of my party not being loud or obnoxious. Giuseppe please consider a class in manners, who will instruct you in how to mind your manners and be a pleasant person.

I recently when to this restaurant and the ambience and the food was pleasing. Candlelight dinning very romantic! They have a discounted menu Monday through Friday from 5 pm to 6 pm.

They offer a variety of main course dishes and with reasonable portions. I really like the two desserts ordered: the tiramisu and the cheesecake.

Totally disappointment!! Went there with the family for my birthday. The hostess knew we were celebrating a special occasion but couldn't care less. We tried making a reservation over the phone but were told, no reservations only first come first serve.
When we arrive we were told we would be seated in 30 -45 min. So we sat at the bar and waited............ and waited. We started seeing people being seated who had arrived after us. We only needed a table of four, so it wasn't hard to find one. The hostess kept telling us, we were next in line, but ever happened!!! He even said he had to seat reservations first. He was caught in his own lie since he had already told us they did not accept reservations.After waiting for one hour and 45 minutes, we left extremely angry and totally disappointed. DON'T GO TO PRIMA PASTA IF YOU ARE NO WILLING TO HEAVILY BRIBE $$$$$$$$ THE GUY AT THE HOSTESS TABLE TO BE SEATED. WE LATER CONFIRMED WITH FRIENDS IN THE AREA THAT THAT'S THE ONLY WAY ON HOW YOU GET A TABLE AT THIS RESTAURANT. UNBELIEVABLE!!!!!!!! NEVER COMING BACK, FOR SURE.

I must say while my husband and I were visiting miami beach we had read the reviews and decided to give it a try.. We were very pleased with the restaurant.

Cafe Prima Pasta used to be a great place to go, however the last couple of times have been dreadful. The menu choices seemed to be fewer and what choices we did have were bland, uninteresting and cold. We won't be going back again all we got for our money was bad food and mediocre service.

I recently dined at my local favorite Cafe Prima Pasta and am always amazed how the food is consistently delicious, a rare occurrence in Miami. I had the vegetable ravioli which were out of this world. This place is definitely worth checking out.

Really sweet location and great food. I ate here with a couples friends the other day and really enjoyed myself.

The first time I went to this restaurant will be my last. The photos of the rich and famous covering the walls were impressive. The food was not. The bread brought to us was not fresh. We sent it back and got more of the same. We ordered veal parmesan. The veal portion was generous but tasted very greasy. It came with a very small portion of penne pasta. My date ordered Caesar salad, which did not come with anchovies. The waitress was nice enough to make a special request for them. The salad arrived, practically dry romaine lettuce, with two (no kidding) anchovies. We had the tiramisu for dessert and it was, in our opinion, way too mushy. While the atmosphere and service was good, I would not recommend this restaurant for good Italian fare.

My girlfriend and I went on V-day (first time there), and although we were 30 minutes late and concerned that we would lose our reservation, the host couldn't have been nicer. He asked us to wait at the bar, and before we could even order drinks, he had a great table available. The waiter came over, and through his authentic Italian accent he told us ""his"" specials. The four items he recommended were exactly what we had our eyes on. The Exotica salad was much better than described - with fresh grilled shrimp cooked perfectly! The crab ravioli was really good too. Great Service - Wonderful Atmosphere - Reasonably Priced - Winner!

I heard great things about this restaurant. I was mistaken. I grew up in NY and know great Itallian food. It is not existant at this establishment. First, my date and I sat at the bar waiting for a table for about ten minutes. The wait was not the problem. The wine was the problem. We tried literally five different red wines and they were all very bad. Second, the food was deplorable. We ordered the shrimp and scallops as an appertizer. The scallops were small and tough. My date ordered the lemmon chicken. It tasted like a piece of grilled chicken with some lemmon splashed on top. I ordered the black linguini with seafood. The seafood lacked taste, and did not appear too fresh. I was very dissappointed. Third, I gave my credit card to the waiter. He acted as if I did not give him my card. After a few minutes of rangling he reached in his pocket and found my card. The only good part of the experience was the olive oil. Don't waste your money at this place. There are soo many great eateries in Miami. This is not one of them.

Great service. Great for a date. Wonderful food. A local favorite and gem! It gets packed on weekends so make a reservation. if not, enjoy a drink at the bar...

I've already gone to Prima Pasta twice and I can't wait to go again. The staff is very friendly and make you feel at home. The food is excellent and a bottle of wine is a must. If there is a little wait time, no problem...just have a seat at the bar and enjoy a drink from their open bar while you wait. Sit outside if you want to enjoy the beach breeze..or sit inside for a more intimate setting. (the dim lighting inside is awesome for a romantic date). The food is delicious ( I had the veal parmesian and my date had crab-stuffed ravioli) It's no wonder why I've been there twice and the first time, I saw Lenny Kravitz hanging out, and the second time, Matt Damon was sitting right next to us with his family. It's my favorite place to eat here in Miami.

This is without a doubt the best italian restaurant in the area. The food is outstanding and the atmosphere is classy and fun.

i love this place ,so dark and romantic , nice barry white, and eros ramazotti music, nice martinis, the food is 10 + service is fast and the waiters they really care about deatelsi love the carpaccio and the fish oreganatta. tiramisu and sambuca.

Whenever you enter at Prima Pasta, you are involved in a enchanted atmosphere, with the rich decorations, the pictures, the soft aromas of a very elegant and exquisite cuisine, and the friendly attention of everybody.
Do not miss the opportunity to enjoy this unique Restaurant.
10+.
Buon apetite !

my kids love this place, they celebrate birhdays like no one in miami, the food is super, the wine list #1.this is are favorite place in miami.