Great haircuts. Walk right in or check in online. 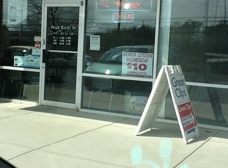 Go at Your Risk. I have had it with this location for Great Clips. I went in yesterday and requested a light trim on the sides, cleaning up the sideburns and around the ears and to take a little off the top. I came out with a military GI haircut. They just don't listen to you as a customer. I will no longer go there and find some place who will give a good cut.

I brought my daughter in for a cut. I came with a photograph of the cut she wanted. The stylist argued with me about the photo, telling me the cut I wanted differed from the photo. I told her no, I want her hair cut EXACTLY like the photo. After speaking to me like I was an uneducated child she began to cut my daughters hair. Other customers commented on the way she addressed me and another even left! The cut came out NOTHING like the photo and they refused to refund my money. Called supposed 'owner' and left message. Still no call back.