General Info
Since 1964, the team at Manchester Honda has proudly offered our valued customers a Plain & Simple pricing philosophy that eliminates the hassle and pressure of negotiating. We provide you our lowest price upfront! Visit our Honda dealership in Manchester, CT, for outstanding sales, service and financing today.
Hours
Regular Hours
Extra Phones 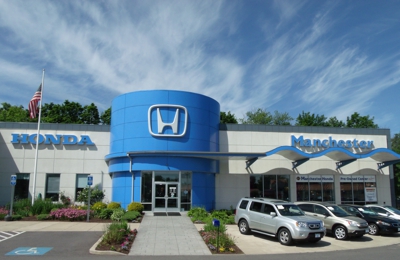 My husband and I purchased a 2008 6-cylinder Honda Accord. Six months later, April 30, 2008, it was in the shop for the "malfunction indicator" which was on steady. Manchester Honda gave me a rental car, a KIA, (which I was not happy with) while our Accord was in the shop. I asked why I couldn't get a Honda to temporarily drive. Tom Graham, the service manager who needed re-training for customer service, explained to me that it was too costly for the company to have rental insurance!. So for TWO weeks I drove around in a KIA while I made payments for a New Accord which I could not drive!

On May 1st, the service manager, Troy Roberts informed me the technicians were still trying to resolve the problem. On May 2nd, I called the sales manager, John Casey, and asked to speak to the owner about this situation. After being questioned by Mr Casey about my request, he finally said he would leave the owner, Jonathon Lareby, a message to call me, but could not guarantee he would personally call! After leaving two voice mail messages myself for Mr. Lareby, he finally called me back explaining he was at the dentist getting three teeth filled! I explained the situation and he said he would have to speak with the service manager since he did not have all the details. He never appologized for any inconvenince. I asked him to replace our car with another. He said he could not do that. I felt no reassurance and empathy from this man.

On May 6th, the service manager, Troy Roberts, who was the only one I found to have good customer service, called me to say a new replacement engine was being ordered!.

Finally, on May 15th, I was called to say our 2008 Honda Accord with a new engine, was ready to be picked up.

My husband and I drove down to pick up the car. No one greeted us. No one apologized. We were simply handed our keys and told, "No charge"