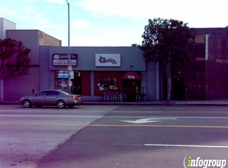 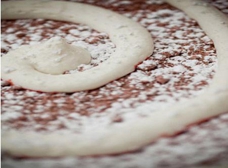 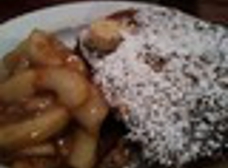 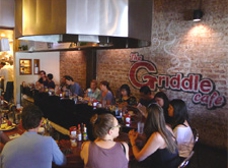 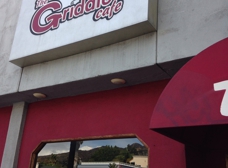 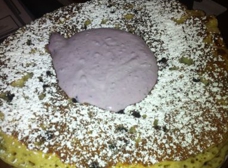 The largest pancakes in town by far. Just one stack is enough to feed a family of four. My favorite is The Golden Ticket which I always share with my significant other. A couple of eggs and a side of bacon and I've pretty much met my calorie intake for the day, LOL. Yes, lines are super-long to get in but I've found if you get there by 8 am or so, it's not that bad. Well, on weekdays anyway. Staff and service are always friendly. A must if you're in the Weho/Hollywood area.

LOVE! When I've gone with a big group they usually let you have a room in the back.

Always a wait but their pancakes are really good! If you're ordering their massive pancakes, go with at least 2-3 other people or you'll be taking home leftovers. There's always street parking in the neighborhood.

Love, love this place. Ok there's going to be a wait, but its worth it and I have liked everything I try. Share the pancakes! They're massive and amazing.

thats what makes this place. especially for breakfast food.

That is one thing you wont forget when you leave this place. How enormous and stacked of pancakes your plate was. Very delcious. I would definately recommend this place to everyone!

Waited 45 minutes to eat breakfast this morning there, only to be shoved like sardines into this dumpy, seedy, dive-bar-looking breakfast place. The coffee was so disgusting and that's my first criteria in making a good breakfast place. The food was very average. After breakfast, we stayed chatting in our booth (i figure we waited 45 minutes--we earned it!) and were asked to hurry it up since the line outside was at an hour and a half wait now. The food was pathetically average, and this place is all hype and no substance.

Oh my, best go here when you have a hangover or starving for great breakfast at 3pm! Because it’s served all day.

From A-list celebs, this is the best place to see who’s who in Hollywood. Just remember the wait will kill you! This local hang out is very popular for the starving and craving oversize pancakes. Just remember to share.

My wife's office was closed for Rosh Hoshana, so I played hooky and we went to breakfast. I'd read the hype about the Griddle so we tried it out. Wow! Though it was crowded, we were immediately seated. We ordered coffee and they brought us a pot of coffee that would put Starbucks to shame. We both ordered omelets, but our server convinced us to share a single pancake. When the food came, the pancake was the size of the entire plate. The omelets were perfectly made with big chunks of chicken in mine and whole shrimps in hers. I had fresh fruit, which was wonderful and I tasted her potatoes, which were good. Needless to say, we couldn't finish anything. Not a good place for children, as we watched a young boy try to eat his chocolate chip pancakes. He couldn't even put a dent in them. The next time I'm off during the week I'll definitely give this place another try.

Came here on a saturday and boy was there a wait. After about 30 minutes we got seated in this small but cozy dining room.
It was super busy but our server was quick and very helpful. I ordered the Bluesberry and OMG amazinng! they flavors just explode in your mouth. My brother had the chocolate chip. He liked his but it was just a little overwhelming. Of course we had leftovers because honelsty I dont know how anyone can finish and of those pancakes. I cant wait to come back! Its a little out of my way but definatly worth the drive!!

The griddle that flopped.....They are serving a bunch of slop. The pancakes are rubbery and tasteless the Maple syrup is like some type of chemical. When you look around the majority of the people are leaving the food on their plates. This place needs a good chef and a good scrubbing very dirty inside and out. The booth seats are ripped and you are sitting very uncomfortable. They bring you greasy glasses of water. This is a disaster....

This place is a breakfast staple in LA. Long wait, but it is worth it if you have the patience.

The pancakes are unbelievable and have tons a options and the portions are crazy. Everything on the menu is awesome and tasty and would recommend this spot to basically anyone.

This is hands down my favorite place to go for breakfast in LA. There are so many fun choices that sometimes it can be hard to make a decision. The new item are the Red Velvet Pancakes, which are only there on select days, but if you follow them on twitter/facebook you will know when to go. Usually only served between 12-2. Its one pancake with cream cheese frosting. But, hands down my favorite item, which is a MUST HAVE is the peanut butter crusted french toast. If you like PB you will LOVE this. The batter has PB in it, then they dip it in crushed up nutter butters, PB whipped cream (mild PB flavor) with more cruched up nutter butter on top. You may have to wait 45m for a table, but its worth it....a way around the wait, become facebook friends and tell the owner a few days ahead of time when you will be there and she will put you on the list to be seated :)

French Toast lovers... this is the place for you!

They have an array of French Toast options from the decadent to the just plain wacky.

The also serve French press coffee right at your table, which is a nice touch. Host is usually very friendly, service tends to be pretty decent as well considering how fast paced the environment can be.

Im not sure what all the hype is about the restairant. I do see people lined up on the weekends. Ive gone twice. The dishes are definitely filled with good portions of food. Pancakes were okay. But the Huevos Rancheros were not my cup of tea. Not a totally bad place but didnt leave me wanting to go back either. Oh, and its packed with people on the weekends.

I've been twice. First time sat at a table. Second time at the bar. Glad I went both times. Second time my girlfriend and I spent more time visiting with people around us which added to the fun and interest of the place. Unfortunately I realized afterwards that I had been overcharged and I wasn't happy about that. Could have been a mistake on their part, could have been deliberate. The guy who sat us was cool, but the guy serving us was rather unemotional. I'll be more careful next time and I suggest you be careful too unless you don't care about that sort of thing. Maybe he had already added in his tip? It was a party of 2. Still I recommend it for what it is and that's a great place in Hollywood to have a big meal that could be two meals if you take home your leftovers. I met a couple of guys from another country, I guy I'd seen on tv and movies, and this one girl I wish I had spoken to because I still can't remember what show I remember her from. Oh well, I'm going back next time I'm in town. Maybe she'll be there again.

love this place!!! the menu is awesome and the portions are extemely generous!! there is also a young hip vibe to the place that makes the atmosphere fun!

For 3 years I've heard the hype built around this place and after years of turning around b/c of frustrating lines I couldn't be bothered with, I finally caught it during a lull and sat down with my girlfriend.... needless to say I was very excited.... I love breakfast!!!
First off the ""too hot for his own good"" manager rudely pointed to our seats while not even making eye contact and then topped by basically throwing two menus at me.
Our waitress whom was very pushy yet not prompt seemed like she was in outer space and distracted by the other staff members. It seemed like actors and actress auditioning to play rolls as waiters and waitress on a WB pilot. Very tiresome:( Then the kitchen staff was very obnoxious considering there proximity to the dinning area. this is all restaurant management 101.... THEN there was the food, absolutely the most absurd portions of food rivaling the Saddle Ranch. It would've be one thing if it was tempting but I wouldn't go that far. I ordered Huevos Ranchros and considering the kitchen looked and sounded like they were of latin decent I figured it was a good choice. NOPE! plate presentation was gross!!!!! Never being a picky eater I almost couldn't eat it on sight alone. It was basically bean, raw egg, tortilla, and literally a block of cheese, smothered in some kind of broth to simulate enchelada sauce which was basically 1 part water 1 ketchup. SOUP in other words... Meanwhile my GF is contending with her 80 egg omelet which she could even put a dent into. There is more then the bill.... very expensive, some how between both of us I managed to drop about 50 dollars including the 10 percent tip. BWT the Cactus Cooler they call fresh OJ was 5 dollars pop plus tax...
NEVER AGAIN, If its busy it reminds me of a middle school cafeteria so do not waste the time standing line go to AROMA down the street for breakfast, its the same price but the service is a bit better and the food is great.

It is illegal in the city of Los Angeles to serve water at an eating establishment without the patron asking for it. I went last weekend and our waiter automatically brought 4 glasses of water to our table, which all went untouched. This along with huge portions make this a very wasteful restaurant. I ordered the Mom's French Toast and it was raw in the middle. I like the vibe and the host, but it's not enough to make me come back for more.

This place is very cute, i ate outside with my husband and service was fast and friendly. Mimosas are delicious. I ordered the banana pancake which i only finished 1/3 of. it was way too much for one person, but delicous. some celebrity walked out casually but didn't catch her face. I'd go back and chill outside again, it was very pleasant.