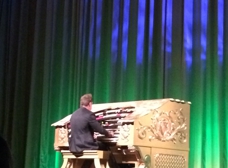 A must experience. This Disney owned movie theater has little extras before each show such as a Mickey and Minnie dance/singing show. A great one to take the kids to.

The El Capitan (owned by Disney) is a great place to see to see disney features. With kids movies, they will often have a live stage show before the feature. It is a big, glamorous, historic theaterwith easy access to the red line!

Beautiful theater. Loved the organ player before the movie. We try and see any new Disney films here.

This place really does have an historic feel. The theatre itself has so much detail everywhere you look and has just a magical feel. I came here recently to see Nightmare Before Christmas in 4D and was thoroughly impressed. The organ player before the movie was amazing. Would highly recommend coming here for any movie because it makes the movie going process an entire event.

The shows are unique and the actors are fantastic.

The prices are very reasonable.

If you ever have a chance to see any Disney movie opening weekend at the El Capitan. Do it. The introductions. The set pieces and extra information. The panel discussions. The special guests. And, the whole experience when seeing the film. Disney entertains you before during and after. Rather than destroy the old theater with pipes, water lines and concession booths - they worked with what they had and sell you bottled drinks. The commemorative tubs (w/lids) for popcorn are always a draw for mothers, teachers and anyone who works with or has children. The food and drinks purchased in the ice cream shop next door can be taken in to the theater! The special 3-D showings of ""The Nightmare Before Christmas"" always create great memories. As part of the showing of the first Narnia film - the preshow included the audience getting ""snowed"" on just before curtain. When ""Miracle"" the hockey film first showed, at the conclusion of the film. The original Olympic Team rose up from the Orchestra pit to a standing ovation. No where else can you experience a film like at the El Capitan!!

The El Capitan is a magnificent theatre. As you probably guessed it, the theatre is filled with charm from Hollywood's golden age. More importantly, however, it features the latest in movie theatre amenities. Almost every movie is presented in digital projection, and the El Capitan's sound system is second-to-none. Plus, most shows feature a great pre-show, whether it snows in the theatre (during Chronicles of Narnia), there's a live stage-show (during Cars), or there's a light show (during Pirates of the Caribbean). I highly recommend the theatre, and if there's ever a movie I want to see showing at the El Capitan (they show only Disney films), I definitely see it there.

I first experienced the El Capitan at my first dot com when most of the company walked over to catch a movie. It's a theater in the grand old style complete with a pipe organ and pre-movie show. It's not the most modern place but it's packed with nostalgia.

I've been here a couple of times over the past 6 years. When I saw ""Finding Nemo"", they actually concluded the movie by letting loose thousands and thousands of colorful tissue paper fish from the ceiling. What a great experience! This is a really good theater for kids; lots to look at.