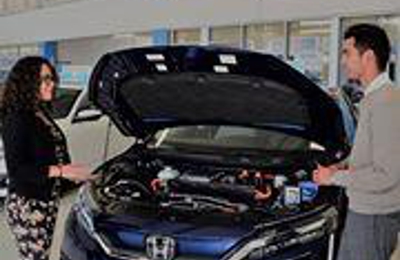 Having taken by car to service departments at other Audi dealerships closer to where I live, I was skeptical of how pleasant my experience might be. But service manager Valentine Rautescu was friendly and accommodating throughout the process, making it clear how important it is to drive the extra mile for better service. I can't recommend the service department of Audi of Downtown LA -- and specifically Valentine -- any more highly!

Thank you Preston Jimenez for your excellent customer service and helping me find my perfect A4! He was very knowledgeable, professional, and exceptionally helpful. He took the time to really help me choose the right car. I definitely recommend anyone to ask for Preston and let him help you! You will walk out with the best deal for your car - you will not regret it!

Stephan Khukoyan helped me get a great 2017 Audi Q7 for great deal. Great person to show you in & out of the vehicle. Will do everything to get you the price that best fits your budget. He went over and out to help me. I was in a new car in 2 hours. Great dealership... won't go anywhere else.

Eddie Perez and his team are always wonderful, friendly and take great care of my cars. I wouldn't go anywhere else. Thanks Eddie, Alan, Nicole, Val, Luche et al

Horrid!!!I would give this Dealership and its employee's negative stars if possible. I emailed on a Monday about a used Odyseey and was contacted by Miranda and told the car was on the lot. Show up and low and behold it's not on the lot it has been sold over the weekend. So we drive all the way downtown for a car that doesn't even exist. So now we are dealing with Josh who starts trying to sell us on another deal, we listen to his offer decide we are not interested at the moment and leave. Later we decide that the offer Josh promised us actually doesn't sound so bad so we call him back, he promises us a price at all in and we call this morning to come see the car. So they say come in a manager also guarantees us the price Josh has quoted. We get there and Josh is not there but now we are dealing with Norma. She also says if thats the number we were quoted yes that is what we get. So we test drive the car, and are pleased but then of course she comes back, now her manager wont honor the price that 3 different people have guaranteed us. He comes over and tries to give us his speech about how it's just too low and he's doing us a favor by offering us this other price. No regard for our time (I am 9 months pregnant and have 2 kids that I need to get watched), they lied twice to get us down there only to then change the original agreement. This is why people hate car dealerships. Do not go here! They will lie to get you in and then switch the deal and hope you are too tired to care.
Also after I posted a negative review on Yelp another manager who wasnt there nor spoke to us tried to claim we asked for a different model than what the deal was for, which is another lie. We came to see and buy the car that 3 people quoted to us at a set price. Even people not involved will lie here!

Brought my A4 for service, the service advisor was Luchie Bennette. Dropping the car was a breeze, in less than 5 mins I was already out to get the rental car. The car was ready when I arrived at the dealership to pick it up. Luchie was professional, courteous.

I always get my A4 serviced here - by far the best service I have received anywhere on any of my cars. Valentine Rautescu is simply incredible. He always remembers my name, and makes sure that a driver is ready to take me to work and back to the dealership at the end of the day. He provides such friendly, personal service it is almost like leaving my car with a friend - yet he is also always professional and I know that my car is getting the very best service. I love that when I pick up my car it is always beautifully washed!

I have contacted most of the Audi dealerships in Southern California in search for an Audi S5. Most of the dealerships over the phone were not very receptive in providing the answers to my questions. Stephen Khukoyan, a salesmen at Audi of LA was the only contact I made by phone who was willing to answer all my questions. He also find the exact car I was looking for at the price I was willing to pay. When I met him in person he was very professional and accommodating. I purchased the Audi S5 from him as my experience was very good. I would recommend contacting Stephen if you are in search of an Audi.

Zorik Garibyan was the best Salesman I have worked with to date. He was extremely professional, knowledgeable, and willing to meet me at a price point that worked for us both. I never once felt pressured at any point. Next time I am in the market for an Audi, I will be sure to contact Zorik.

First time leasing a car and everything was explained carefully and patiently. Amazing service from Nabeel Esraw and Steven Massachi. Really appreciate their time and effort!

I am super grateful to have purchased my Audi A6 from Downtown Audi! After visiting other Audi dealerships, Downtown Audi was the only one that seem to value me as a customer.

Immediately after arriving to the dealership, I was warmly greeted by Amir Khoury. Not only was Amir extremely patient in my scope of the array of cars that were available, but also extremely knowledgeable about what each vehicle had to offer. After test driving a couple of options and speaking more in depth with Amir, I was excited to pursue what will later become my new Audi. The team at Downtown Audi was extremely hospital and was able to offer me a deal that I could not resist. I would highly recommend this Audi location to anyone who is interested in purchasing or even learning more about what Audi has to offer. Be sure to ask for Amir Khoury!

I recently leased a 2017 Audi S6 from Audi of Downtown LA--with the superb assistance of Byung "Nick" Choi. The entire process took 25 minutes following a phone call to Mr. Choi. He had the precise car I wanted in stock and quoted me the deal I was willing to accept without dickering--beating the best deals I had been quoted by 2 other dealers. And when I arrived and reviewed the paperwork, the numbers matched the quote. The car was prepped and ready to go. No messing around! Thanks, Nick. Rick Ryan

We purchased one car here and bring another here for service. Overall a good dealership with nice people. I appreciate the loaner vehicles.

I purchased a Q3 at Audi of Downtown LA. This was my first independent car purchase and Luka Tukvade was awesome to work with. He was professional, knowledgable, and easy to talk to. I really appreciated his patience and expertise throughout the entire process--from the test drive, to showing me other colors of the car side-by-side, and finalizing the purchase. Overall, the experience was great and I trust them for my future servicing and purchases in the future.

I brought in my car and received great service. Valentine Rautescu took great care of my car and got it back in a timely manner. It's a pleasant experience bringing in my car to Audi of Downtown.

I found this places years back and highly recommend it. Even the location is a bit further of where I live and work, but totally worth it. The main reason i am so happy with this place was because of Mr. Valentine Rautessu at the service department. He is always helpful, HONEST and with positive attutide. I do not need to go back and forth for the problem to be fixed like other places. I have been so hassle free and relax after dealt with Mr. Valentine at Audi Downtown LA.
.

I have purchased, leased and serviced cars here. It is super easy to drop and pick up. Valentine Rautescu is an awesome service tech.

I have been working through some issues with on my Audi S4 with Eddie Perez in Audi service. He has taken good care of me and my car, going above and beyond what was necessary on two service occasions in the past six months. The first was when I needed some major parts replaced - he took pictures of where the parts went, what the old parts looked like, and explained what they did and why they needed to be replaced. On the second occasion he worked with Audi North America to resolve a warranty repair on my car. Will definitely continue to have my car serviced at AUDI DTLA

What can I say - Kit made the buying experience very enjoyable - - very business focused, fast, honest/knowledgeable and great customer service. I would highly recommend Kit if you are searching for a Audi in Los Angeles. Also, the service at Audi of Downtown LA was very professional - great experience in the finance office to driving the car of the lot.

This is a great dealership! Very professional white glove experience. Nabeel Esrawi makes every customer feel like a VIP. He is my go to person for purchasing or leasing a vehicle. Impeccable service!