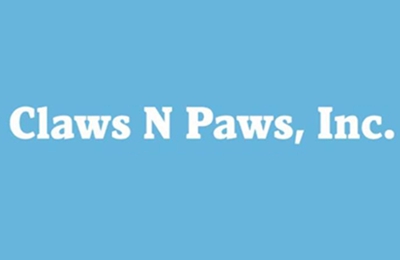 DO NOT BRING YOUR PETS TO CLAWS N PAWS!!!!
We brought our dog to Claws N Paws and will not be returning. They cut my dog and didn't even notify me before I left. I called the next morning and they didn't seem to care and said "Sometimes small dogs have thin skin and get nicks." This is no nick! It's the size of a dime and a very open wound. They also forgot the put her collar back on and I had to go back to get it.

Excellent service . my dog was happy! I was greeted with a smile . My dog was like family. I was very happy with the way my pet was handled and groomed. Will definitely use claws and paws again

Very poor business etiquette. I made an appointment on Monday (11/16) to have my two dogs groomed on Friday (11/20) and even had it set up to have them done for a certain time because we are leaving on a trip. Was told bring them at 8 when they open so they would be done first. Brought my dogs for 8 and was told that they can do them and the lady would not even look though her book to see if an appointment was made. She said she is too busy. I told her I show where I called Monday and to please look in her books to see that I made this appointment. Still no. I asked that even though I made an appointment and can prove I called to do so, she couldn't do it? NO and she said she wasn't grooming them. I even explained we are leaving for over a week so I can't bring them back next week and she said no, you aren't getting them groomed here. Again, no apologies and very rude! We have been bringing our dogs there since we moved here at the beginning of the year...and I will never bring them back! Very, very rude and very, very poor customer service!

WORST Pet Grooming business on the coast if you love your animal PLEASE do not bring it to this place. Its a bunch of old women who seem to think they should work on nothing but AKC registered dogs and if your dog isn't show quality they want to run your pet down say they are covered in mats and they want to just SHAVE your dog. They are totally clueless when it comes to dog grooming and you will find yourself taking your pet somewhere else after bring it to this place to get you pet groomed right DO NOT WASTE YOUR MONEY on this place

I used this groomer ONCE. I dropped my dog in the morning but didn't get him back till closing time instead of the two hrs I'd originally been told.His coat was not cut well, super choppy at his full tail. He had not been taken to potty as he was in pain and pooped/peed as soon as he got outside to the parking lot. This was very upsetting to him, as it would be to any well trained dog.

The woman at the front desk was simply rude and seemed very put out by having to do her job of ringing me out. She had also lied to my face when I first arrived to get him and asked when he'd last been out. People lie, animals don't.

Though their physical location is very convenient, I'd not trust them with a pet of mine ever again and I'd certainly never recommend anyone else do, either. If there were a lower rating than one star, I'd have clicked that.

i am very disappointed in their service. they told me one price on the phone then lied when the dogs were done being groomed just so they can get more money out of me.. I will NEVER go back to them and I will let everyone know how they are...... AND they dont even know how to groom dogs...