Member of the Better Business Bureau 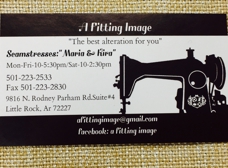 I had a wedding dress dry cleaned and took it to them to put on consignment. I brought it in in the box from the cleaner and it was in pristine condition. It didn't sell but when I came to get it, it was black grimy filthy on the wedding dress and the veil. When I remarked on it she made it sound like it was my fault getting it caught in the car door. What???!!!! No one could have gotten it this dirty with their shoes, it was terribly mishandled or their dressing room floors are grimy. It's so dirty that I wouldn't even let my granddaughter use it to play dress up. I am so sorry I took it to them. No wonder it didn't sell being that gross! I give them two stars because they give away dresses that don't sell to people in need. If you are wedding dress shopping, it might be the place to go but I don't recommend selling there.

A Fitting Image gave away my coat!! I took a wool coat that my great-aunt had HAND MADE to a Fitting Image to be altered. Long-story-short, there was a sickness in my family and the picking up of the coat went undone for a while. HOWEVER, I called to tell them that I had not forgotten it, and that I would be in as soon as possible. (I had also moved away from the area.) The lady assured me that it was there and would be there when I could make it in. When I went in a few weeks later, they told me they had given it to Goodwill, since it had been there past the alloted time. I asked where they sent it and they pointed up the street to the Goodwill Donation Center. I went up the street, and no coat (the lady there told me A Fitting Image doesn't even donate there) so I went back to A Fitting Image and they told me they really didn't know where it was sent; it could be a number of places where they donate! They didn't offer an apology at all--Quite disappointing since I had used this place for tons of alterations--even my wedding dress, which they had ripped in the alteration process!!. (I also never received an explanation or apology for this!) Would not recommend this place if customer service is a concern to you! ...Probably would've let this all go, if they had just offered some sort of apology or showed any concern for giving away something that was very nice and handmade and SENTIMENTAL to me!