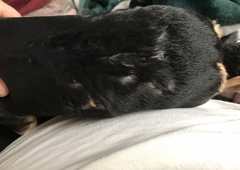 I was drawn in by the incredibly cheap deals. I brought my 12 lb, 11 year old dog in for a teeth cleaning, normally costing $400 at my current Vet. The cleaning was advertised for $110, who could refuse? I brought in his shot records from his regular vet, nothing needed updating. After they had me fill out all the paperwork and went through his shot record thoroughly, they take me into the examination room and inform me that I had to pay extra for pain medicine, anesthesia, extractions, antibiotics, bloodwork, irrigation medicine, special soft dog food, liver supplements. and so on. They were very insistent that I agree to all these added charges, to the point, rude. What astounded me is that I was told these were considered optional. No Anesthesia? Is that legal? I was in it already this far, so I signed the agreement for all the added items along with legal documents, basically giving them no responsibility for negligent care. My dog was given 12 extractions. His teeth were white. His gums were bleeding, and he was in pain. He was not groggy at all.. My bill was $315.

The office manager and the doctor were of Arabic origin and their English was very difficult to understand. 12 months later, the dogs' teeth are back to their dark color and his breath is awful. But I'll go to my regular vet.

I adopted a puppy from a rescue service and had her spaying done here as it was included in the adoption and as the rescue sends a lot of work here.
I'll start with Dr Al seemed very nice when I met with him before the surgery and that the spaying iseems to have went great it is now just over a month and the incision is barely visible.
The day after I noticed her back was very red and extremely sensitive I brought her back in to get looked at and was told it was either a skin irrational or an infection. Was giving medicine and a week and half later her back seemed to be getting worse and started to develop Scabs. And brought her back in again and given more antibiotics. After another week or so the "infected" area was developing more scabs. I brought her to another vet for a second opinion and was told she had thermal burns, that when dogs are in surgery a heating pad/unit is placed under them and that sometimes there's either a malfunction or it was just set to high.I called and talked to a manager and told her what happened she asked for the vet I took her too and she would request the paperwork and call me back. I didn't hear from for a few days and I called back. And she told me that the vet I took her to said she didn't know if it was an infection or thermal burning in her paper. I asked the vet the next day if that was the case because I had another follow up appointment and she said absolutely not. I stated it was cause bya burn. The manager then told me that they didn't use a pad during her surgery. I asked her if she was 100% sure she said yes I was in the room. I asked her if she was there then why did she not say that when I called last week. Long story short all I wanted was for them to be aware of what had happened so they could check their equipment and asked for my other vet bill to be covered which I said was only 40 dollars and not for the money but principle. And she said they don't do that, that they'd only cover it if I went there.
Overall very disappointed with the way they handled it afterwards. I even contacted the rescue service and informed them what happened and they contacted them and said they had a completely different story. Accidents happen I understand. But the way she acted
Afterwards is unacceptable. And no my puppy is permanently scarred.
**It should also be noted prior to bringing my puppy here I looked at the reviews online and they were all outstanding. I noticed on one of the visits back to the office to re-evaluate her skin there was a sign by the check out offering discounts on bills for 5 star reviews online and on facebook.

Dr. Al is wonderful. Caring, compassionate and extremely dedicated to well being of animals and their families. Thank u for all u do. Great coupons n prices too

Dr. Al is a animal lover and a great vet, he makes you feel the love he has for the pets and I hope he stays forever....Buddy Rico Annie and PJ are blessed to have such a good veterinary and thank you for caring so much as it means a lot Patricia Cox and family

Dr. Al really does a good job taking care of our boys Rockie and Jacques. He takes time to explain things and is very caring. The staff are nice an efficient. Prices are reasonable. I have been taking my pets there for over five years.

I have been taking my pets here for a cpl years and its awesome. They are great!

I TOOK MY LITTLE KITTIES TO THIS LOCATION YESTERDAY AND I WAS GRATEFUL FOR THE CARE I RECEIVED. I RECEIVED CAT PACKAGE 3 TO MAKE SURE I TOOK CARE OF MY LITTLE ONES. HAPPY FACES, CHEAP PRICES, AND TENDER LOVING CARE. I RECOMMEND THIS PLACE TO ALL MY FRIENDS! :)

Great place to take your loved ones to get them their yearly vaccines or any emergency surgeries reasonable prices and they also have coupons available online will definitely will be coming back every for my loves yearly shots see you guys soon!

Love this place!!! Dr Al is great with my doggie he loves him and all the girls as well. great prices as well!

This place was great! The staff work well with my dog, and the prices are amazing!

Absolutely LOVE this place!!! The staff was caring and the doctor was very informative!!! I high recommend for anyone, especially if you are on a budget... Did i mention they have GREAT prices :)

This place is very efficient. I got everything done with my cat that I went in for. It was very fast and there was no wait. They got me in the same day. The staff was very helpful and knowledgeable. It was nice to go to a vet that had everything on hand and that could be done the same day.

I love taking my animals here. The Doctor is a great guy and will explain everything in detail so you feel more at ease. My cats love him and the girls are super friendly. The prices are great and I take my pets here all the time. I so would recommend this to anyone I know and am totally going to go back and see them anytime my pet needs. 5 stars to Pet Care. Love you guys see you soon!!

i would highly recommend taking your pets here! they were awesome the staff were really awesome and sweet. they took really good care of my dogs! great prices and great service! i cant over how awesome they are! i will definitely be bringing my dogs back

i had a wonderful experience here, it was nice and clean and the staff were very friendly i would definitely recommend them. the prices were great and the service was even better! they took such excellent care of my 2 dogs, i was very impressed

i am so pleased with the staff and service i got here. i would highly recommend them. they took very good care of my cat and i! i got her spayed there and they did such a wonderful job! i will definitely be coming back they were awesome

i absolutely love this place. i am so happy with the way that my pet and i were treated. i really feel like they took their time to get to know me and my pet. i went in because my cat was really sick she had been sneezing a lot and wasnt eating or drinking, i was so scared. they got right down to business, they didnt run me through loops like many of the other clinics i have gone to. they told me what was going on with her. they worked with my budget and they had really great prices. the doctor was very knowledgeable, and the girls there were great. they all had big smiles and were very welcoming. i really appreciate everything they did for me and my kitty! i would highly recommend them!

I am very happy how well the staff handled my three dogs at one time. All of them needed their annual shots and toe nail trims. One of my dogs a little nervous but the girls were very professional and knew exactly what to do. I was in and out even with three dogs.

I board my cats here every few months, and they're always happy and healthy. 5 stars

I've been taking my animals here for quite some time now and LOVE them. Great prices and friendly and caring staff. Took my dog to 3 vets and could not get a straight answer till I took him here and they told me what was wrong with him and treated it immediately. I won't take my pets anywhere else.