Resurrecting the old to the new! 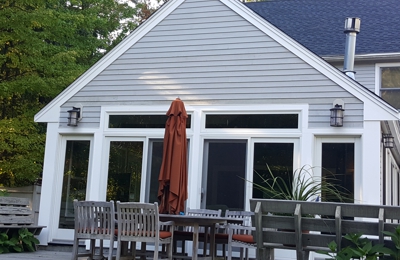 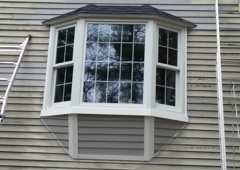 Aaron and Stacey were AWESOME!. We had them do some work for us last fall and it was a AWESOME! experience. We liked it so much we had them come back in the winter and finish the project. The room came out AWESOME! Check out the pix. BTW did I mention they were AWESOME?

I hired Christian Carpenters to replace two basement windows. In a December windstorm, the wind broke one of my basement tilt-in window's latch and blew the window in, three days before I was going out of the country to a place where there was no phone service and sparse internet service. The glass didn't break and I was able to duct tape it closed. The windows are non-standard size and I knew it would be a custom order (that and the small size of the job had me putting off doing anything about them long after I should have). I keenly wanted to get this job started before I left. I made an appointment with CC for what turned out to be a Saturday when we had a major snowstorm. I expected them to cancel but they didn't. Aaron showed up, described how he could replace the windows and gave me an estimate. He was able to draw up the contract on his phone, I was able to sign it and electronically charge the down payment to my credit card also on his phone. Within minutes his business manager, Stacey, had emailed confirmation documents-- all very professionally done. Aaron ordered the windows while I was away, with an estimated install date between February 1 and 10. On January 26, Stacey contacted me to say the windows had arrive and could Aaron install them on January 27? He did and the work is superb. He corrected a problem with the windows being too close to the ground, and re-positioned my sump pump hose and dryer vent. Aaron and Stacey were really pleasant to deal with. For you non-Christians, don't let the name of this business scare you-- yes, they are Christians, but they keep it separate from the business unless or until you indicate an interest. I would definitely hire them again with complete confidence.

Aaron and Stacy were a pleasure to work with on this project. Great customer service and communication throughout the whole process. I have already book Christian Carpenters for a second job.

Professional fast work! My new stairs are sturdy and beautiful. Matched work to home as they had always been there. Very courteous and left area immaculate. Will hire again!

We called Aaron to schedule an estimate to have him come look at our front window and knew we had to have two doors replaced. He came out and explained to us the various options we had when replacing the window, and his wife Stacie was very prompt in emailing us quotes right away for the different options. We decided to get the doors replaced first. The day of install, Aaron came right on time.He even picked up the storm door for us. Unfortunately it was a day of torrential downpour but the rain didn't stop him! He replaced our front door and trim around it, even moved our doorbell over for us. Put plastic down all inside the house so not to get anything dirty, very clean and organized. He then installed our back storm door, explained all throughout this whole process what his plan of attack was and if anything came up he let us know right away. I would HIGHLY recommend Christian Carpenters to do any work in your home, We're very happy Customers!

Fantastic carpenter! Was hired to do a job that turned out to be more complex than anticipated and the result was superior. More than I would have hoped for. Exceptionally professional and very fair with both pricing and alternative strategies. I rarely recommend anyone, but highly recommend Aaron.

He's was very polite, and prompt. I had him remodel my bathroom and build a closet off my bedroom. He worked very hard and was done in great timing. Everything came out awesome and I'm completely satisfied with it. Price was reasonable also. He cleaned up everything when he was finished as well. I will definitely use him again for future projects.