We serve our clients with all-star sales, service and selection for luxury and commercial vehicles. Our inventory of new, pre-owned, and commercial Mercedes-Benz vehicles, draws satisfied clients from League City, Clear Lake and throughout Houston.

Whether you’re searching for your next luxury car or treating your current vehicle to our factory-trained technicians and outstanding selection of certified Mercedes-Benz parts, let us be At Your Service today! We will not disappoint.

Alex Rodriguez is conveniently located on I45 South, League City Parkway exit and U-turn. ONLY 20 MINUTES FROM DOWNTOWN HOUSTON. 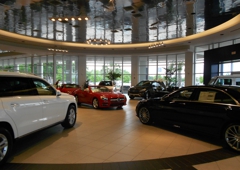 I will never be back here again!

My car was worked on here my (Steering Lock Motor) went out on my steering wheel and cost me $1,568.85 to fix. It was dropped off on Saturday and picked up on Yesterday (Tuesday), drove my car to work this morning and my check engine light came on. Called the dealership to find out if my battery would be kicking off my check engine light, and they informed me that it shouldn't but I would need to bring it in. I scheduled it to be brought in today at 12:00pm spoke with Eric the (Service Manager) and told him what my complaint was, he told me that they would pull it back and find out whats going on. I waited for about 15mins in the waiting area he came back in told me I was ready to go. He told me that an engine valve was left open, and that was it. Never one time received an apology from anyone for my inconvenience and their negligence of doing half as work I honestly believe if my husband came with me I would have been treated differently; but customer service is truly an lost art. Eric is a piss poor Service Manager and because of that I would never set foot in Mercedes-Benz of Clear Lake again!

Ran across some negative reviews here for Arod MB, and can't imagine you're talking about the same dealer I've been going to for over 5 yrs. I have sent friends, family and coworkers to them, and they go on and on about how equally great their experience was. Who else gives you free maintenance for life on your new car (I'm a happy recipient of this program!), they pick up your car for service and deliver it right back to me. They brought a car for me to test drive at my office, and made the entire buying experience a breeze. They have a rewards program so I can get awesome benefits at hotels, restaurants etc. List goes on. It's definitely not a stuffy place, it's just good ol' Texas hospitality and I love them! They have a customer for life!

Absolutely the best car buying experience I've ever had. Easy breezy, the entire team was so accommodating, knowledgeable and respectful of my time, from bringing me a car to test drive at my office to final delivery and having Lucy teach me all about the car, much more than I ever wanted to know! The kicker though is that free lifetime maintenance service, I've never seen anybody come close to offering such a deal. Buy a car and you don't pay for maintenance! And then if that wasn't enough, they have a rewards program that gives me access to great deals at hotels, restaurants etc. I've already used their limo service and have to say I feel like a celebrity! Thank you Arod MB for going such lengths to create such an amazing buying experience! I know your service is top-notch as well, so will definitely be coming to you for that. For those other reviews that were so negative, all I have to say is give them another chance, the dealership I've dealt with is nothing like what you described. I promise.

If you think you're safe dealing with these guys because of the Alex Rodriguez name, what they've spent on their facility, or the amount of advertising they do, forget it. The reality is they're no better than a corner used car lot.

Bought a car from them that couldn't pass a state inspection because it had faulty brakes and tires. Guess the fact that they knew that I was buying the car for my wife to take the kids (aged 3 and 4) to school just doesn't factor into their bottom-line-only way of thinking. Dropped this lemon in my lap and never looked back.

I'm a rich white man that was going to buy a cl63 from them, but while I was there I heard the GM and some other ""managers"" ridiculing a woman (also white) who was also herself buying a new car. They talked about her sooo bad, how stupid she was, ""how could she have great credit and dumb brains at the same time, etc."" It was horrible! Of course, I then used my phone to see exactly who runs this place, and saw that there were NO WOMEN/ NO BLACKS/ NO other minorities of any kind working in any form of management there!

Look, I must admit that I don't carry a ""diversity medal of honor"" either, but I've interviewed and hired enough people to know that there are some awesome women, blacks, asians, hispanics, etc. out there that would make great managers and executives! So there's no way they actually objectively considered any of those and didn't find ONE that would've been great somewhere! RACISM IS WRONG!

I flew fighter planes side by side with some of the best pilots I've ever seen, and they were BLACK MEN! I've been at command post where outstanding women and other races have been charge and did an excellent job. So I grew to learn to open my eyes and appreciate ALL PEOPLE from all walks of life. HELL, when we were at war it was a black guy who intercepted a missile that would've killed me!

I DON'T SUPPORT SEXISM OR RACISM, so I did not buy nor will I ever buy a car from Alex Rodriguez MB!

This dealership has got to have the worst service in the world. I purchased a vehicle from them earlier this year (2009) and while the car is great, service is like pulling teeth without the novacaine. The bad service started right after sales. That's a story I won't even get into. But I want to recount how hard it is to set up a simple appointment for an oil change. Their online form is a joke. I am not even sure it works.

The service people are rude and condescending. The only person you can actually get on the phone is a receptionist who immediately transfers you to service where no one answers. You are instructed to leave a voice mail which no one responds to. After much calling to try to sepeak to a live person, I waited on the line to be transferred to Juan Renteria. (I pulled his last name from the site as he only said his name was Juan). He was rudeness personified. It was like he was doing me a favor to speak with me. I am terrified to take my car in to that delaership to do anything for fear they would sabotage it.

How can anyone be so unfriendly if you are in a service industry? I am stuck there are I don't want to screw up my warranty by going elsewhere.

I WOULD NEVER RECOMMEND THIS DEALERSHIP TO ANYONE.

I've noticed a lot of negative reviews of Mercedes-Benz dealerships in town, especially when it comes to service. So I wanted to share my positive experience with Alex Rodriguez Mercedes-Benz in hopes that it will give all of you some hope that good dealerships still exist!

After years of disappointing service at several dealerships around town, I found Arod Mercedes online and scheduled my first service appointment. Within one hour they had me scheduled to pick up my car, service it and return it to me without putting on a single mile! It is the most convenient, efficient and professional service experience I've had.

Since then, both my husband and I (and all of our MB owner friends) are wondering why we put up with bad service for so long - and we'll never go back to another dealership. I would recommend Alex Rodriguez Mercedes-Benz to anyone!