You buy it, we plant it! 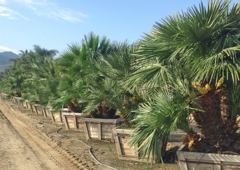 We needed plants and trees to landscape the front area at our office. So, we went to Moon Valley Nursery because they advertise the 90% discounts. And it was real. We got what we were looking for at great rates.

I had several trees delivered and planted at my house. They were on time, and did a fantastic job! They helped me find the best place to put them, and gave me advice on the care they would need. They even staked one tree as a freebie for me. They have been the best I have ever dealt with. I love these guys!!

Purchased six large boxed trees, the planting crew was great and they treated you like a friend, not just worried about selling you something, but they want you to happy with your purchase. Very knowledgeable about everything. Have answered continual questions through the hot summer to keep my trees thriving and looking well. I will not shop anywhere else, for my landscape needs. These people run a business using old time business practices, fairness, support, and great customer service. You may find things cheaper at other places in town, but I don't believe you can find better service and customer appreciation. Try them out, I don't think you will be disappointed.

The crew did a marvelous installation job with the Palm Trees in the back and Palm plants in the front and back yard. We couldnt be happier. The staff was very knowledgeable and fun to work with. We would highly recommend Moon Valley for anyone looking at Landscape Options and Installation.

"I lost 4 of my bottle trees during the freeze this year. =( I came across Moon Valley and decided to check it out. This place is amazing! It is 12 acres of awesomeness. The managers are great and very helpful. They even do free planting if you buy a tree in a 24' bx or larger. You can also pay a small fee and they will plant whatever you need.
I bought 4 trees and they were delivered and planted today. They look great and the delivery was on time. The delivery staff was very professional. I look forward to using Moon Valley for all of my future planting needs.
Oh and you can also bring your dogs with you to check out the Nursery.

The desert trees I bought from Moon Valley Nursery for my new landscape look great. The prices were within my budget. I'll buy trees from them again.

When we were at Moon Valley they helped us pick out all of our trees and scheduled planting for a week. A staff member called and said when they would be here and they showed up exactly on time. They planted the trees and cleaned up all the mess before leaving. We are pleased and will be doing bussiness with them again.

The entire staff provided great customer service and were very helpful. I was promptly greeted and taken care of during my visit. Awesome help! Thank you

The tree inventory at Moon Valley Nursery is big and diverse. When we went to their store, we could choose from a wide variety of desert trees, palm trees, all year green, etc and we certainly found what we were looking for. The salesman was courteous, helpful and gave us a price within our budget. We scheduled the delivery for a specific day which they kept as requested. The whole experience was good and we are very happy with our new landscape.

The manager of Moon Valley, was also terrific to deal with. He greeted me and spoke to me as though I was a long-time valued customer (even though this was my first time at the nursery). My whole experience with Moon Valley Nurseries has been an excellent one and I will definitely be using them again for any future needs or projects. I highly recommend them!!

Pleased with the staff, they were polite and helpful. I bought 4 pompous grasses and they took off right away and have grown tremendously in just a month's time. Purchased many other plants all have done very well. Highly recommend Moon Valley Nursery.

I bought a couple of rose bushes and Heavenly Cloud Sage for my new “yard corner” landscape. They look pretty. I followed the planting instructions from Moon Valley rep. I also bought one of their Moon Valley brand fertilizer bags. Everything seems to be working harmoniously as my new plants enjoy their “corner” and I enjoy their view. I am satisfied with the Moon Valley Nursery services. I will buy again from them.

Their palm tree selection is wonderful. Moon Valley Nurseries grow their own trees and I could negotiate the price. They delivered the 2 palm trees and planted them in my front yard. Overall, I’m happy with their services.

We were required by code to plant a palm tree and 3 plants in front of our office. We bought the palm tree and plants from Moon Valley Nursery and the new landscape which also included some rock, looks great. We will be buying from them again.

I have been coming to this location for a while now. The quality of their product has always been top knotch, but their sales staff and customer service used to be lacking. However, I recently ypurchased 2 trees that were planted in my backyard after 2 of mine died last winter. To my suprise the sales guy didn't try to pressure me into buying bigger trees and I actually feel like I got a pretty good deal. I bargained a little and they gave me an extra bottle of their Moon juice for FREE!, which i must say seems to be working really well so far. The trees were delivered and planted within a week and the delivery crew did a great job and actually cleaned up this time. MVN has been a well known name around the area for some time now, and if they keep this up I'm sure they will be for quite some time. 4/5 stars for now, but a few more experiences like this and i will give them all 5.

Bought a tree 10/01/10, at going out of business sale, Northwest location, paid for delivery and expert installation,ha,1/2 off,ha, guaranteed for 1 year,ha, call us after 3 months to keep guarantee, 3 months called, number disconnected. Figured they had gone out of business.Tree started dying in Jan., died in March. Saw ad for Moon Valley again, called, told to bring in photo of dead tree. Wife called told too bad so asked for supervisor, he said wait 2 weeks and call again.Called after 2 weeks and told tough luck weather killed it, complained again, got number for general manager. Called, he would return call in 24 hours. 7 days later still waiting for return call. Am writing complaint to attorney general and BBB. Not nice to cheat old folks. Gave one star, can't give minus stars.

We bought approximately $3000 worth of trees from this place just under 1 1/2 years ago. We asked what trees would be best for our area and we had moon valley plant them as it was a big project. Even within the first year, the trees did not appear to be thriving. Our phone calls were never returned, I had to call several times to get the right person, finally, just under the year, their ""expert"" came out and spoke with my husband, and was not much help. I was concerned that the trees were not going to make it, our year would be up and we would be out of luck. Well, out of 8, only 3 are alive and the others are dead. I finally spoke to a manager at the Eastern location who told me that really we should have planted trees like our neighbers have that are doing well. That really made me mad, they are the experts, I thought and they were the ones that picked the trees we had. He then said"" well you know the year is up, but we will work with you, pull out the old trees and give you a really good deal on replacements.. Like I want to give them more of my hard earned money, What a huge disappointment...

I had my gardner come down to the nursery with me to pick my plants. Walking around its better than a park. The price were a little high but there service made it worth the extra money. The young man was very nice that help us load our cart and point out some pretty flowering shrubs. The plants looked beautiful after my garden was done.

Everybody was so polite and nice. Walking in and out with all the help made me feel like a celebrity :) Great selection of plants to choose from.

I bought a full landscape package for my yard and they planted it, including my irrigation. The Only bad thing was they forgot to hook up the water to 2 of my plants. They did come back out and replace them along with fixing the water lines. Over all a good I reallly liked that they had a big selection and I got to pick my own plants.