General Info
Godfather's bail bonds in Las Vegas, NV are dedicated to posting bail and bail bonds 24 hours a day. Posting bail in North Las Vegas and Henderson as well. Our bail bond agents and bail bondsmen are fast and reliable. Next to Clark County Detention Center. The owners of this company have over twenty six years of experience and are both born and raised in the city of Las Vegas. They have many contacts and their knowledge comes in very handy when it comes to most cases. If they can't answer a question they have attorneys that can be reached twenty four hours a day seven days a week. We here at Godfather's Bail Bonds are committed to give the best service at the best price.
Business History
since 1999
Hours
Regular Hours
Services/Products
Bail Bonds 24 hours a day, 7 days a week and 365 days a year!! * 24-7-365 * Payment Plans Available * Immigration Bonds * 10 Years Local Experience * We Run Bonds To The Jail For You!! Specializing In: * Battery * Domestic Violence * DUI * Bench Warrants * Narcotics * Cash Bond * Surety Bond. * Property Bonds
Brands
And Others, Assault, DUI, Domestic Violence, Robbery, Theft
Payment method
debit, discover, visa, mastercard, check, all major credit cards, paypal, financing available, company card
Location
Downtown
Neighborhood
Downtown Las Vegas
Amenities
We Write Large And Small Bonds For Any Jail - Anytime!!
Accreditation 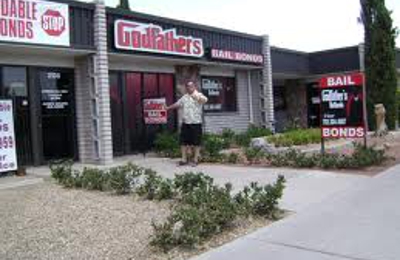 I recently ran into a situation that put me in jail. This was for a crime that I did not commit and had already faced charges previously. To my surprise, police showed up at my house late on a Friday night and arrested me. I was able to call Jacob @ Godfathers bail Bonds in Las Vegas and he was able to bail me out within a couple of hours. He also drove me home and offered some good advise.
I really appreciate the service of Free Bail of Las Vegas and would recommend them to anyone that may need their services.

I Was picked up on a minor upaid traffic ticket , i have never been arrested before in my life. Instead of telling the truth that i would be automatically released on OR within 12 hours, these guys used scared tactic and misimformation to scare my wife into getting bail from them. The truth is i was actually relsead before their bail even was posted but again they lied to her and told her the bond was already posted within minutes which is a bad lie cause i was not even processed at that time. I was as the officer stated and i verified afterwards with three other officers, released when i was suppose to on OR and the bond's man actually told my wife the police lied and i would be there for days unless i pay them for bail. It is bad enough for a mishap like this to happen to anyone, to have this kind of tactic to make a few bucks and prey on uninformed woman is dispicable. Shame on you and i will be sure to let everyone know about your sales tactic!

"I wanted to thank you again for your help last night. My 'good for nothing' brother was home at 6am... even at 27 he's still my baby brother. I appreciate your professionalism and flexible payment policies. Thanks again, Jacob"

I want to thank you all at Godfather's Bail Bonds, for putting up with me last week. thank you for reassuring me and helping me understand each and every step we were going threw. I am so relieved and so happy with your company

I loved this Las Vegas Bail Bonds. I was impressed with all of the information and felt all of my questions and needs were taken care of.

My Son-in-law was taken into custody at his first court hearing. Luckily one of your agents was there on another case. Godfathers Bail Bonds was able to post the bond right at the court and my son-in-law was released without ever having to be processed at the main jail. Without you guys, I can't imagine what we would have gone through. Thanks for you being there!"

“Thank you so much, your service was greatly appreciated. Just want to again thank you personally . Thank you Matt for believing in me and thank you Bob for your quick response.”

"My brother was arrested and called me to bail him out. I called several bail bond companies before I was lucky enough to find Godfathers Bail Bonds . The other bail bondsmen I talked to were either rude or were just interested in how much I could pay them. Jacob was totally different. He explained to me that my brother would be seen in court the next day and suggested waiting to see what would happen before I bailed him out. I followed his advice and my brother was released with the charges dropped. Jacob saved me over $2,000.00. I can't thank him enough!"

I called Godfathers Bail Bonds and they took care of everything. All I had to do was call them and I was released right away.

""We were very impressed with your overall service and more importantly, with you and the manner in which you handled the delicate situation. You were most gracious, understanding and respectful.""
Carmen L. - Phoenix, AZ.

I am a hardworking father. I was sharing a house with a few friends. Well, I didn't know it but one of my roommates was allegedly involved in illegal drug activity. One day the house was raided by the authorities, everybody in the house was arrested. I have had a few run ins with the law. I know it is a common saying but really, “I was in the wrong place at the wrong time.”

Godfathers has helped me and my family many times before. They recently have bailed out both my son and grandson. Whenever any of my friends or somebody in my family is arrested, I direct them to Godfathers. I think I have sent them over 20 people over the years. They have always treated my family with respect. The first time I used their professional and knowledgeable agents was in the 1990's. I swear by them. I know that if I cannot make it to them, they will come to me. They will work out an interest free payment plan that the family can live with. They do whatever it takes to get the job done.

My name is Yosef Garza. You bonded out my brother Amir from the immigration jail. I found your company on the internet. However, I called many bail bondsmen and some said they couldn't do it and some said it would take a week or more. I wanted my brother Amir out as soon as possible because he is a good, hard working guy and owns his grocery store. You guys were good. You did all the paperwork in less than one hour and my brother was out from jail that day.

He thanks you and I do too.

I would like to take the time to commend the services that my family received from Godfather bail bonds. They still believe there are good people out there.

A hand shake, a hug, the feeling of relief, people who honestly care about human life and do not judge people because of their mistakes.

I believe SBI has gone above and beyond the call of duty. I bless these wonderful people and send out a prayer for them that one day it is paid forward for them."

" Godfathers Bail Bonds took care of our documents when we needed a quick service and he told us all we needed to know. He called me first before starting work. He explained the process and they have and didn't over charge me!"

I was extremly scared when I received a call from my husband telling me he was in jail I didn't know what to do. I was very skeptical of going to a bail bond place also. I looked in the Yellow Pages and Vegas Bail was the first place that stood out to me. I called and had no clue what I was even doing. The people at Vegas Bail went through everything with me to ensure that I knew everything. I went down to there office and the people are so welcoming and assured me that everything will be ok. If I ever knew anyone that was arrested I would DEFINATLY send them to Vegas Bail. Great Company and Very Professional people. Thank you Vegas Bail!!