General Info
Welcome To Centennial Toyota We are your  Las Vegas Area Toyota Dealership specializing in new and pre-owned Toyota vehicles, Toyota service & Toyota parts. Our knowledgeable sales staff have been trained and certified to provide amazing customer service. Our Las Vegas Toyota Dealership has been selling and servicing the Las Vegas area for a long time - our experience is second to none! Receive a vehicle quote and schedule a service appointment all online! Your Las Vegas Toyota Dealership sells reliable and fuel efficient cars! Come visit our show room today!
BBB Rating
A+
BBB Rating and Accreditation information may be delayed up to a week.
BBB Accredited businesses follow the BBB Code of Business Practices and pay a fee for accreditation review and monitoring. Accreditation is not a BBB endorsement or evaluation of the business’ product quality or competency in performing services.

Services/Products
* New Toyota & Scion * Accessories for Toyota & Scion We will service your vehicle whether you bought it from us or not. With years of combined experience, our Service Department is staffed with the most qualified ASE Certified technicians ready to answer your questions and address your service needs. Utilizing advanced Internet-based, state-of-the-art diagnostics; we are able to provide the highest level of technical competence. Use our online form to schedule an appointment with our Service Department. Please feel free to contact us at any time. We look forward to working with you on all parts, services, auto body and collision repair needs! Service Features: * ASE Certified factory-trained Technicians * Trained professional Service Advisers who understand your vehicle * Fixed right the first time * Service while you wait * Low cost rental cars available
Brands
Toyota and Scion
Payment method
financing available, visa, master card, amex, debit, check
Location
Conveniently located off the 95 or 215 Freeway on Centennial Center Blvd
Neighborhood
Centennial Hills
Accreditation 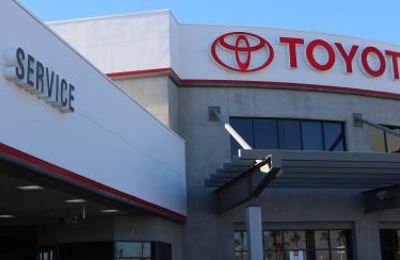 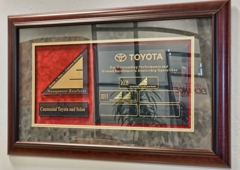 Please take this review very seriously when considering buying a car from this place... they have cost me nearly $10k and offered me $900 as a trade in for a car they'd sold me only 2 months prior for $7500. I purchased a used Corolla on 10/22/15, the car had only 80k miles on it (roughly) for $7500 (tax&fees brought it up to well over $8k). On 12/23/15 the serpentine belt fell off which can be very dangerous when you are driving (you lose power steering). I took it to Findlay Toyota and was informed the bolt holding the belt had broken and was lost in the engine. I agreed to pay nearly $1k to have the work done, but when they completed it they informed me the engine was knocking and would need to be replaced. This would cost $4600. They advised me of the work Centennial had done and replacing this belt was one of them. This made me wonder if the reason it fell off was due to them not properly installing it. Findlay suggested I take it to Centennial and that if I'd purchased it from them they would help me out of this situation. I called Centennial 4x the following business day and got no return phone calls. The next morning I started calls again and spoke to a sales "manager" named Jason who showed zero empathy, handed me off to the service dept and I had to make an appt w them. When I checked in at 9am on Saturday they were under the impression I was going to pay for them to confirm the diagnosis. The service "manager" did not hear the knocking until I went to the car with him and pointed it out; at that time he agreed it was there. This confirmed it was overlooked when they initially "inspected" it. If I could vaguely hear it the day I drove it home then I can see how it was overlooked. With that being said, this car should have been taken back into their possession and money should have been refunded in full. That is the ethical and correct thing to do as a company.

Needless to say that did not happen. Instead they offered me $900 toward a trade in. It gets worse, the sales boy offered me $2500 as a trade and they'd pay off my loan. Ody had no clue how an actual loan works which is really sad since he's attempting to sell them to customers. He kept telling me they were going to take care of my loan balance... when I met with finance (after 4 hours of waiting) I notice they loan was refinanced into this new loan and the trade in was listed as $900. Basically these morons thought I was as dumb as them and would just look at my monthly payment and run. I asked to speak with a manager and here come Jason again. This idiot had already passed me off to Ody the moment service walked me into the sales room. He told me he would increase it to $1400 and I can either take it or leave and take my car elsewhere. He was rude, unprofessional, and condescending (which is the all-time low coming from a car salesman, dressed as if he has an adult job).

At any rate, I walked and I went to a Honda dealership, bought a brand new 2016 civic which I know won't die at 80k miles and from a respected dealership that has integrity.

FYI for any of you that have had similar experiences with this awful business, please call Toyota directly to place your complaint; the number is 800-331-4331

One last thing to keep in mind, test it if you must, call the dealership, leave a message for someone, anyone and see if they call you back. Believe me you will want to work with a company that returns calls in case something does come up after you purchase. Check online reviews, you'll see they are known for not returning calls.

Another thing to notice is the 30+ sales reps walking the parking lot, but they have only 4-5 finance employees which is why it takes 8 hours to even get out of this place.

You will also notice each review will show a reply from the owner, this is an auto reply generated in order to appear as if they are handling the negative complaints, trust me, they are not.

Never ever go to this place a this place is all liers
They are a band of Mafias
I purchased a car and at the end they canceled my purchased I paid Five thousand down payment I have not got the money back yet .
I need to get my money asap .

this plase is always good they know what they are doing

never had ny problems with service dept. Sales dept is outstanding as well

I have a great service representative and am always pleased with my service.

I've purchased two scion xBs from here never had an issue. Recently went in to purchase a tC. It went well but to find out I was just teased with the vehicle for 2 weeks then told I needed a co signer. When I said I did not have one the tone in the guys voice changed to somewhat angry monotone and he said to return the vehicle asap. When I had showed up I spoke with the GM he then stated it was my income. Which didn't make any sense to me what so ever cause the previous vehicle i got from them was over 500 a month with an income of 1750 a month and this recent one was under that with slight;y more income. So with that being said I found another vehicle that was 5000 less in value then the tC and they still said it was my income. So I first started with the tC for 17,998 at 450 a month with 500 down and 2000 negative on trade. When I chose the xD at 12,995 they then ask for 3 to 4,000 down and 3800 negative. Of course the problem was still my income. Before leaving one manager did state he will run the numbers on Monday. Why couldn't do at that time....more like I'll tell him this to get him to leave and not do it. After that while walking back to my vehicle the salesperson approached rudely saying I'm telling you they won't do it without several thousand down. I had to leave the dealership with a migraine, highly frustrated and probably very high blood pressure. This was the absolute worst experience I've every had at a dealership period. I know they can do it it's just they don't want to or put in the effort to make it happen. I will be shocked if the manager really runs numbers on Monday. I'm contemplating of reporting them to the Better Business Bureau. Enough said your want a car, truck or suv go to Sahara Chrysler Jeep Dodge. They will take real good care off you and not rip you off.

Eldon did a great job! He was determined to get our business. He didn't mess around and got us the best deal we could ask for. Thanks Eldon! The overall experience was great! Got 2 cars and we are happy!

No pressure at all. Did everything I wanted. Allowed me to be in control from start to finish. Very enjoyable.

Stay away from those thieves.

My wife bought a used SUV ,and they sold us an extra warranty bumper to bumper ,

Turns out that the SUV had a factory warranty bumper to bumper already and for the first 16 months we had double the warranty .well now 24 months later my warranty will expire , because they add it the mileage that it already had (35,000)to the 75,000 miles ,so basically ,we bought a 2 years warranty ,insted of 5 years.

And not only that since I wasted it one year with doble the warranty , it only left me with one year of it .

Go somewhere else ,they'll rob you

I had lots of fun and felt welcomed by all! A great experience! Tom C was an excellent sales consultant.

We're very happy with the service and the salesman was very helpful.(Tom) We would return for the next one.

My sales consultant at Centennial was very understanding about what I was looking for. He was never at any point pushy or trying to convince me of anything.

Everything was easy the way we need it-exactly what I was looking for, pleasant and easy overall. Good, nice.

It was a very good experience being treated with the kind of respect I received at Centennial Toyota. Even the finance deal went smooth. I'd do it all again. Love my Tundra.

Everything was fantastic! It was like a roller coaster ride! Very exciting! But we are all satisfied in the end.

Mike Pool and his team provided excellent customer service. Treated me like family and at no time did I feel like a stranger. Everything was explained in detail and all were very friendly as well.

It was great and very easy. Fernando was very helpful an nice. He is a great asset to your dealership.

It was a good experience for me to come to Toyota, to get my new car. Thanks for your help. The sale was a good procedure and everyone was helpful and nice.

Raul made our experience at Centennial Toyota a 5 star, very pleasant experience. Everyone was friendly and non stressful. Silver Crewmax Tundra Limited.