General Info
Maaco Collision Repair & Auto Painting is America's #1 body shop. Maaco repairs accident damage, dents and faded paint for drivers across the country, restoring the safety and beauty of all types of vehicles. Let Maaco transform your car with a new coat of paint, and soon you'll be driving the car you always wanted. Maaco expertly does away with dents, dings, and accidental damage. Our standards are simple: repair cars so expertly that no one can tell they were ever in an accident. We guarantee our auto body repair work. Call Maaco first for your auto body repair and auto painting needs.
Hours
Regular Hours
Services/Products
Payment method
all major credit cards, amex, discover, master card, visa, check
Neighborhood
Parkview
Other Links 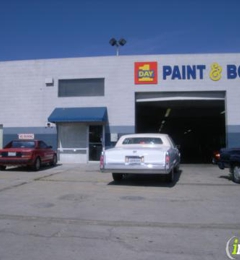 I had my 2005 jeep liberty painted(That I just bought from the dealership) the only reason I chose maaco is I saw a deal advertise for $249 so I had to check it out. I ended up paying 600 for a paint job because the $249 was a basic paint and wouldn't be as good so, I agreed to pay more for a little better quality.

I picked up the Jeep 5 days later, No inspection when I left. But the next day while having new tire pressure sensors replaced, I Instantly saw these weird cracks on the hood. I also found once I took off the visor from my hood; hidden under this visor was a tear shaped run/drip of paint ((like a glob and was hidden on purpose)). When I finally get it back to maaco Jimmy (the manager) comes and checks it out. He agrees the employee definitely hid the drip under the visor and he noticed not just the hood with cracks, but all over my roof too. He told me this is caused by someone not taking off original paint.

Sad part about this is Jimmy has no idea who painted the Jeep and says they don't work there anymore. It's a little odd the Manager wouldn't have the paperwork on employees who work for him.

Jimmy continues to tell me, that it's not covered by a year warranty ((even though if you look at their prices in-shop it clearly states year warranty)) that a year warranty really means 6 month coverage with 6 month pro rate.
But anyway, he said they would re -do the hood and roof for free, But with them being busy, at the moment, I was scheduled to bring in the Jeep in 2 weeks and they'd take about 3 to 4 days to fix their mistakes.

7 days after dropping off my Jeep, I CALLED to see the progress, I am, then told they have to wash the car so it would take them another 30mins. Which in turn I gave them an hour and when I get there to find my Jeep still dirty and was covered in white substance... Jimmy had told me white stuff had been spilled on my car while it was in the garage but it would be ok because they had inspected the Jeep all it needed was a wash. But as I went around the Jeep I noticed the limited said litmed... Jimmy then calls the inspector over and goes "you didn't notice this?" Inspector says, "no." and Jimmy says "that's ok, she didn't see it either, until now." This irked me, I am not the inspector, he should have seen it. This told me they didn't inspect my car just like before.

Anyway, they sent me down to get a car wash and also re ordered a limited replacement emblem for me. The white stuff is STILL, all over my plastic racking(also racking plastic is separating) white has hardened itself onto the rubbers around my doors and sun roof. The experience is awful and I say "is" because I still have to go pick up my limited emblem and have them put it on... and again I CALLED today to figure out whats up and sure enough they have had the limited emblem they just forgot to call.
Integrity, quality, and honesty is not one of their strong suites.