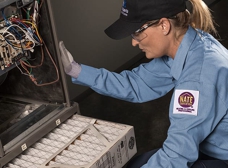 My overall experience with Finch A/C Great!!! Wish there were more people who took care of the customer & tended to business like Finch.

Not sure where this guy is or what his boggle is...but FInch A/C rocks! I have been in La Porte and have used several ac guys...what I found is that 95% of contractors do not have a clue...but Finch does whats right everytime...if not its free...

UPDATED REVIEW PLEASE READ THIS TOO!Sometime ago Mr. George Finch contact me regarding this review. He had heard from a customer that I know (still not sure who that was, not that it matters but would like to thank them) that I was unhappy about the service I received. Not only from the tech but also from the supervisor that I had spoken to back when this first happen. If it had been handled at that time I would not have post this review. However I will give Mr. Finch that he did extend a good faith measure by refunding the money we were out and has reinstated my faith in his business. I truly felt had he known he would had at that time but I guess the letter that I email and mailed was intercepted by someone else. Business owners cannot oversee every detail but when they as Mr. Finch has worked his entire life building the company he had it really is unfair that a few bad employees can ruin it. I will honestly admit if I do need A/C assistance again I do plan on giving Finch A/C another shot!
Again, Thank you Mr Finch for your assistance!
Sincerely,
Darla L
.DO NOT USE THEM!. Called them out last Thursday and a tech came out and $627.00 later supposedly fixed it. That night the house still was not cooling and called them the next morning and they came back out and said ""guess you need a new system"", Guess? something didn't sit right with me and I called someone else who came out and the contractor was not installed correctly because the tech didn't put the wire all the way on the part. He didn't even check when he came back, the new company put a new part and worked and our house was cooled within an hour. do not use them afterwards i found out from many friends not to use them. I called the supervisor and he didn't seem to care didn't apologize for it and when i asked for a refund he said he wasn't committing to anything until he talked to his tech, which is fair but haven't heard from anyone, guess their slogan ""100% customer satisfied"" doesn't apply. will be going to BBB and legal for resolution!