General Info
When you're stranded, Naylor Towing is ready to help with affordable and dependable towing and roadside assistance services in the Treasure Valley area, including Boise, Meridian, Kuna and Nampa, ID. We are a family owned and operated business with over 50 years in the towing business. All of our drivers are Wreckmaster Certified. We provide towing and hauling for:
BBB Rating
A+
BBB Rating and Accreditation information may be delayed up to a week.
BBB Accredited businesses follow the BBB Code of Business Practices and pay a fee for accreditation review and monitoring. Accreditation is not a BBB endorsement or evaluation of the business’ product quality or competency in performing services. 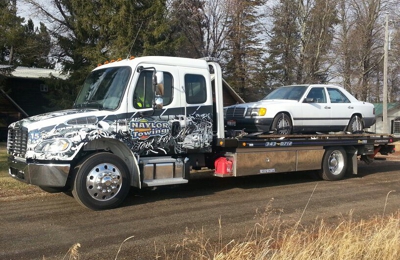 Came on a Saturday, was in my driveway within half an hour. Very fairly priced given the circumstances, they really went the extra mile. I will definitely be keeping them in my phone for future needs.

Unfortunately I have had to use a tow company several times over the past year. I used Naylor this week and they are by far more professional, knowledgeable and cleaner that the other companies. I found their prices to be much better also. Will use every time I need a tow company. Thank you Naylor Towing!

Driver went above and beyond. I was stuck on the freeway in very busy traffic. Needless to say I was scared. Fast, friendly and safe. Thank you!

Horrible experience. Would not come winch me out. I told him where I was and he told me the cost per hour. I told him ok and that he might want chains. He stated that he did not want to chain up and would not come out.

THEY ALWAYS GET THE JOB DONE FAST AND ARE VERY KIND TO DEAL WITH .

I had my car towed 3 miles and the bill ended up being $190. If that wasn't enough when i went to pick up the car the front bumper was destroyed. The transmission shop told me it was unloaded that way. When i called and asked to speak with the owner I was told he would call me. I called back the next day and left a voice mail on the owners cell phone. Two more days past and still no word. I never once received a call back. On my 4th call 7 days later i was able to speak to the owner. Unprofessional doesn't even begin to describe the way i was treated. He told me he didn't know what happened but he was sure his guys hadn't broken it and that i was on my own. He did say that i could bring it by the shop and let him look at it but that he had already made up his mind that his driver was not at fault and that i would gain nothing from it. I have told everyone i know about my appalling experience with Naylor. Avoid this company at all costs. Not only did they charge over 2x what any other company would have. They ruined my front bumper and told me I was sol. This may be the single worst business and business owner i have encountered in my entire life.