Brands
Mercury
Payment method
mastercard, paypal, all major credit cards, discover, visa
Location
On Route 202 in King of Prussia Pa. Just NORTH of the Henderson RD intersection. between TD Bank and Tires Plus and across the street from Walgreens
Other Link 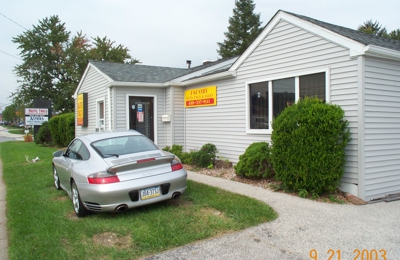 My visit to Jacoby's tags was top notch. I stopped in to title an out of state vehicle, and unlike the New Jersey Vehicle Commission or PENNDOT Richard took the time to explain the process to me and let me know exactly what I needed to do. I was in and out of his office in less that 15 minutes with all of my title needs resolved.

This is an excellent tag service. My wife and I have always been very happy with this business. In fact I will go out of my way to use them, even if I am not in the area. The staff is courteous and they get you in and out fast. I highly recommend this establishment. They are the best DMV service I have found!!

Extremely helpful staff!! Its always nice to call a business and get a real person on the line immediately. I have used this business several times over the last couple months and have yet to be disappointed . Nice location and clean professional office. Very quick service. My husband and I would drive out of our way to use this business. We are very happy with their service.

This is by far the nicest and friendliest tag service I have ever used. I visited this location several times in the past and have always had a very good experience. With that being said, I was in Jacoby’s today to get a title transfer processed and insurance coverage for a car I was buying. I happened to be in my military uniform as I am in the Marines. When the work was finished the owner came out and thanked me for my service to the country and said that my money was no good here. He then proceeded to pull out a couple hundred dollars from his own pocket and pay my insurance down payment and transfer fees in full. I know from using this business in the past that they sponsor Alex lemonade drives and do other good work for the community, but I never expected this. Needless to say I felt honored. I rarely write an online review of any business but I had to in this case. These people are exceptional!!! They have my business for life. We as a community should be thankful to have such kind and nice people to give our business to. Thank you again.

As the owner of a local inspection station and resident of King of Prussia for all my life, I can tell you that this is the top rate Tag Agency in the King of Prussia, Bridgeport, Norristown area. I have used every one in the area, and none are better then this one. They are the only Online Authorized Site in the King of Prussia, Bridgeport and Norristown Area. There used to be one in Norristown named Jack rabbit, but they were shut down about a year ago for illegal activity. They reopened under a new name, but the same people run it and I would not reccomend using them!!! They are also not online anymore and the office looks like a rat hole. I feel Jacoby's is the best of all tag agencies in the area. Any review based on price is most likely total BS, although I know Jacoby's offers a coupon on their website. I began using Jacoby's a few years ago and have found them to be the best Agency I have EVER used. Their service is excellent and the staff acutally trreats you like a business customer, which is something a lot of other agencies have forgotten. Many have started to behave like other state agencies, which treat you like crap. Not Jacoby's. I feel like I am among friends at this establishment. They are also able to provide many services that the other NON Online Agencies can't, and they do it instantly over the counter, much like Penndot itself would do if you drove out to Harrisburg and waited in line ALL DAY!!! It's also important to point out that many people who are angery with the DMV for something take it out on the tag agency, instead of the DMV and that's not quite fair. In closing, beware of many online reviews that bash one agency over another. I have found that most are good and price is the same everywhere you go. Jacoby's in my opinion this certainly one of the best!!!! I use them weekly!!! If you have been to others you'll know this the second you walk in the door.

They went out of their way more than once to get me the information I needed to change my plates from California to PA. I've never had a better experience dealing with my registration or anything with my car for that matter! I would recommend Jacoby's to anyone anywhere! I live close, but if I moved out of town I would make the drive just to do business with them again!

My husband went in to switch our tags from CO to PA. Staff was very helpful and friendly. However, we didn't have a copy of the title. They were willing to contact our loan company to request the title. When our loan company refused to send the title to them, I was completely frustrated (with the loan company). In addition to that, my loan company hung up on me 3 times while I was trying to figure out what was going on. I was ready to scream. But then I called Jacoby's, and the gal on the phone was so friendly and helpful, and understanding, well, it made me feel so much better. She was willing to work with me to get the title and I am so thankful. At least there are still companies in this world who prize customer service, and Jacoby's is one of them. We should all give our business to these establishments.

This business provides excellent service. They take the drive out of dealing with Harrisburg. My documents were handed to me right over the counter, instantly. No reason to drive to Harrisburg and spend my entire day dealing with PennDot when I can accomplish the same thing in ten mins. Prices were very reasonable. Way to go PA in making dealing with DMV very quick and easy. Got my Tags in 10 mins at my lunch break. Would highly recommend this company if you have any Penndot work to get done. Also, staff worked quickly to get me in and out fast. You would never see this with state employees. A++++++

This tag agency is the best I have used!! Excellent service and had the cheapest price I could find. Seems to me that when you read bad review, it's most likely a competitor trying to bash the business. The staff was very friendly and this place is online with the state and could process my reconstructed title and issue plates on the spot. Most others could not. Prices seemed to be about the same everywhere I checked by with Jacoby's $10 coupon on their website, they were the cheapest. I highly recommend this business

Most uncomfortable unfriendly business environment I've ever been in. Customer service is terrible and the prices are practically highway robbery. Avoid this shop like the plague.

This was the best tag service I have ever used. Most tag agencies I have been to do not take the time to really help you when your needs are complex. These guys spend over a hour working with me personally to solve a problem that I had and charged me NOTHING!! Need I say more. If you want the best service then this is your stop for DMV work, PERIOD!

Jacoby's has knowledgeable and friendly staff who are willing to take extra time to help you out and explain the title and tag process for any kind of vehical, boat or trailer. They have a well organized front office to help you take care of business quickly and effciently.

Clean office with knowledgable staff, I would certainly use them again. I had my work screwed up at a Norristown notary and when here and they took great care of me and were concerned with my problem.

These guys a friendly and very hepful when conducting business with the DMV. I highly recommend!!! They can even get you a great car at wholesale prices with their car dealer services. They have my business life!