General Info
We have been in business for over 25 years and are located in the historic River Market area. We pride ourselves on providing fast, affordable, and most importantly, quality automotive repair with a convenient location for those working and living in downtown Kansas City. For quick and friendly service, give us a call. We will provide rides to and from as needed if you're within the area. Give us a call to find out more.
Hours
Regular Hours
Neighborhoods
Downtown Kansas City, River Market
Categories
Auto Repair & Service, Clutches 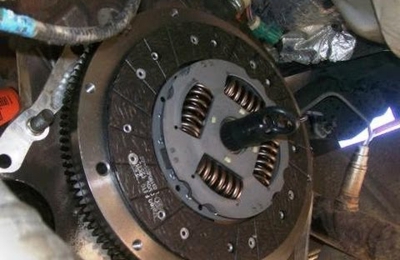 On 3/09, they told me they knew the problem. Said hoses were clogged up and this would fix the issue. That bill was a total $922.24 (of which they had charged oil diagnostics on this invoice that had been charged on the other one). I brought this to their attention and they said they would credit my account.

Leak still was not any better.

Oil was not any better. In fact it was even worse. So Christine said for me to bring it back and they would fix it and it would not be any charge to me.

I took it back on 4/10/2012. Their invoice said they replaced oil cam seal & cover (hood). Charged me $198.00 labor and $28.00 (+-) parts. When I came to pick up the car, the owner said well let me go get your bill. I told him what Christine had told me. That bill was $232.98. After several calls between her/me/and the owner, she asked would I be happy with just paying $98.00. I told her I was not going to say anything. I felt very used because I am a woman and they had no clue what was wrong but did guessing. The following week I called Christine and told her I would be reporting this to Better Business (which I plan on doing so). The leak is still not fixed and I still owe so much on the bills from Rudd Clutch that I an unable to get it fixed. I called Christine (when I was hoping the last procedure had corrected the problem), I told her I felt the last invoice for $232.98 should be all I should have paid. I asked her to think about this and to let me know what they decided.

I have not received anymore correspondence. I will NOT take my car there anymore and believe I am owed everything except the $232.98.

During the past year I have taken my vehicle to Automotive Service Pros three times for service. The first two times I had my car in for service they did a great job of communicating and repairing my vehicle. After the second visit to the shop I noticed that my cruise control no longer worked. I used my cruise control on the way to the shop and it worked, on the way back from the shop it no longer worked. So about a month later my window motor went out so I took my vehicle back to the shop for repairing the window motor and mentioned that the cruise control quit working after the last visit to the shop and asked that they take a look to see if it was something they may have caused during the last visit or coincidence. This time I did not get a call with an estimate (unlike the previous visits) but was asked if they could keep my vehicle longer to identify my cruise control issue. I told them that the cruise control was not that big of deal but if they wanted to keep it and resolve the issue that was fine with me. They said they did not like to give up on issues and wanted keep the vehicle to resolve the problem. After two weeks I was told, they believe they had identified the issue but the part was not available anymore. When I went to pick up the vehicle the bill for troubleshooting the cruise control was 1,400 dollars. Needless to say, I was not very happy about my bill of 1400 dollars for troubleshooting an issue that was not that big of deal to me in the first place and seemed to have been caused by my previous visit. I explained my concern to the shop owner (Greg) to no avail. If this post is up and has not been updated it means that I have not received what i consider a fair credit back for my cruise control troubleshooting bill.

First of all, when Mr. Graeve came in to have repairs made to his vehicle he stated he was in no hurry because he was going out of town, and there would be times he would not be able receive phone calls. When Mr. Graeve came in to pick up his vehicle he asked about the cost of the repairs and we explained the in-depth diagnoses that had to take place because of all the improper custom wiring that was done which included relocating modules, bypassing headlight switches and various other rewiring that was done prior to us receiving it â all of which is not recommended by the factory and would cause serious problems. These items had to be corrected in order to get a proper diagnoses on the cruise control wiring system. Numerous calls were made to Mr. Graeve, but were not taken and by this time we had his vehicle apart and it was occupying a lift in our garage, which was hampering our productivity. After everything was corrected in the wiring system, it was determined that the problem was with the Speed Buffer which we were unable to locate because, according to the manufacturer, it is no longer available. Mr. Graeve expressed some concern about the total balance due on his bill, however after talking about it, he seemed satisfied. Since that time, Mr. Graeve has received $1,440.00 (6-2-2010) refunded back to him. I believe we have &quot;made good with him&quot; by doing this. We harbor no ill feelings and would welcome him back at our shop.

This listing has been claimed by a business representative.
Helpful(0)ShareFlag
zx12rkaw

these guys have been there for over 20 years and it shows.these guys will take of all your needs bumper to bumper on any general auto repair.they seem to be able to get you in with no hidden costs and way below any other estimate i could get on my car.i would recommend this shop to anyone who really wants great service at a more than fair price.

Service was fast and affordable, my car was finished the day I brought it in for half the price the dealer quoted.