General Info
THE CALVERT'S EXPRESS STORY Family owned and operated since 2003. (Olathe, KS) â?? Have you gone from mechanic to mechanic, struggling to find an automotive repair and maintenance specialist you can trust? Your search is over. Meet Gary Calvert, your new go-to mechanic, whose goal is to "WOW" you, each and every time. Calvert, the owner of Calvert's Express Auto Service & Tire, has spent his entire career making the auto repair and maintenance experience as painless as possible for his customers, first as a manager in Saint Louis and then as a supervisor with a chain of Midas repair shops: nine in the Minneapolis-St. Paul area and six stores in Wichita.
Hours
Regular Hours
Services/Products
Brake ServiceRadiatorsTiresTransmission PartsTransmission ServiceTransmissions
Payment method
all major credit cards
Neighborhoods
Crossroads, Downtown Kansas City
Other Link 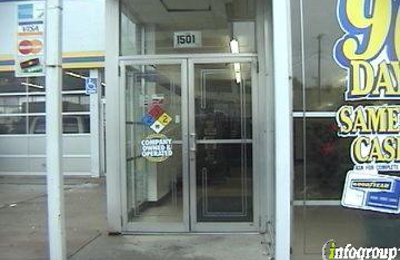 Horrendous experience. An oil change on an excellent maintained Toyota RAV ended. Up a disastrous $500 “repair” for leaking rear axle seals. They then told my daughter it was completely safe to drive 5 hrs home when she returned with the ABL lights on and noises. They were waiting for parts for what they determined was caused by a loose wire harness which was ultimately not the case. After being concerned on her drive home she took it to the local Toyota dealership, where it was explained to us that it wasn’t fit/safe for the road. It was supported by pictures and ultimately the parts that were replaced. Loose bearing, bent axles, bent control arms, incorrect bolts in the replacement(what! No duct tape?), no fluid from the leaky seals that were or weren’t replaced. $2300 additional plus days in the shop. Despite being professional in my continued attempts to resolve they have claimed The dealership was ripping me off (A+ rating for the dealership with the Better Business Bureau, fyi. An F for Calvert’s based on 109 complaints, I believe, including no response to my official complaint) and no efforts to rectify the situation since I didn’t give them a chance to Warranty their work. Which we did when my daughter returned with the issue and they can’t grasp that we were told it was unsafe to drive the vehicle until repaired. No apologies for their actions OR for placing my daughter at risk of harm. It’s a twofer with this outfit: awful performance AND the worst attempt at displaying any concern for customer service.