General Info
Welcome to America's Attic, Greater Binghamton's #1 source for decorator furniture, antiques and new mattresses. In addition, we are the largest gold, silver, coin and jewelry purchaser in the greater Binghamton area. We also have the best prices in upstate NY on new mattresses manufactured by Gold Bond. Discover unusual hard to find decorator furniture at affordable prices. Get more for your money at Americas Attic were quality comes first. We buy gold and silver! Everything from scrap gold and silver, to sterling flatware, fine jewelry, coins and bent or damaged jewelry! We purchase antique furniture, antique clocks, silver coins, gold coins, luxury watches, pocket watches, antique guns, knives and swords, artwork, antique jewelry, bronzes, vintage pottery and much more. If you are unsure if your items are of value, feel free to bring them in, and we will gladly evaluate them at no cost to you. We have appraisers on staff waiting for evaluations.
Hours
Regular Hours
Extra Phones

Payment method
discover, all major credit cards, master card, visa, mastercard, amex
Location
1/8 past Toys R Us on right hand side
Associations
Americas Attic has been recognized in the Press and Sun Bullitin Readers Choice Awards for many years in a row for the best antique store and best gold & silver purchaser in the Greater Binghamton Area.
Other Link 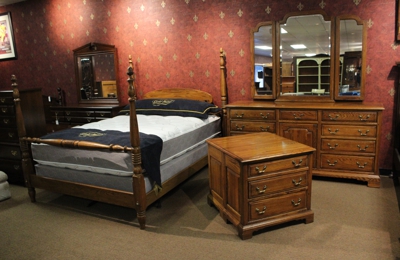 My name is Brad Kirby, Im the owner of Americas Attic. Ive been working at Americas Attic since 1994. Ive been cleaning, buying, selling and moving furniture, antiques, gold, and silver for almost twenty years. I have worn both of my hips out and had one replaced, and still to this day get on my hands and knees to clean at Americas Attic. Everyone, every customer, is welcome at my store. We treat all of our customers with respect, no matter were there from or who they are. Please stop by anytime, we have coffee, hot cocoa, tea for all of our customers. We appreciate the support we've gotten from our customers and realize we would be nothing without them.

Americas attic is a fantastic place to get used furniture at a great price. Ive furnished my whole house from there and it looks phenomenonal. The customer comes first is their policy and they seem to stick to it well. As far as one of the previous comments, I dont know where he gets off saying what he said. People of all classes are treated the same. IMO hes just bitchin. Brush that last tooth in your mouth and show some respect for a striving local business.

What a ripoff!!! The people here are rude, disrespectful and downright dishonest. I tried to buy some furniture and they told me to leave the store. I heard the employees talking about me..."some bum, ain't got no money", "Get that bum outta my store". Who do they think they are???? You can get cheaper furniture elsewhere too and their selection isn't all that great. If you are running a business....SHOW SOME RESPECT FOR YOUR CUSTOMERS!!!!!!

What a great little place! Kind, friendly and very knowledgeable honest staff! The antiques they have are amazing. I was looking for a decent priced dresser and was referred to Americas Attic by another local business. I had never heard of this place and I was surprised to see what they had to offer. I ended up buying a GORGEOUS antique chest for a great price. I also ended up buying a new mattress set and a night stand and got it all delivered for FREE! As I was getting ready to leave, I noticed a sign that said they bought gold, silver and coins and decided to inquire. After talking with them again for a few minutes, I ran home and got some old jewelry that my wife didnt wear anymore (dont worry, I got her permission!), some coins I had and headed back down there. I ended up with more than enough to cover the cost of what I bought and then some! I felt I was treated very fair. What a great day this turned out to be!

I will be returning here for my future furniture needs. I HIGHLY recommend this place to anyone looking for some great furniture and various other things.

Keep supporting small businesses as I do!

I had some broken chains and a few rings I didnt want anymore. Since I had the day off, I figured it would be a good time to see how much I could get for them. Americas Atiic was my 3rd stop. Turns out I had 22 penny-weights (i had no clue what that was or what that meant until they kindly explained it to me, along with a few other key pieces of info). I was offered $815.00 CASH ON THE SPOT and did not hesitate to accept. That was almost $100 more than I was offered in Endicott on the Ave, and about $135 more than I was offered on Main ST. The owner and manager at Americas Attic were VERY helpful and eager to educate. Highly recommended in my book.

My family has bought and sold all sorts of items from America's Attic over the years, everything from buying nick nack items, right on up to even purchasing our bed from there. They take great pride in the items they buy and sell, being sure that the quality lives up to their standards, and it shows when you look at the items on the show room floor. The bed we purchased there is the third bed we've bought in the last 6 years, with the prior two coming from another local known bed dealer and they were awful, this mattress and boxspring set has been amazing for much longer than the other two were combined!

Recently with the price of Gold soaring, and really needing money after the flood we decided to take some gold items to them. They offered to let us go in the back and have a nice private setting so people wouldn't be seeing what we had to sell. After the price was offered to us, which seemed good, we decided to shop around to make sure we were getting the right price. We went to two other locally run businesses who are also buying gold, and the experience was nowhere near as professional, and they didn't even come close to the price we were offered at America's Attic! Needless to say, we went back and got paid on the spot for what we had, and boy did it help us out!

I would recommend this place of business to anyone for any of the services they offer! They have always been good to us, and they will have us as customers for years to come! Thanks!!

UNTRUE, as far as being the best gold buyers!! They claim to pay the highest for gold. Im not sure if this is even remotely true. Anyways, I went onto their website and according to their gold payout calculator they pay around 85% of spot no matter which karat of gold or how much, which is pretty good. They claimed that they can pay higher because they have their own refiner. Well, I needed some extra money for Christmas but I wasnt about to let my scrap gold go for a low percentage of spot, so I figured Id see if they were really honest people. So I weigh out just over 9 penny weights and it said the payout was around 360 dollars, which is about 85-ish%. So I go there tell him that some other place tried scamming me before which is why I dont usually deal locally but only online and that I found their website which had a payout calculator. Long story short, this guy offers me 250 dollars. I told him that he was WAY OFF and the website said otherwise. He told me, ""um well the website is old and wrong and not based on live prices blah blah"", yeah BUT the price you entered is based on REAL TIME gold prices, check for yourself. He then said, ""gold has dropped down in price a lot lately"" I then said YES BUT ITS BASED ON REAL TIME PRICES. I told him that was false advertising and that he can check it himself and he said, ""oh I believe you, its just that the website is wrong and thats my only offer Im not raising it"". I could understand maybe a little under what they claimed but 250 dollars? for over 400 dollars worth of gold?!?! THATS LIKE 60%!! THATS A SLAP IN THE FACE!! There is a little spot on their website that claims the prices are based on an estimate but can vary, yeah explain to me how they claim around 85% but are only willing to pay 60%? I then asked to speak to the manager and he pointed at some guy and said ""hes in charge but I only do the gold buying but the boss isnt in til Monday, come back then"" and then I said thats not right and they should payout at least close to the 360 and he got red in the face because he KNEW that was a HUGE LOWBALL OFFER and walked in the back of the store. As I was leaving, I asked the ""manager"" why they are advertising false prices and he mumbled his words saying pretty much the same thing, ""we have been having problems with the website and it probably isnt live prices. We have been trying to contact the person who runs our website for a while to get that changed"" HA ARE YOU KIDDING ME?!?! I said that it is BASED ON LIVE GOLD PRICES!! Right above the box it even shows the LIVE gold prices!! He didnt have much to say at all, and I walked out. I went through this with another big gold buying place but once I confronted them, they actually paid me. Maybe the guy who owns it personally pays out more but I definitely got low balled. I could understand if he even offered me a little lower than their claimed payout, but a 60% of spot offer? Do you know how low of an offer that is coming from people who HAVE THEIR OWN REFINER?!?! Im sorry to go off, but it just REALLY bothers me that I was being taken advantage of. Bottom line, he gave me an offer of 60% and STUCK with it even after being confronted and then lied to my face about their website. A PLACE WHO REFINES THEIR OWN GOLD SHOULD BE IN THE 80%-97% payout range. There is NOTHING wrong with their website and NOTHING wrong with their calculator, its perfectly fine, you can go on their website and try it right now. I never write reviews, but this is wrong. The person who was there buying the gold knew EXACTLY what he was doing. I just really dont understand why people cant just be honest. Hopefully this review will change some things for the better. Maybes its just me but if I went in there with a bunch of gold and was offered 60%, its NOT just me that its happening to I would think. I hope this at least helps one person but again, sorry to rant and rave but this is just a pet peeve of mine. Well good luck to everyone b