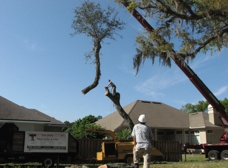 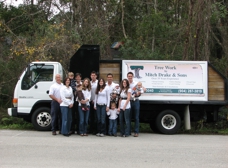 We are very pleased to be repeat customers for Mitch Drake & Sons Tree Service. Every appointment has been met on time with a very professional and courteous team. They always take extra care in avoiding damage to existing lawns and beds. Once the work has been completed the whole team scours the property and removes virtually every twig, leaving the property cleaner than they found it. All debris is removed as well, What a great experience you'll have if you choose to let Mitch Drake & Sons address your tree problems for you.

I am so impressed with Mitch Drake and crew. I first called him on a Saturday afternoon about the dangling limb and he said that he could send someone out immediately if necessary. I told him that it could wait until Monday. First thing Monday morning Mr. Drake's son, Mike, came out and removed the branch. He was clean cut, polite and professional and he did the job quickly and effortlessly. The price for that was $250.00 and it was well worth it, because you couldn't pay me a million bucks to go up that tree! Mike gave me a $2,600.00 estimate to remove whole tree and grind the stump. I thought that sounded very reasonable given the amount of work that would be involved and the difficulty of the task. The huge tree was close to my house, close to my neighbor's house and not easily accessible because of its location in the side yard and behind a fence. Honestly I didn't know how they were going to do it... A week later the whole crew came out. They were on time and all professional looking and acting. The brought out a gigantic crane to get to the top of the tree and they cut it down one piece at a time starting at the top and working their way down. For someone who's never seen this before, it was a quite a show! They used the crane to move all the logs and branches to the front yard where they were either loaded into a debris truck (the big logs) or put into a wood chipper (the smaller logs and branches). There were 5 or 6 guys total, plus the crane operator, and they worked together like a well-oiled machine. When they were done they picked up the area and used a blower to blow away too the leaves and debris. Also, I got the impression that Mike may have bid the job just a little too low, but Mitch insisted that a deal is a deal and honored the price. Very good people. Professionals, clean cut, presentable, well spoken, nice, etc. I'd hire them again without hesitation and give them the highest possible recommendation.

Wonderful service! Wonderful job! Very professional! Cares about doing do work! I am totally pleased. My trees look better than they have ever looked! Thank you so much!

Mitch and his guys could not have been nicer. They showed up right when they said they would and did a wonderful job taking down a60 foot pine that was just 10 feet from the back of my house. To make the job harder I live right on the golf course with not much room to work. They had to remove part of my fence also. When finished they cleaned up and put everything back where it belonged. They are a solid 5 stars .

We've had about $9,000 of tree removal services over the past ten years and these guys were among the best (we also praise Warmings).

We had a middling small job but they treated it seriously and did an excellent job.

My neighbor stopped to watch for a minute but was so impressed by the whole process that he watched the entire removal of three trees.

Stump grinding and all, they did a perfect job. The lawn was not torn up. Wife and neighbors happy.

Mitch and his crew were just awesome. The job included a large number of trees(big and small) was done quickly and the yard was left nice and clean. The crew was also nice and answered of my questions.

I would recommend anyone to use this company. A+