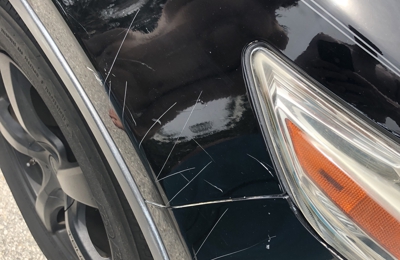 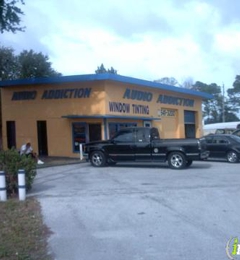 Horrible experience. I will let me husband write his own review explaining his interaction with the owner... My husbands car was scratched during installation. One of the workers apologized and spoke to owner who said they would take care of it. I followed my husband to drop his car off for them to repair paint.. Long story short the owner took my husbands car from the original shop that was agreed upon to repair scratches in paint.. it was taken without notifying my husband of the change or gaining permission. My husband found out through the original shop. When my husband called the owner of Audio Addiction (George) he told my husband he should be lucky they are even fixing it because they did not do it(after they admitted to it and agreed to fix it). Once car was fixed, I took my husband to pick it up. The paint hand one bubble in it and dirt trapped in it. There was also a portion that was not completed(it appeared to have been sanded and painted but the top coat was missing). Leaving the paint rough to touch and dull. My husband and I spoke with the owner(George) who told us to just fix it ourselves "use nail polish remover and that will fix it".. he was claiming it was overspray. Which it was clearly NOT. Then proceeded to accuse us of lying stating "we didn't do the scratches so I'm doing you a favor". In regards to the audio work.. there was a lose speaker and the door panel clip was broken and not reinstalled. The owner is very rude and condescending.

To start out I spent $1700 for a new system for my car! I was told that they had to order the stuff I needed and that they would have it there on that saturday. Well to make a long story short I went on Tuesday and spent 8 hours only to not have the work complete. Went back on Wednesday to only have to wait a additional 2 1/2 hours. My driver window still don't work, my subwoofers don't come on sometimes and if they do come on.I went back to have the problem checked out and the guy did something that made it worst. I usually don't complaine but I warning all don't go there!

So I bought some car audio equipment and went to audio addiction to have it installed because they had the lowest prices. Now I know why, they have no idea what they are doing and installed everything wrong. I had a blown speaker a day after it was installed because it was wired wrong, they forgot to reinstall a stock tweeter that is now missing, forgot to hook up the other tweeter after not installing my component speakers with the setup i had asked for, did not wire the head unit properly and even had the audacity to tell me they did it wrong and that for more money they would do it right, they lost the manual to my head unit, and when i showed up to pick my truck up 3 hours later than they had said it would be done the guy in charge smelled like he had been drinking for hours. After coming back the next day they told me there was nothing wrong with the work that they had done and that I am just an ignorant person who bought cheap equipment. Well I took my car to Best buy to have it done by professionals who took 7 hours because they had to redo all the improper wiring and informed me that the way it had been previously done was completely wrong and a fire hazard that had the smallest thing hit the wiring it could have started a fire. Needless to say now my sound system sounds like it should have in the first place. Avoid Audio addiction at all costs, pay the extra money to have it done the right way the first time!!

C'mon, really? This is the oldest trick in the book! It is so obvious you are writing your own positive reviews to save face. It's not working. You guys are a bunch of scammers and it won't be long before Karma catches up to you.

I made an appointment with them for 9:00 AM Friday. Let them know I needed new speakers installed and that I would be in a hurry because I had to leave town the same morning. When I arrived nobody was there. I waited 15 minutes past opening time and the time I set my appointmnet, still nobody, no call, nothing. Why are you in business if you cannot keep a simple appointmnet?

Not only were they the cheapest in town, they had everything I needed in stock. I was skeptical about going at first but decided to get a quote and the rest is history. I am a customer for life. They gave me a 1 year warranty on my pioneer navigation and lifetime warranty on my window tint!

I got two TVs with a CD/DVD player installed and paid a quarter of the price that everyone was giving me! The installation didn't take that long and the service was great. If you want to save money and get name brand stuff at cheap prices they are the people to use!

just got my whole car hooked up and saved $450 for the same equipment compared to other store prices in town.

as for the other people writing bad comments on this place, that is straight slander and defamation. i saw none of this when i was there, and why didnt you call the police when you saw it instead of writing this on a review forum.

Just bought rims and a flipout tv from here. They were able to order the rims/tires and i got them in less than 3hours mounted and balanced. Pioneer navigation came in next day and got installed in about 1hour. Very satisfied with service. will be back...

Audio Addiction is a store front for illegal activity. They are high when they work on your car and don't care about poor work they do. They buy and sell guns in there and the police need to shut it down. Terrible place and is unsafe to be there because of employees there.

I brought my 2002 Mercedes to have a stereo installed. A flip out dvd/touch screen. First let me start by telling you I went on Friday evening just to by the kit for my stereo and the guy convinced me to get it installed there. I agreed and mad the appointment for 9 am the next morning. I went the next morning and no one was there, I arrived 15 minutes prior to the appointment time. I went and got breakfast and returned at 9:20 and the manager owner was there. He informed me that no one was there to install the stereo. That should have been my first inclination not to go but I told the guy I would be back after work around 3:30 for another appointment. I got there and informed the guy I was there and then had to wait another hour just for the installer to start. So I waited walked outside a few times and noticed the installer was walking around talking to other people and not installing my stereo. So 2 hours passed and I went outside and the installer is in my car outside with the car running with the a/c on and still not finished with the install. I asked him how much longer and he said not too much longer. A total of 3 hours later , when I was told it should not be more than an hour , he finally finished. I looked at the car and stereo and complained that the cd changer that was previously installed was just thrown in the ash tray. I told the manager and he said he would have it fixed but it would be another hour. I told the guy never mind I will take it somewhere else and I wanted a discount for the guy using 1/4 a tank of gas. He said no and I said I will make a formal complaint , which I did . Also the install caused warning lights to go off on my console and I informed the guy again. He told me to take it to discount auto to have it reset. I informed him that only a Mercedes dealer could do it and I would send him a bill. NO ON SHOULD GO TO THIS PLACE!! THEY WERE ALSO DRINKING AND SMOKING MOTA WHILE CUSTOMERS WERE THERE AND SHOULD BE SHUT DOWN!