Call us to schedule your comprehensive eye exam or contact lens exam. Our doctors have vast experience in treating dry eyes and ocular allergies as well as managing glaucoma, macular degeneration, and other diseases of the eyes. 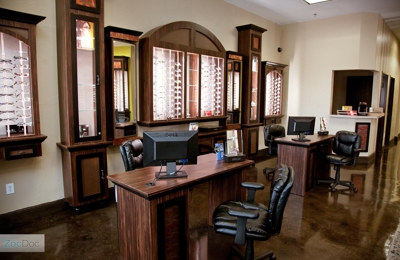 I booked an appointment several months ago and had my eyes examined for contacts. I met the Dr and did not like her from the get go. I felt rushed and she over talked and interrupted me every time I attempted to speak. After getting fitted I then went to the front desk and paid my balance in full. The remainder was going to be billed to the Insurance. I received a call a week later from one of the employee there explaining that she made a mistake when giving me the balance of my copay. She admitted that she did not understand my Insurance and she quoted me the incorrect amount. STEPHANIE said before I picked up my contacts I needed to pay an additional $41.50 dollars. I became upset only because she admitted several times during our phone conversation that it was their error. I called and attempted to speak with the Dr, however the staff there said that the Dr, does not take calls in reference to complaints. After going back and fourth with the Office Manager I got no where with her besides her bad attitude and big ego. I attempted to send the Dr. an email explaining the situation because I felt like she would be concerned with the way her staff handled this situation. I never heard back from the Dr but did here back from the Office Manager again saying that my contacts would not be released until I paid this amount. Needless to say it was been several months and I decided to give in and pay the $41.50 so I can just get my contacts. I called to make sure that they were available for pick up and the the Office Manager Stephanie gets on the phone and says because I have waited 3 months to pick them up I must also pay the $10.00 shipping fees they incurred when they had to ship them back. So lets see here!>? You mean to tell me you haven't called me to see when I planned on picking them up so you send them back and you want me to pay after everything your office has made me deal with? Well after asking her if she felt like if charging me $10.00 was a good business move she said " she would waive it as a courtesy. Point of my story I would not reccomend anyone to this practice, I figure if the Dr doesn't care then why should her staff, and believe me they don't! This place is overpriced and unworthy of peoples hard earned money!

The staff was very helpful and patient during the whole process. Danny was great and supportive through all of my indecisiveness.

It was a wonderful experience - very friendly staff! Beautiful facility!

Friendly environment & they repair glasses- did a wodnerful job! What great customer service - thank you for your help!

Front desk was a delight! :) Patty was wonderful.

Best experience I have ever had going to the eye doc! Thanks!

I got my appointment quickly. They treat you with respect and they are very friendly.

I am moving to Illinois. I appreciate everything Dr. Patel has done for me! I love her as my doctor and if I ever come back to Texas. I will definitely be back to see her.

I really like the doctor I saw!! There was some confusion with my insurance but everyone really worked hard with me to get the most bang for my buck. I also had a small problem at checkout but the ladies at the desk worked hard to get it correct! Overall a wonderful experience and I believe I've found my home for eyecare!!

The staff at Vision City are very polite, professional and are eager to express the fact that they are there to serve and to give the highest level of satisfaction and service to clients. The Doctor was extremely professional, very knowledgeable and a pleasure to meet.

this place is amazing.

same applies to the larger team. "

Vision City has to be the best optometry "sight" in the City. Dr. Patel is kind, patient, caring--everything you'd want in a health care professional. Her staff is friendly and warm. And talk about selection! Vision City has the latest in eye wear fashion. If you're thinking about changing doctors, think Vision City!

Dr. Patel is a great doctor who is totally normal and you can tell she loves what she does. Very easy! The staff at the desk was also great very helpful and courteous.

Everything about Vision City Las Colinas was fantastic. The staff was very helpful and professional. I was seen within 5 minutes of arriving and they made sure all my questions were answered. When it came to picking out my glasses they brought me many samples and were truthful when it came to how I looked in them. I will be back. They were professional, fast yet took their time, and very nice.

I lost a pair of glasses I purchased at Vision City almost a year ago. They were able to quickly pull my file and although the frames were not in stock they were able to get the glasses reordered and even provided express delivery. Both the vision tech and the young woman who completed the order were courteous and professional.

The group is always professional and helpful. They act like they have all the time in the world and are never rushed. I am bad and don't go for my appointment in a timely manner.

Very comfortable visit! Any kind of medical appointment makes me nervous but I felt at ease almost immediately.