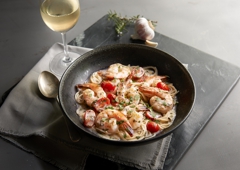 Suffered through a meal there on a Tuesday night with a party of 4 adults and 1 child. Thankfully the child was well behaved, because the scene could've gotten ugly while we waited 40 minutes for our food. The restaurant was only at 30% capacity, so there was no excuse for the horrendous lack of service. Aside from waiting 40 minutes for our entrees, the waiter never refilled our drinks, brought us caesar salads when we ordered garden salads, forgot to bring boxes twice, and didn't check on us while we waited for those 40 minutes.

We finally flagged down the manager, whose eyes darted around as he shifted his weight from one foot to another and tried to think of an excuse. He literally said ""Uhhh, uhhhhmmm...."" and looked around as if he were looking for help. Hello, he's the manager! He told us that it took awhile to get the salads together, but we looked at him like we weren't going to accept that sorry excuse. Then he told us that 1 of the entrees took 15 minutes to cook on the grill. And we said: that's perfectly reasonable, now what about the other 25 minutes we've been waiting? So he said he'd comp us a couple entrees.

When the check came, he hadn't comped us anything, so we hunted him down. He explained that he comped us the 2 side salads (at $1.99 each!). ONE DOLLAR NINETY NINE CENTS! When all was said and done, the check came out to almost $80. Would you voluntarily pay $80 for this kind of garbage? We did, tonight, but NEVER EVER AGAIN.

They have a pretty nice patio. My friends and I were seated there. This restaurant is also very accomodating. I requested to have my Dover sole cooked with capers and they gladly accomodated me at no extra charge. My friends and I also had their tasty calamari and the very delicious smothered chocolate cake. Very good place and close to some nice movie theaters, too.

TWO VISITS TO THIS CHAIN, RUDE SERVICE, VERY MANY ERRORS, RUDE MANAGEMENT, MARGINAL, COLD FOOD!! HOW DO THEY STAY IN BUSINESS? HAVE DINED AT TWO LOCATIONS WITH SAME RESULTS....I JUST DON'T SEE THIS ATTITUDE ANYWHERE ELSE!! (SEE BUCCA'S AND MAGGIANOS)
HAVE HAD OTHER FRIENDS WITH SIMILAR EXPERIENCE........