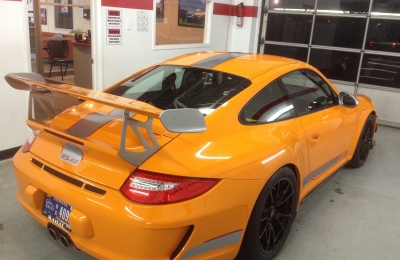 My wife's 2017 Equinox got a massive door dent in a Walmart parking lot by a hit-and-run driver. Darrings' fixed the door with their dent removal process for less than $200, saving me over a $1,000 that a dealer or collision shop would charge me. The dent was removed perfectly. The service was prompt and extremely professional...got to love this business.

I recently took my newly purchased Kia in to get the windows tinted. Why anyone would look elsewhere for any type of detail work is beyond me! Rod is the ultimate professional, a very nice guy and he does amazing work. Not only does my car look that much sharper now with this great tint job, but it also comes with a lifetime warranty of the car to replace the tint should it peel or bubble up. This is either the 3rd or 4th time I've had a detailing job done at Darrings and the job is always done exceptionally well. Rod takes care of your vehicle as if it's his very own. Thanks again!!

Unfortunately my experience was positive. Neither the exterior nor the engine was done as requested when I left car while out of town.. Not all of the bins were emptied as was told either. Upon return, Darrings offered to do the exterior and suggested a date which did not work for me. I left a message at the business number provided offering a Saturday a.m. two weeks out. Days before an employee stated they could not do that weekend because they hadn't listened to the message, they changed phone systems,and had someone else scheduled. After already driving around with a dirty car for two weeks I called it quits. I took it to Prime Car Wash on Michigan Rd in Carmel and they did a terrific job. Darrings seems to get mixed reviews on YELP and by my neighbors. They do seem to cater to sports/high end vehicles. Perhaps I got them during a serious of unfortunate episodes. I had wanted to support a local business. I also found a glob of shampoo under a rear seat before leaving the car to be cleaned at Prime. For a "regular" car I recommend Prime. I wish both businesses well but will recommend Prime.

Let me first begin by saying we will always try to go above and beyond for each person that works through our doors and treat them with the utmost respect. Customer service is and always will be our number one priority above all else as it has been the past 31 years. We do our best to accommodate everyone to the best of our abilities within reason and sometimes even without. We always treat others as we would want to be treated...fairly. If anyone EVER doubts this, please see ALL our reviews across the internet. The short version- Mrs. Harper came in for an estimate for a full detail inside and out, later called back and requested an interior detail as we recall, we performed interior detail and charged only for services performed. She claimed we were to do the whole car outside as well. Acting out of good faith we offered to do the exterior at no charge the following Saturday, her schedule would not allow that and she offered the following Saturday, but we were already booked and had been for some time. We asked about the Saturday after and she said we needed to &quot;inconvenience someone to accommodate her&quot; when she wanted. She basically gave us one Saturday to address her complaint and then repeatedly threatened to leave bad reviews online unless we complied to her demand. She even reached out to her credit card company who in turn contacted me. After explaining all the details to the credit card representative, which the credit card company was not made aware of, the representative thought we did all that we could do and that we were very fair in our offer to do the outside of the car at no charge. It was not as it we billed for something she did not receive. Ironically when paying over the phone, she never questioned why the bill was $100 LESS than the quoted amount for a full detail. It was not until she picked the car up and saw we did not do the exterior. Roderick Darring-Darring&#39;s Detail

This listing has been claimed by a business representative.
Helpful(0)ShareFlag
Linda R.

What a great job Rod and his staff did in cleaning up the interior of my horribly filthy 20-year-old Celica! The car hasn't been so clean since it was brand new. I didn't really expect them to get it that clean, but they did. They were just as friendly, helpful, and professional in their work as if I'd brought in a 2-year-old Porsche or McLaren or Lotus. I recommend them for any vehicle that needs truly professional expertise.

Darrings Detail did an excellent job on my car! The quality of work was superior, and, not to mention, it was quite fast. Rod's customer service was steller from beginning to end. I absolutely recommend taking your car to Darrings Detail!

The attention to detail was amazing! I had dog urine on my seats and floor not only did they get rid of the smell my car looks like one you buy from a new car dealer. The staff was friendly and stood by their products and also their quality of work. If you're looking to get your car detailed please take it to Darrings Detail you won't be disappointed. Love the work, and the staff. This is an A1 business

I recently brought in my fathers full size suburban that was filthy with with dog hair and mud from a marsh. The mud had gotten into the stitching of the seats, the seatbelts and all of the fabric. Rod and his crew worked overtime on this vehicle and stuck to his original price he quoted me. The truck looked fantastic! I will bring all of my vehicles to Darrings

Darring's Detail had awesome service and did great work. They came in early to meet me before I had to go to work so I could drop off my car. They removed a scratch/dent that I was concerned about and did a great job. They also fixed a dent in my front bumper for free! Everything was done on time and with excellent quality, they even vacuumed out my car! I would recommend them!

A great experience from start to finish. These folks take their detailing very seriously - I could not find a single nook or cranny that they had not cleaned, washed or polished. They went far above and beyond what I expected. Money well spent.

Hi Rod, Just wanted you to know that the work you did last Thursday resulted in a sale the next day. We're finalizing it tomorrow and I'm sooooo relieved to dispense with it so quickly. It happened in no small part because of your excellent detailing. Also, I got a call this morning from a gentleman at Capitol Cadillac who saw my flier there. He was anxious to buy, and disappointed that it had already sold. I presume that you distributed the flier, so again, thank you. Warm regards, Jane

I recently went to Darring's Detail to get my windows tinted. I have never experienced a more professional person to work on my car than Rod. He is a great guy, and my windows turned out fantastic. I will now exclusively use Darring's Detail for any other cosmetic car service I will need in the future. Overall, I am very satisfied with the quality work that Darring's Detail offered me with my window tinting. I will recommend Rod to anyone who asks me about a good car detail shop.

This place is wonderful, and Rod couldn't be a better business owner. Professional, friendly, honest, helpful and incredible service. It's evident that he takes a lot of pride in his business and I'd recommend them to anyone. My car looks better than new! Thank you Darrings!

I took my 2007 G6 to Darring's to have my car detailed. They went out of their way to make sure they exceeded my expectations and they did!! I bought my car G6 new and it looked better than when I got it!

Thanks Darrings Details for exceeding my expectations

Rod did an exceptional job for us in the sale of our car. He handled everything from start to finish and did so in a very professional manner. He kept us informed and completed all the paperwork. He is very conscientious and thorough.

I've been taking my cars to Rob and his crew now for over 3 years, and they never disappoint. Each and every time I take a my vehicle to them they meticulously detail every nook and cranny. I can tell you that I've been to several detail shops and dealerships across Indianapolis, and you won't find the quality of service that Rod Darring and his staff provide anywhere else!!

My career choice causes me to travel for a living. You can imagine how dirty my automobile is after a long trip. Darrings crew does an outstanding job keeping my automobile like showroom finish. There prompt professional service is second to none.

Anyone who is series on adding life to their automobiles interior and exterior should consider Darrings expert services. Well worth the investment.

First time at Darring's. Detail. They cleaned up the interior from 5 years of kids, spills and dirt. Great work, fast and reasonable price. Looks better than new!!

Rod and his staff are highly meticulous when it comes to cleaning your vehicle. My Benz looks like new! Worth every penny. Thanks, Rod.