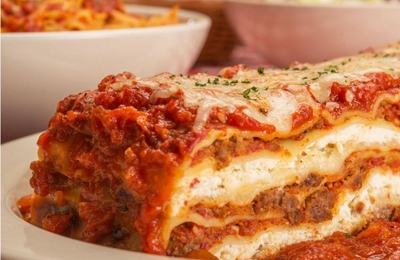 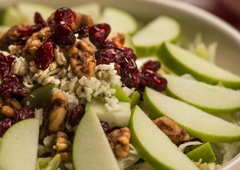 General Info
If you are looking for an Italian Restaurant in Indianapolis, IL then come to Buca. Our Italian Restaurant serves Authentic Family Style Italian Food. On North Illinois Street, near Monument Circle in the heart of downtown Indianapolis, IN, Buca di Beppo is the destination for authentic Italian specialties served family style. Our attentive staff will serve up heaping helpings of all of your favorite dishes prepared spe-cially for you by our team of talented chefs. Relax among our fun and funky dining room decor while you dine on delicious Italian pastas, entrees, and pizzas. Whether it’s dinner for two or the entire extended family, we make sure that every meal you share with us is memorable. No matter the size of your party, we’ll make you feel like you’re part of our family. We’re also the absolute best when it comes to catering. We have a variety of specialty packages created just for you or you can customize your own menu. Call us to reserve one of our semi-private dining rooms for some of those special events coming up on the calendar, or simply come to your Indianapolis Buca for lunch or dinner today and let us make all of your dining and catering reservations while you’re here.
Hours
Regular Hours
Payment method
amex, discover, master card, visa, cash
Price Range
$$
Neighborhood
Downtown Indianapolis
Other Links

Had a small Christmas lunch. The food was awesome. Our waiter Rico did an outstanding job. Very accommodating and very personable. Will be coming back soon.

My favorite place for italian

I celebrated my 60th birthday at the Indianapolis Castleton location with 5 family members. Everything was fine until they brought the dinner for me and my daughter-in-law. When I told the waiter it was the wrong order, he took it back and was not friendly about it. After 20 minutes, they brought our food but everyone else had already eaten. It was another 25 minutes before the waiter came back and took our desert order. Then another 20 minutes to get it. Then another 20 minutes to get our check. Then another 20 minutes to get our change. We felt like the waiter was punishing us for asking to bring the right order. Five days later I called the Manager at the Indinapolis downtown location and complained. He was nice and said he would send us some gift cards for the bad service. They never came. I then sent a letter off to Buca's main office. Still no reply. Just terrible, terrible service all the way around.

The food is very plain, the pricing is rather high for the quality

We went here for a birthday celebration. With the exception of the salad, the food was mediocre at best. The atmosphere is noisy and the service was below expectations.

I've been to Buca 3 times now, 2 of which I took out due to the worst customer service in town.
The hostess does not give a slightlest effort to smile at the guest. Plus, there is always a frowny guy standing by the host stand and stares at you like you're nothing but a trouble. I never felt welcome there.
The food is OK. Not bad, not good, just OK. Could be better for those prices...
But the customer service is unacceptable....If you're looking for place where you will feel welcome - do not choose Buca.

the food is GREAT

if you leave hungry is your own

First out was the salad, which was of good size, it should be for $10.00, however i felt cheated out of the items that are traditonally served in an antipasto salad because it was mostly lettuce. On the salad there were 8 small triangles (a slice of luncheon meat cut in quarters) of pepperoni, and 8 small triangles of genoa salami. The provolone cheese was wafer thin (also looked like it was cut from deli cheese) and diced. There were no artichoke hearts, and only 2 pieces of roasted peppers. The garlic bread ($10.00) was a huge dissapointment, the menu did not state that it was made from fococcia. And it is served in a pizza pan, inverted, so when you take a slice and bit into it, you are suprised with the hunt of onions and red peppers baked into the underside of the bread, which isnt all that bad, except that the sliced garlic on top was way too overpowering so you didnt taste the onions and peppers up front, it was more of an aftertaste. Because the bread was baked in a pan, it was very doughy and not crisp, it was just unsatisfying. My chicken saltimbocca(18.00) was perfectly cooked, the cutlet was nice and thin, however the recipie is completely flawed. Nowhere on the menu does it mention that ""capers"" are included in the dish. Needless to say with the proscuitto (also cured in salt), and the numerous capers, my chicken was similar to a salt-lick, while my fettucini alfredo was perfectly al-dente, the alfredo sauce nor the pasta had seen a grain of salt....??? Also, for $18.00 the portion size was small, 2 small chicken breasts.,..couldnt have been more than 5-6 oz each. The only dish that was well recieved and i felt that i got my moneys worth was the chicken parm kids meal, my nephew loved it and ate it all, and at only $5 it was a steal because the portion size was bigged than our chicken saltimbocca. FYI - soft drinks are $2.75 - we wont be returning and reccomend that you avoid Buca at all costs

We ate here on a Friday night around 6pm with a party of 5 - We were seated right away and served quickly. The food is plentiful to share, but is ala carte so everything must be ordered separately (e.g. bread/salad/meal) which adds up quickly. The ambience is unique - not the best Italian in town, but definitely worth a visit.

It is better to go with a group or a large group, due to the family style portions. The meatballs are huge and a conversation starter, but are very bland. Overall if you are looking for good italian food your wasting your time and your money here!

I have been to Buca in Louisville, Castleton, and downtown. I love it. My seven year old loves the pictures on the wall, and trying to find the bathroom. Its a little congested, but im sure like visiting family. Wonderful for groups of 4-6. Everyone will leave full and with leftovers. I dont reccomend the pizza, it was a little boring to me. My husband doesnt care for the spaghetti, but the chicken is wonderful.

We make a point to go to Buca everytime we visit my brother in Indy. It's not really good for two, but you can always take it home. The Food is Great, I love the Garlic Cheese Bread. If you have room for dessert the one with the 2 types of Ice Cream and Pistaccios is to die for. We have never had bad service and even the hostess that takes care of TOGo's makes sure you have everything before you leave.
Excellent

Im not saying it is the very best Italian food in the US, but it is defintately one of the best. I am native Italian born. Moved here when I was 12. Its impossible for me to belive someone didnt like the food there. IMO they dont know anything about the cuisine

I had not thought to find such a cozy and old-world atmosphere in the center of a major city, and do not be fooled by the exterior. From the charming first generation italian staff to the home-made lemoncello, this restaurant is by far my favorite in IN. All the food is Family style servings, and no matter where you sit you have the best seat in the house.

For those of you who have not been to Buca recently, they now offer small portions which is GREAT for parties of 2-4!! For those people who do not like Buca first of all it is REAL IMMIGRANT ITALIAN FOOD!! Do you know what immigarnt means? For those who want real Italian food go to Italy than perhaps your craving will be meet. For those who want a real fun and exciting night go to Buca di Beppo.

GREAT!!!
Bucca's has the best southern Italian food in town. I go to Greenwood Bucca. The servers are alway happy and everyone makes you feel like family. My husband and I go for the Bucca Due when it is just the two of us. Chicken with lemon and manicotti. The chicken w/Lemon is awesome and the manicotti is so moist. I have friends from Italy who have gone with us, they say it is really like southern Italy. Anyone who doesn't like the food has went to to many american italian restaurants like Olive Garden and does not know what authentic cooking is. Just let your server help you order and remember tipping should start at 15% and go up. They only make $2.15 an hour.

Just becuase they give you ""lots"" of food, it doesn't mean it's good!

If you've never been to Bucca, be forewarned that it is not a good idea to go for a party of two. You will pay a bit more for an entree than you might have expected because you are getting portions made for large groups of people to share. Getting smaller portions is impossible. However, if you want a lot of left-overs, this might be your spot!

you have to go in, wanting to have a good time.
Don't come here in a bad mood...
Because once you walk in, it's like your best and
worst relatives, all slinging spaghetti to the
festive music. Be ready!! Bring Family! And Enjoy
their delicious food!
p.s. try talking Italian to your server. They love it.

this is clearly NOT italian food. The wine tasted like vinegar and the food was very generic.