Our law firm was founded on three principles, Integrity, Imagination, and Hard Work. 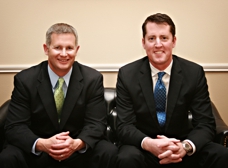 Great lawyer I would highly recommend to my friend and family.

Very professional and patient and understanding

Joe was my lawyer and I was very pleased to have had him as my lawyer. Kimmie was great too. Any questions I had they were there to answer. It was a long process especially through this pandemic but they never gave up. They did not stop working. They even tried a new proceeding that they have never done before to get my case close and it worked. That showed me the dedication that they have for their client. I would definitely recommend Terry & Thweatt Law Firm.

I was treated with respect and honesty throughout my whole process with terry. His paralegal Kimmy is AMAZING at what she does. I would recommend them to anyone who is in need

Great team who care about their clients and will fight to get everything you deserve. Family oriented and patient but never backed down from,a fight. Terry and Marie stuck it out the whole time even though the insurance company kept dragging their feet. Thank,you all for helping me

Joe Terry was our lawyer for our car accident case. I'm not sure how our situation would have turned out if it weren't for Joe and Marie. The individual who hit us was making the process very difficult from the beginning, however, Joe never gave up on us or our case. They were very prompt with their responses to any and all of our questions, and they always made sure they were available to communicate if we ever had any concerns. If you're looking for help with your car accident case, they are definitely the ones to call!

I was looking for someone to take a case that we are trying to fight and we were getting no where with many other law firms in the area. I then stumbled across Terry and Thweatt and what a difference! Mr. Thweatt is a blessing! His response time was amazing and he is VERY informative. Without getting into all of the details, he spent time on our case and did not bill us for his time. If you are looking for honest lawyers, this is the firm to call. Thank you for all of your help Lee.

Excellent lawyers! Went in not knowing what to expect. Have never had to use a lawyer before but found myself in a bad situation. Took everything to Joe and he said we could try but that it was not a normal case. Joe went above and beyond my expectations and helped me resolve my issue in more ways then I ever expected! I would use him again in a heart beat.

I retained Joe Terry as my legal counsel after being injured when an 18-wheeler pulled out in front of me. There aren't enough words to describe the professionalism exhibited by Joe and his team. They stayed on top of my case, and kept me informed every step of the way. Their experience with navigating the legal system is second to none. In the end, they were able to secure a sizeable settlement for me. If you're in need of a personal injury attorney, I can highly recommend Joe Terry.

I am 100% satisfied with the representation Joe Terry provided for me in my personal injury case. From the moment I contacted him, he took over and my stress level was relieved. He and his assistant, Kimmie, kept me in the loop with minimum interruptions to my daily activities. They handled it. My settlement was cleared in less than 9 months. Their compensation was fair, and I received a settlement that was beyond my expectations. I am thankful for making a difficult process pain free.

I cannot recommend an attorney more highly than Joe Terry. My husband was injured on a barge at work (and subsequently terminated). Life as our family of 4 knew, crumbled in an instant. Workman's comp covered my husband’s initial medical for 8 weeks and then their insurance company decided to close the case although the Dr. they picked never released my husband to return to work. We went to the DOL (Department of Labor) who suggested we obtain counsel. After meeting with Joe Terry, we were confident we were in exceptional hands. Joe filed a lawsuit against the companies responsible for my husband’s injuries and got us a great settlement just before we went to trial, which helped us put our lives back together. Joe’s legal assistant, Marie, is awesome. She is extremely responsive and easy to work with. Amongst the other injuries, it turned out my husband needed neck surgery. After his surgery, both Joe Terry and Marie called to check on him. We really felt cared for and not just "another client". I highly suggest Terry & Thweatt.

We were referred to Terry and Thweat after a car accident, and we most definitely understand why. Kimmie, Joe and the other office staff who handled our case were amazing and turned a stressful situation into a stress-free one. They were all very helpful in addressing any questions or concerns we had, and were always extremely prompt in returning any emails or calls we made to them. If a need for their services arises, you will very pleased you hired them ����

Once more, the staff at Terry & Thweatt delivered exceptional legal counsel and impeccable client services. We had previously retained the services of this law firm on a separate occasion through the advice of another attorney. Needless to say, we found ourselves in a situation that, once more, required legal counsel. And as expected, we were not disappointed. Counselor Terry is perhaps one of the most competent legal advisers I have had the pleasure of dealing with. As usual, they handled all aspects regarding our case in a very thorough and effective manner. We were very satisfied with the outcome of our case. As a result, we would only consider utilizing the services of this firm on all future similar circumstances that require legal counsel. Thank you again.

From the beginning Joe Terry was very patient and knowledgeable with my difficult case. They went over in detail step by step the specifics of my case and took very good care of me as their client. Thanks for your help and I am very pleased with my results.

While working in Houston as a Consultant, my husband was in an auto accident. Not knowing anyone in the area my husband reached out to a few different attorneys, but selected Joe Terry on a hunch and he and his staff have been extremely helpful and we received a settlement that he believed was acceptable.

Attorney Joseph Terry worked on my case and it was a bit difficult but he was able to see it through and assured I received justice in my claim.

The Terry and Thweatt law firm in Houston,TX have been very helpful and diligent in helping my mother and I by getting our case settled quickly. Our lawyer, Terry sat us down with us and helped us understand our deposition process and settlement breakdown. Overall the law firm had great communication and made us feel comfortable in the lawsuit that we were involved in. I definitely recommend using this law firm for any type of personal injury accident or lawsuit. I will keep them in mind for any other accident that I may be involved in.

I would like to Thank you and your team for all the hard work to get my case done. Thanks for checking on 2and making sure everything was done right.

I used Terry and Thweatt for my Auto accident claim. Joesph Terry went above and beyond what I expected from any attorney. He took the time to explain things to me and he fought and got me the most possible . I would recommend them to anyone who needs legal help.

I am so pleased with my services from Terry & Thweatt Law Firm. They did an excellent job on my case and I would recommend them to anyone I know!