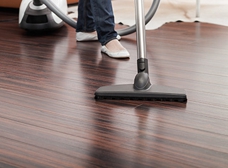 For over a decade, I have always taken my vacuums and appliances to M & M for repair, In fact, I have bought several vacuums at the shop. I have always had good service, reasonable prices, and a good turn around time.
Recently, I took my Bernina sewing machine in for repair. When it came back, it still had the same problem. So, I took it in a second time. I told the M & M employee that I suspected there was still a minor issue with the tension, but I had other, more major concerns, like the fact that the fabric still bunched up when I sewed and the needle swerved to the left when I sewed. Once he had written down there might still be a tension problem, he decided he was finished. When I tried to tell him about the more major problems, he interrupted me several times and acted as if he was more interested in doing the least amount of work and most interested in getting me out of the shop. In fact, I had to ask him to please write the other major concerns down and stop interrupting me because it was the second time I had asked M & M to fix it, and he complied. (I think because I couldn't see when he was doing). Then when I asked when I might expect to pick my machine up, he said he didn't "fix sewing machines" and was unwilling to estimate. He seemed totally unconcerned and in a hurry to finish.
When I went to pick up the machine later that day, he brought it out, and I asked what the problem was. He said he didn't know because "he did not fix sewing machines." He then grabbed the machine, started marching out the door with it to put it in my car, and I followed.
This employee was rude, condescending, impatient, uninterested, and uninformative. He acted like he was doing me a favor for just taking my service order.
I am assuming he was an employee, although, for all I know, he might have been an owner. He was tall, older, with all white hair. Because of him, I will never do business with M & M again.

This just maybe the best place in Houston for all of your vacuum cleaner services and sales. Very professional and knowledgeable along with friendly customer service. Great location that's easy to find.

The owner of the shop where we purchased our Riccar vacuum passed away and I consider myself lucky to find Rodney at M & M Vacuum Co. He promptly and professionally resolved my problem and even took the necessary time to show me how to remove the brush that needed to be replaced. I will return for a maintenance checkup on my machine to ensure that it continues to work well.

I have been doing business with M&M for over 20 years. The owner Rodney, is friendly, accommodating, and honest. He will help you find the ideal vacuum (and accessories, supplies) that best fit your particular needs. I have bought both new and re-furbished vacs from Rodney and have always been more than satisfied. Shop here first and you won't need to go anywhere else.

I had bad experience. Initially I was told my vacuum will be fixed in 4 days. When I called after a week, I was told it will take another 7-14 days. After 10 days they finally called and told me to return my vacuum because they can't get the parts needed to fix. This is very unprofessional.

I have been very satisfied with the service provied by M & M on the repair of my vacuum. The products (vacuum cleaner bags etc., have alway been available. The owner treats his customers in a very polite manner.