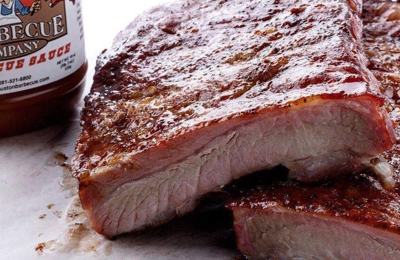 This is by far the worst BBQ place ever. I was given a fixed menu with no choice; The brisket, a link and pinto beans with some stale bread. The brisket was like shoe soles, the link went into the trash as it was oily and shriveled up. The beans were tasteless and worthy of garbage disposal. The bread was old and dry, it was a shameful disgrace. They don't even have coke in the soda machine, they have RC, how cheap!

This place is serving barbq on a shoestring budget, and they nickel and dime you for the condiments like 60 cents for pickles or peppers. The best thing about the place is that personnel was friendly. The barbq wasn't bad, but there are just so many other barbq places that are so much better, why settle for this mediocre rendition? I went there with a girlfriend and her husband because it was close by. We tried a variety of items: sliced brisket, ribs, ham, and sausage, and sides of potato salad, beans, rice dressing and slaw. The best thing was the potato salad, and I certainly wouldn't return to a barbq place just to get the potato salad, and there are other places that have better potato salad. None of the meats had good smoked flavor or any kind of flavor. The sausage was of poor quality and dry. It wasn't even worth eating the small piece that I tried. The ribs and ham were just OK. My friend's husband said the meats were dry because we were there past regular lunch hour, 1:30 PM. Give me a break! I might have agreed with him had it been 3 or 4 PM. The rice dressing had a little flavor, but I wouldn't bother eating it because the rice was overcooked and mushy. I've never had dry coleslaw until today, and I just don't understand that. Aside from the meat, the sauce can make the difference in good barbq. I don't know what their sauce was other than wet because it certainly didn't enhance the flavor of the meat. It was served in individual pepper sauce type bottles at each table, and it had the consistency of pepper sauce--watery. I suppose it could be called a vinegar based sauce, but I am not sure. I finally had to ask for ketchup to try to make the meat more tasty, and I was given a handful of packets. The food was edible, but who wants to eat at a place with just edible food?

My comment about barbq on a shoestring stems from their serving the meat on pieces of butcher paper, charging for condiments, skimpy portions, and the brand of soda they serve. I had ordered a diet coke, and was given a cup. When I got to the soda dispenser, the only cola that was available was RC cola. I'm sure that was the cheapest contract that they could get, which is fine, but I think the server should have said up front that they did not have Coke products. When I asked for a refund, the lady offered me a can of Diet Coke, of which I was glad, but I think $2.25 is a bit steep for a single can of Coke. The prices were slightly higher than other barbq places, ie., Goode Co., Pappa's, Gabby's, and Brookstreet, and that would be OK, if you're paying for the convenience of the location, and the food was good, but when the food is mediocre, the portions are skimpy, and they nickel and dime you for condiments, it's not worth your time and money to eat there. I hate to be so critical of an independent owner, because I appreciate free enterprise, but they need to make some big improvements. Bottom line, you can get a much better barbq meal just 15 or 20 minutes down the road, and it's worth it to make that drive.

You will find this restaurant to be one of the best in Houston. The owners are there everyday during the week and talk to the customers like they are family. The food is consistantly very good. The only problem you may have is the long line at lunch. Go early or late but just go. The reviews posted here are not believable since I have been a regular customer since they opened about 10 years ago and I know what I know. When you go, you can try a little of several meats if you like. It is sold by the weight, so you decide how much to eat or spend.

My dear Jerry 4400, the only nice thing about this restaurant is the entrance and the interior, all the rest is very forgettable. Of all the BBC restaurants in Houston this must be the worst, no doubt. I tried it. Very consistent. Consistently bad.

We love barbecue and our favorite barbecue place is Good Co. But, we're always trying different Restaurants. So we decided to try this one. The place is kind of nice and inviting. So we were three and ordered. To begin they served the food in a piece of brown paper. ( not even my dog eats from a piece of paper). the first bad signal was the amount of food, which was not very much and the price, $45.00 was ridiculous. The food was terrible and when we were half way eating we noticed a foul odor from the food. So we told the guy serving the food and he said the that was the odor of barbecue meat.?????? Well, we demanded the money back and they said the couldn't do that and that there was not anything wrong with the food. I have never demanded my money back when I don't like the food in any place. But for the first time a felt robbed. this is a very sad place in many ways.

I don't understand some of these posts. I have eaten at Houston BBQ regularly for over 6 years. The food is always consistant and top quality. My office orders in for meetings occassionally and the food is always very good. You should give them a try for yourself and see if you agree. Try the brisket and ribs. Those are my favorites. I sometimes get the chicken on Mondays. (Start the week by being good!)

Three of us ordered for the 1st time from this place as takeout. First, the food was priced considerable higher than the online menu indicated. Second, the food was cold and quality lacking. The sauce was refrigerator cold. The loaded baked potatoe was such a joke it made my laugh, it only came with cheese and meat, where does the ""loaded"" definition come in. Furthermore it was maybe 1/2 of a potatoe (very small) and did not even have the skin on the potatoe, it was room temperature (no condensation even formed in the container). To top off our dining experience the pecan pie was a real treat. The resturant has a sign bragging about the daily homemade pecan pie. It was a round pie wrapped in plastic straight from a volume club store.

Don't waste your time, appetite or your money. We will never try this one again.

What a disappointment...meat was cold and really difficult to chew. Sauce came in a bottle and porded out like watery ketchup. I certainly would not recommend this place to my friends or anyone else.

First, a Loaded Potato Bowl, and a COKE 10 OZ BOTTLE $10.50, not a good value. I felt violated for my money. Menu is very limited. Sorry, our party of three will not be back.

I have absolutely zero to complain about here.  I'll be back many times in the future

this place is pretty good and definitely somewhere I will return when I get a craving for bbq but don't have the time to make a trip up to Austin.

I work very close by Houston BBQ. Co. and I have been going there for 3 and a half years. I am European and I have travelled extensively around the world. I certainly appreciate good food and authenticity. The owner and staff are always extremely friendly and professional and they wok hard to ensure you get the best quality product and service. If you know of any better brisket in town let me know. I have been looking and I have not found it yet. This is a place where I would take visitors from the other side of the pond so they can experiment second to none BBQ.

Recently, I took my son and daughter-in-law along with my grandchildren to your restaurant for dinner. The food was excellent. You can count on the fact that we will return there again soon. Keep up the good food.

I've moved to Alaska and man do I miss your food!!! Nothing here even comes close! Keep up the great BBQ!!!!!

Always great! Food is great, service is great, I always make a point to stop in when I'm in town for business.

Excellent service and even better BBQ menu! The best BBQ restaurant in Houston!

My favorite BBQ restaurant in Houston. It's very old school so don't expect tons of sides like Mac & Cheese, etc. This is a BBQ place, not Luby's.

The brisket is very consistently flavorful & tender. The sausage is awesome, especially the jalapeno sausage.

My wife made a recent visit to this restaurant and ordered some food to go. After overcharging her for the food, she brought this to the attention of George, the man who serves the food. My wife in her southern charm, called the man sweetheart and brought to his attention we were overcharged for food. He said, ""Don't call me sweetheart b--ch.""

My wife was appalled, I'm glad I was not there. What an unprofessional, insecure man, poor little George. I have talked to other African Americans who have also been treated poorly, but none have been called the B word to their face.

The issue was brought up to management thru e-mail, and they refused to apologize or correct the situation, and did not even give my wife a reply to her e-mail.

On top of it, this BBQ is nothing out of the ordinary that you couldn't get at any other BBQ joint that uses oak in the firebox Overrated, and extremely rude.