"Wholesale Prices for your Ride" 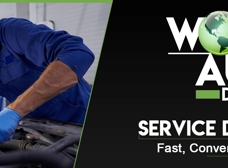 I ended up buying BMW 2008 model from Drive with Pride showroom at Bissonet. I saw their advertisement in newspaper and found it a good deal. So decided to visit with my friend checking if thats real or some play trick. But what they advertised was really available with no hidden fee. I ended up buying another car from me. Great Deal! I must say.

Thank you Drive with Pride for helping me and my family to get the vehicle that meet our family needs in terms of size, and down payment, also to build our credit. the internet sales campaign was effective.

Thank you so much from the Parham Family.

A very time management and excellent with ease yet professional. An excellent team with patience. A shout of Blessings goes out to Mr.Farris and Mr. Wayne. Beautiful facility and hospitality. Awesome and Beautiful Cars and well service. A very nice location too.

OUTSTANDING DEALERSHIP WITH NICK MULLAS , NIKKO AND JB AS VERY PROFESSIONAL, ENERGETIC AND ASSETS TO THE ORGANISATION.

EXCELLENT SERVICE FROM THEM....THANKS FOR HELPING ME FIND A CAR FOR ME AND MY FAMILY.EVERYONE WAS HELPFUL.

Absolutely the easiest car buying experience I've ever had, ever! The whole process only took a couple of hours. Our sales rep, YaYa, was great and a pleasure to deal with. And even with my horrible credit they got me into my dream car! Very pleased and would recommend them to anyone for a fast & easy car buying experience.

It was a pleasure during business with them,they are very knowledgeable place and great customer service

Very easy to work with. We were in and out in a little over an hour.

I believe the dealer has a Great Team of Employees & are working Very Hard to Help Houston get some Nice Cars with Financing Too...

I am very content with the decision I made by coming here to "Drive With Pride". The sales person (Nicholas) and creditors were quick to help me choose and finance me despite my current credit situation. They did the best they could even though I wanted better but at the end I got the deal and the car I wanted!! I feel blessed and I wouldn't change anything but a walk-around the car inspection that I should have done before the purchase, but yet, I'm not a mechanic and I don't expect everything to be perfect because it is a used car, sooo...

I had never heard of this company until my coworker recommended me to them. I was pretty spectacle at first. But as soon as I walked in, I was greeted immediately and a sales rep was also assigned to me at that moment. I was not sure that I would qualify for financing, but regardless they still offer options to get you in to a car. The whole transaction was very easy, pleasant and efficient. I want to personally give thanks to the representative "Taha" for giving such a spectacular service. He was very friendly, knowledgeable and patient with me. I would definitely recommend going to Drive With Pride. Great staff as well as Cars.

My experience at Drive with pride was great. Taha was very helpful and got me through the process quickly.Service was friendly, prompt, professional! Taha did a good job.

I just brought Hummer H3 2006 from them, trade in my old Hyundai for a better price taking letter of appraisal from another dealership. They matched it for me without any question and then we negotiated on Hummer got this unbelievable new like SUV on financing at 2.1% APR. Chris really helped! Thanks..... between what is thanksgiving deal? any elaborations on that.

My husband and I went here to trade in two of our cars for an 2007 Acadia. From the very beginning salesman Alex lied saying we would be able to trade both cars in even though we still owed on one. We brought in our cars to get appraised and they told us we could take home the Acadia for the time being. Alex also told us that the payments would be below 400 and that we'd only have a 2.5% intrest rate. We left our cars with them for a week and during that week, every time we tried to talk numbers we got the run around. The day we went in to sign the paperwork the financing person tried getting us to sign the paperwork without telling us about the financial aspects. Then when we wanted an explanation he told us the car was going to be 19k and that our interest percentage was 21% and the payments were 523$ for 60months. First of all on Kelly blue book the Acadia was only worth 16k so we refused to sign. The next day when we went to get our cars and money back we found that the navigation/dvd/cd player screen was smashed in and when we confronted Alex because he was the one who test drive it and had saw it wasn't like that when we gave it to him, he said he never paid attention to it and didn't know what happened. Then when we went to management they said there was nothing they could do. It was a horrible experience and just so wrong of them. I couldn't believe a professional business would do something like this to someone.

I purchased a used vehicle from Drive With Pride. During the test-drive, I noticed air was leaking from the tires. I informed the Sales Representative, Chris and he guaranteed the issue would be resolved during the 120-point inspection by an ASE certified mechanic. Later that day, I returned to complete the purchase of the vehicle. Apparently, the only thing that was done by the mechanic was putting air into the tire to stop the wheel sensors from going off.

The day after the purchase, I called and spoke with Josh Milan, who promised to rectify the situation. I took the tire/rim to a local Rim Shop that Josh recommended and the technicians explained that the rim was cracked. They were unable to repair it because it was previously welded in too many different locations, compromising the metal. I called Josh to see if another rim can be purchased as a replacement. He said he spoke with the owner, who is not willing to do anything more.

I have not been able to safely drive this $20k vehicle in the month I have owned it. After further investigation, Drive With Pride sold a vehicle with 4 multiply-cracked rims! How this was missed during the "120-point inspection" is a good question that they are unwilling to answer. Family-owned business? This is a major risk by putting MY family (and other drivers) at risk with this vehicle. The licenses plates have not even come in yet and the vehicle is on a spare, sitting in the garage. I have heard of distrusting used car salesmen, but this is compromising the safety of customers and drivers! What a horrible tragedy!

I brought Mini Cooper 2010 in Blue from Drive With Pride. This is such a lovely smart and compact car I wanted, got a better deal and APR rate using my credit history, staff was courteous and knowledge equipped. Thanks!!!

Was tired of continous engine knocking in my Chrysler, did two vehicle inspections and estimates were around 2240 and 3500 for engine tools replacement and strut fixing. Some body referred me to Drive with Pride - Service Centre. I took the car and after 1 day of through vehicle inspection they provided me in depth issues cost of parts and services charges, whether I provide them parts of they brough it, I took the sheet, surveyed parts online and felt they have fair prices. Got into repair for just 900 and fixed every thing, nice smooth running car with a week up now. I feel they are just loyal people and know how to work bieng expert.

Trade in my old Jaguar 2002 with 2012 Mercedes Benz, What a wonderful pricing they provided me at best APR I never expected from any dealer although I have bad credit history due to some homeloan repayments delayed. I am fan of their service and honesty and highly recommend to other customers.

I got 2012 Altima from Drive with pride today, The car just looks like brand new for the value I got is comparatively very less than what other houston car dealers are offering. I feel like I lot of other cars as well are very competitively priced and one should come here with full pockets because every other car is beautiful and I will likely buy another one for my wife after six months.